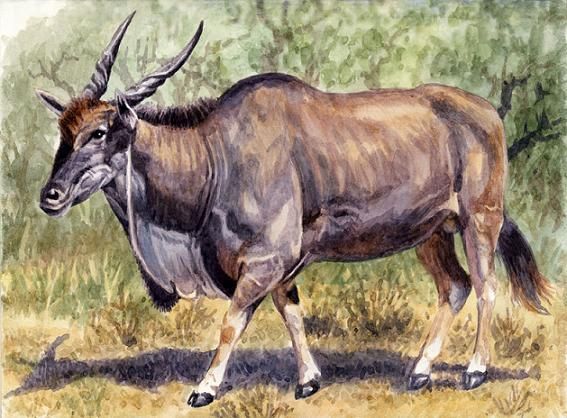 The Eland, with the scientific name Taurotragus oryx (meaning "pick-axe bull goat"), is one of Africa’s two largest antelopes, the other one being the Derby’s Eland, Taurotragus derbianus. Both of these antelopes can reach 900 kg/2000 lbs in weight. The name 'Eland' comes from Dutch and is originally the name of the European Elk (what is called a Moose in America), because that was the biggest deer they knew from Europe, and the Eland was the biggest sort-of-deer-like-animal they encountered in South Africa. Elands are more ox-like than deer-like in appearance and are actually closely related to cattle, buffaloes and wild oxen. They’re also closely related to Kudus, and the other spiral-horned antelopes. Elands differ from kudus in having shorter and less impressively spiraling horns, smaller and narrower ears, and being much bigger. Elands especially in the more tropical parts of Africa have white stripes along their sides, but these are frequently very faint or absent in southern Africa.

With a body as big as an eland's, you'd expect these antelopes to be ponderously lumbering around most of the time. In truth they are surprisingly light on their feet. We have elands in the Polokwane Game Reserve, and they are quite skittish. I rarely get to see them close up; the slightest sound or movement can send them running off at a good clip. Even when just walking they easily outpace a human. (They make a strange and still unexplained clicking sound as they walk; some people have suggested that this is due to the two halves of the hoofs clicking together, while others think it might be something in their joints.) They are also incredibly proficient leapers! They regularly manage to clear farm fences 2m/almost 7 ft in height. They can also clear a distance of 2.5m to 3 m/8'-10' from a standing start. Their compact bodies contain some seriously powerful musculature.


The Life of an Eland 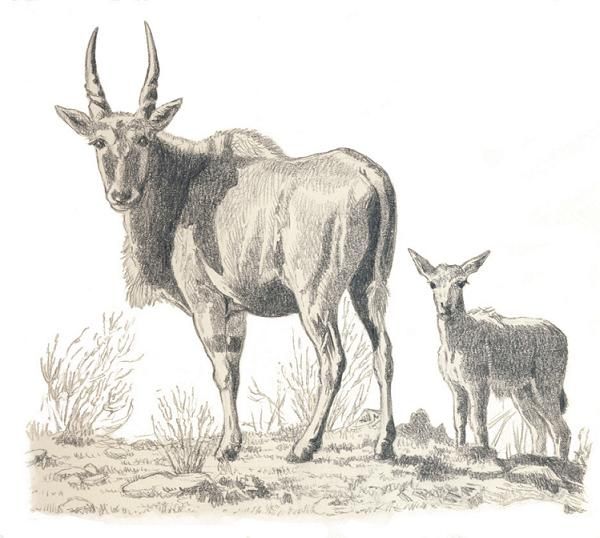 Another aspect in which elands are unusual is that they display little difference between the sexes. Both bulls and cows have horns. Those of the cows are longer and more slender, while the bull has shorter but thicker horns, with heavy ridges along the spiraling edges. The bull is also larger, with a thicker neck with a bigger dewlap hanging down below it, and he also has a tuft of stiff, reddish-brown hair on his forehead. This tuft exudes an odoriferous secretion from glands at the base. The bull also often occurs in isolation, while cows group together in herds, sometimes joined by just a bull or few.


During the rutting season the bulls, buzzed on testosterone, become very aggressive. This phase is called 'ukali'. Bulls in ukali will warn each other with aggressive displays, and fighting rarely happens, but when it does might be fatal. They try and intimidate each other by showing off their size, and bellowing. The huge dewlap hanging down below the bull's throat and chest makes him seem very large when viewed side-on. Bulls keep growing more massive all their life, the dewlap also getting larger and larger, finally hanging down like a curtain below the body. The brush of forehead hair also continues growing, eventually extending down the face and nose.

Elands are browsers, able to tolerate tough and aromatic leaves and herbs. They'll also eat Marula fruits and Thorn Tree pods. They'll sometimes eat the flush of juicy, fresh grasses that emerge at the start of spring, or after a bush fire. They use their horns to break branches off tall trees and shrubs, so they can get at the leaves. They inhabit open woodlands or well-wooded savannah, and in Southern Africa have also come to adapt to open grassland and semi-desert shrublands. They don't need to drink, being able to extract as much moisture as they need from the foliage that they eat, but will appreciate good drinking water. They are absent from the Namib, which is a harsh, true desert. They change their social organization seasonally, living in large herds in fairly open regions in the wet season, but breaking up into smaller groups going into the denser bush during the dry season.


The reason the cows form herds is for the protection of the calves. These are quite cute with a rather fuzzy-looking fur. They are born in the summer, and spend a short period lying hidden in the bushes as the mother feeds. They gain size very rapidly, eland milk being extremely rich. The youngsters have strong social instincts, and as soon as they gain the ability to feed independently start forming temporary calf- and juvenile groups, numbering up to 50 individuals. These are the kernels around which cow herds later form. In the herds the animals are ranked by age and size. Herd membership is not particularly exclusive, animals being able to join and leave as they please. Herds may join with other herds, sometimes forming temporary herds of as many as 1000 animals, in response to environmental factors such as an abundance of food in one particular area. Young elands move around much more, the older ones being more settled in particular herds in specific areas. Even eland bulls sometimes join together in groups, but these rarely exceed six or seven bulls.


The San people, or Bushmen, held the eland in high regard. Of course to them it was first and foremost a massive amount of meat on the hoof, but they also imbued it with spiritual qualities and depicted it with reverent detail in their rock art. It is sometimes seen as a manifestation of the god /Kaggen, who might also appear as a mantis. The Bushmen have eland rituals for hunting, marriage, and divination.


Elands and other spiral-horned antelopes belong to the branch of the bovid family that also contains buffaloes, bison and wild oxen. They are also related to three weird Asian species: the Nilgai, the Four-horned Antelope, and the Saola. All of these together comprise the Bovinae subfamily. The Bovines are relatively unspecialized compared to the other antelopes, gazelles, goats and sheep which fill out the rest of the Bovidae family. This is a quite ancient group. The African members have been evolving separately from the Asian ones for about 15 million years. The Eland itself seems to be descended from a kind of giant kudu that lived in Africa a bit over a million years ago.