Okay, so now I’m a published author. This is really cool. I can buy a printed copy of my book from the publishers, or even get some high street bookshops to order it in. If I was a bit more of a gadget fan, I could download it onto a Kindle, and soon get the ePub version from iTunes or for a Nook. It’s no longer a world where you send your manuscript off to numerous literary agents in the hope that one of them won’t send back a rejection letter, but will instead take it on and send it to a publisher. No, these days you can publish it yourself and save the horrendous wait by the letterbox each morning for yet another formulaic letter saying "Thanks, but no thanks." 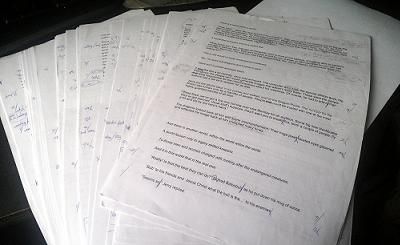 By self-publishing you get far more control over every aspect of the book, you get it to be just exactly how you want it to be. The flipside to this is that you have to do every aspect of the book. Writing the story is just one part of it. There’s then the editing (and if you thought Peer Review could rip an entry apart at times, hand a manuscript to an editor!) then the typesetting, the cover design and the promotion. And you will have forgotten something.

I handed the final draft of my manuscript to my wife - who is an editor and proof reader – hoping that she’d pick up on the little bits of grammar I’m useless with. I know for a fact I keep switching tenses when I write. When she handed me back the first chapter, it was quite embarrassing. There were so many marks and notes that I felt I was back in school, in the English lessons I never really did well in. You see, it’s not just spelling that a good editor picks up on, it’s things like using the same word repeatedly near each other. Then there’s things like timespans; at one point in the story I had a meeting being called, and everyone being there the following day. Yet this wasn’t actually possible. There’s no way of deciding late night in London, and then having people travel down by train, or fly in, for the following morning. Even though it flowed and worked with the narrative, there’s just no way it could work in the real world. And, although the book is kind of a fantasy book with mythical creatures in it, I wanted it to be believable. So that had to be changed too. And then there were the things that just didn’t make sense, or seemed out of place. These involved a bit more of a discussion, working out whether to rewrite those pieces or cut them out altogether.

In short, what I thought was my final draft was actually anything but. It was my first, finished draft, and then the editor got at it. All the amends were made, another copy printed out, and then the first round of proof reading started. This was when the spelling mistakes were picked up, along with inserting new paragraphs and making sure that quote marks were the correct opening or closing ones, it was surprising how many of those were wrong!

When we were happy with the text, it then moved onto typesetting. I’m lucky again here in that for one job several years ago I was trained how to lay things out for print. This involves finding out the book size you want, working out what you think would be to good margins, remembering that the margin closer to the spine needs to be larger, choosing a font, choosing the size of the font, the indent space for the first line in a paragraph. All little things that you need to think about and decide upon to have a book that actually looks like a book.

Plus there’s the cover. You can actually buy a cover template with fancy artwork and space for your title and author name. Thing is, it then looks like pretty much every other generic book cover out there. So I wanted something plainer, that would stand out because it looked cleaner. I liked the idea of a small badge in the corner of a white cover, and my rough sketches had this looking pretty good. The problem was, I can’t draw a believable badge! However, I could send the badge design off and get some made. Books aren’t the only things you can get made in small quantities now, for a few quid I had ten badges in five different designs that I could then photograph and use on the cover.

So now I had the text and the cover, ready to print a bound proof! Except I wasn’t. There’s a dedication page, a copyright page and an ‘about the author’ page too. I’d forgotten about those. These are “little things” that a literary agent or a publisher would know, but because I was self-publishing, I had to learn what to put into them, on the plus side though I could word them exactly how I wanted.

There’s definitely more control when you do everything yourself, but as you can see there’s a lot more to do. Even when you’ve then got your bound proofs, your first proper idea of what the book’s going to actually look like, and you’ve made your tweaks and changes, and got your next printed copy, there’s then the promotion side of things to do.

A literary agent and publishing house will take care of a lot of this for you, they’ll get your book into bookshops and tell people to buy it. They’ll sort out reviews in newspapers and magazines, and oh yes, reviews?! Another thing I forgot.

I decided to put a website together (www.nopandas.com) with a few very short stories on it, using some of the characters from the book, or at least set in the same world. These meant that anyone who wasn’t sure about the book could have a taster, and they were mostly ideas I had for the book that didn’t make it into the final, final, final draft. I also put an excerpt from the book on the site too, so people could get an idea of whether or not they’d like it.

But the problem still stood, getting people to look at the website. Thankfully, being active on Twitter I was introduced to book bloggers. If you have a contract with a literary agent, they’ll arrange for Advance Reader Copies to be sent out, read, and for reviews to get put on sites like Amazon and Goodreads. If you’re doing it yourself, you have to know who these people are, and convince them to take the time to read and review your book. I had massive help here from one individual (RangeWoman) who seems to know almost everyone on the internet. She retweets and promotes a lot of the Guide stuff because she’s a Douglas Adams fan, and she put me in touch with a few people to read and review my book.