A memorable Christmas from Freewayriding.

The Ghosts of Christmas Past 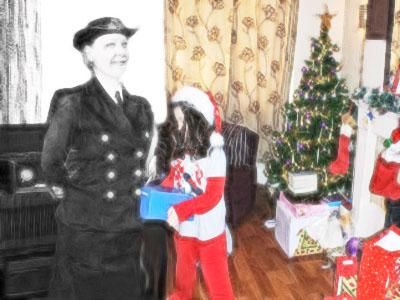 We knew it would be her last Christmas. In her very late eighties and suffering from a host of physical frailties. The most debilitating and saddening was the deepening state of confusion and distress caused by her dementia.
I must hold my hands up at this point, to be perfectly blunt I had massive (and slightly Scroogey)doubts as to the suitability of dragging my wife's grandmother out of the EMI to sit at the family Christmas table,she'd probably scare the kids and ruin everyone else's festive mood.
That said, the thought of her sitting in the day room waiting for her long dead husband to visit and worrying when he failed to arrive was also unbearable.

So she was duly given permission from the unit to join us for a few hours. I hadn't seen her for a few weeks and the obvious deterioration in her wellbeing was shocking, my wife visited her every day and hadn't noticed the downhill plummet as much.

Throughout most of the dinner she remained quiet, distracted and refusing to eat, soup went cold, starter untouched and drinks knocked over by unsteady, trembling fingers; children giving each other sideways glances and tears coming unbidden to most of our eyes.
On to the main course when she suddenly sat bolt upright, that spark of 'being present' in her eyes.

'Now where on earth did you find all this?' She eagerly drank in the sights and smells of the traditional Christmas dinner 'Haven't seen a spread like this for oohhh...'

You could literally see her sorting through what remained of her memories, the kids now happier that she was finally talking.

'I can't stay all day, the boys will be back on leave soon, do you mind if I take some of this for them, beats Army rations?' My mother-in-law and wife had been told to encourage her to remember the here and now and give her prompts to help her cognitive processes when she became confused. 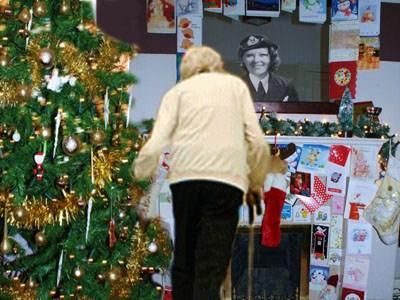 My kids, however, had other ideas; both had been studying WWII at school and started asking questions about rationing and what Christmas was like during wartime.

Eyes well and truly ablaze with memories, she began to talk, we spent the next hour or so devouring both Christmas goodies and, more satisfyingly, her Christmas memories.

Tales of munitions factories, air raids and war rooms merged with queuing for sugar, homemade rabbit pies and decorations made from newspaper. It wasn't just the children that were captivated!

By the end of the meal and she began to get tired and the spark dimmed. Just before she left I wrapped a couple of slices of Christmas cake up and with a wink, snuck them into her coat pocket and asked her to share them with the girls when she started the evening shift.

The wink in return and the delighted hug from this old lady who was now firmly back in her teens was one of the nicest Christmas presents I've ever had.

Family memories are what makes Christmas special for us, even if you do have to go back to 1942!