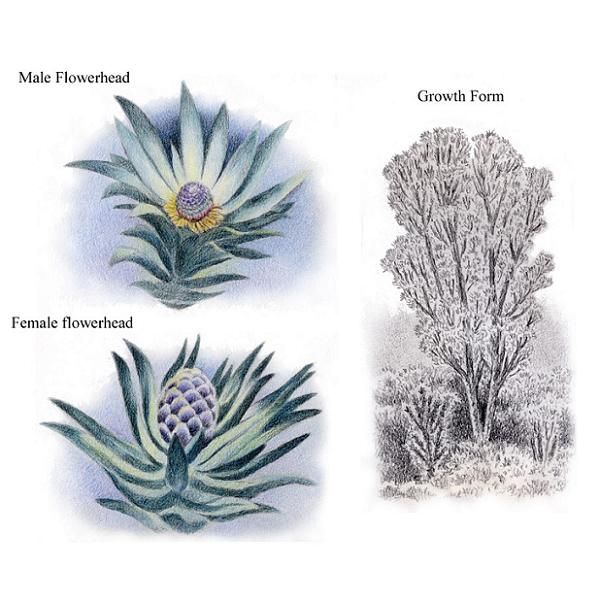 I've written already about two species of amphibians restricted to the environs of Cape Town: the Table Mountain Ghost Frog and the Western Leopard Toad. Here they are now joined by a plant species also restricted to the Table Mountain and the Cape Peninsula region: the Silver Tree, Leucadendron argenteum. Its scientific name reflects its beautiful foliage, meaning 'Silvery White Tree'.


My previous entry treated the Welwitschia, a conifer that in ways resembles a flowering plant. Here now we have a flowering plant that resembles a conifer! This species, as well as its relatives in the genus Leucadendron bear cone-like 'flowers' and 'fruit'. You can see this in the female 'cone' I illustrate (in the genus male and female plants are separate). But this is not a real cone – it is not even a real flower. In Leucadendron the flowers are small and borne in compact flowerheads at the tips of branches. Behind the flowerheads are leaves that in many species become brightly coloured and spread out and look similar to flower petals – these being most conspicuous in male plants. In female plants the flowerheads have bracts (modified leaves) that cover the real flowers and are tightly pressed together forming a cone-like structure. After the real flowers are pollinated (in the silver tree this is done by small beetles), in most species the 'cone' remains on the plant as the bracts become hard and woody. They can stay that way for several years. What they are waiting for is fire! In response to the fires that every several years sweep through the fynbos, the cone scales will shrivel and open and the ripe fruits will be released. These fruits are actually dry, often light structures that help the seeds in them blow away in the wind. In the silver tree the fruit is a small nut with the dry style of the flower still attached, as well as long hairs, which make a little parachute that carries it with the wind and deposits it in the ash, where the bush has been cleared and where it can germinate and grow as soon as the winter rains start falling.


In several other species of Leucadendron not only the cones are very similar to those of conifers like pine trees, but also the leaves! They, too, have needle-like leaves, these being excellent for reducing water loss over the long, dry summers the fynbos experiences. But the silver tree has quite different foliage. It has long and lance-shaped leaves, covered with silky, silvery hairs. The hairs are loveliest in the dry summer, when they lie flat and sleek against the leaf surface. As the leaves blow in the gentle breeze the entire tree seems to shimmer. But when the rainy season starts, the hair on the leaves 'stand up', and their surfaces look dull. This is because in summer the hairs pressed tight to the leaf surface help to slow down the rate of water evaporating from the leaves; in the rainy season this is not necessary, and also the leaves now actively work to form nutrients by photosynthesis, so the hairs stand up allowing water vapour, oxygen and carbon dioxide to flow freely to and from the leaf surface.


Silver trees are the largest members of the genus Leucadendron. They are also the most tree-like. These trees reach a height of 16 m/about 55 '. They have upright branches and narrow crowns. Other members of Leucadendron tend to be low and shrubby. They are very characteristic members of the fynbos, the vegetation of the southwestern Cape of South Africa. They are members of the Protea family, which has a very high diversity in the fynbos, and includes many spectacular flowering species – although these flowers are in fact compound inflorescences. The Protea family is also very diverse in Australia, in regions with a similar winter rainfall climate, although Australia has many more tree-like species than South Africa, where the vast majority are shrubby.


This tree species is remarkable for occurring naturally in such a very small area. It is only known from the eastern slopes of Table Mountain and the Vlakkenberg ('Low Mountain') at altitudes between 150 and 330 m (500 to 1100 ft). The tree is actually quite hardy and can survive in areas outside of this range, even in different climates. There are two additional populations around Paarl and Stellenbosch, but these might not be natural, instead deriving from trees planted by people long ago. Nevertheless it is good that there are some other populations as well. A lot of the natural distribution range of this species has been destroyed or degraded by the invasion of alien plant species brought to the Cape by the Dutch and British. But the remaining populations are being monitored so the tree is unlikely to become extinct. They have short lifespans, about 20 years or so, and adult trees are often destroyed by the fynbos fires. But at the same time they are adapted to reproduce after these fires, and in the ashes of the dead trees many new seedlings germinate. It is important though that enough time should pass before another fire to give these young trees time to grow up. So fires that happen at intervals of about fifteen to twenty years are ideal for this species. Fires not only trigger the release of the seeds kept in the cones in the canopy of the trees, they also trigger the germination of seeds lying in the soil (many of which are buried by mice in seed-caches). Like many fynbos plants these respond to the heat, smoke and possibly also to the increased sunlight from the plant cover over the soil surface being burnt away. A small number of seeds are however also released from the cones even if no fires take place, and these can still germinate if they find favourable open spots to land in.

This species is beautiful and its foliage and flowerheads often used in floral arrangements. The small male flowerheads that dry out after pollination are woody 'balls' that can be used as bases for ornaments, for instance to make little hedgehog figures. I don't have silver trees at the moment – I don't really have space here. But if I had a larger plot of land I certainly would try them. They need well-draining, acidic soil and a sunny position where the air can flow freely around them. These trees, although growing in a region experiencing extensive summer droughts, can grow in summer rainfall regions but need extra water in the winter in such a case. They need frost protection in winter if grown in cold regions. They can be grown from seeds but also from cuttings taken from the stem tips. This species is very vulnerable to a fungus that attacks its roots. Care has to be taken not to damage its roots, and it is therefore a good idea to transplant seedlings directly into the soil after germination rather than growing them in bags in the intermediate period, since every step of transplantation can damage the roots. Also it is important not to dig or disturb the soil surface around the trunk and all the way to the drip-line of the tree canopy. Artificial fertilizers or too much heavy manure can end up burning the tree. Rather than that, a mulch layer on the soil around the trunk can be very valuable.