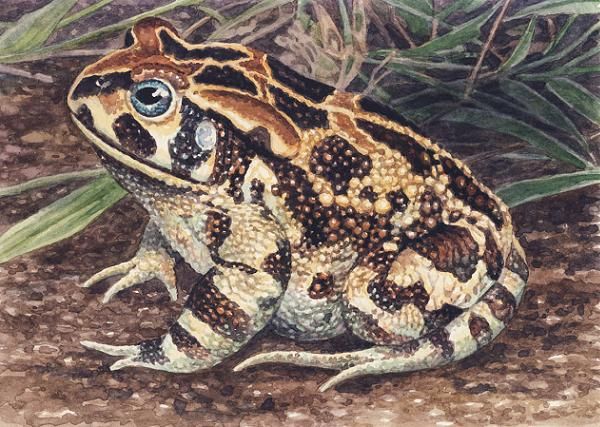 Today I have for you a watercolour painting of a Western Leopard Toad, Amietophrynus pantherinus. This is South Africa's largest toad species, and in my opinion also one of the handsomest, with its reddish to dark brown patches outlined with yello on a creamy background. It reaches a snout–to–vent length of 14 cm/almost 6", with a fat, round body and stout limbs. The face is short and bull–like. Like in many toads, there is a pair of large glandular bumps behind the eyes extending to over the shoulders, called the parotid glands. Smaller raised glandular bumps, the so–called 'warts' of toads, are all over the upper side of the body. As in most toads, these glands exude toxic secretions that protect the toad by making it unpalatable to potential predators.


The Western Leopard Toad has a close relative, the very similar Eastern Leopard Toad, Amietophrynus pardalis. The two species both occur in the very south of South Africa; the Western species mostly around the Cape Peninsula, while the Eastern species occurs from the eastern part of the Western Cape into the western parts of the Eastern Cape, mostly close to the ocean. The Western species has a much more restricted distribution. Its natural habitat is fynbos, a unique type of vegetation of woody shrubs with small, hard leaves that is exceptionally rich in species and is mainly restricted to the Western Cape. Here these toads seek out deep water for breeding. Come early Spring, they will spring into action. Because this is the easiest time to see this species, they're sometimes called August Toads. Actually the season can start any time from late July to early September, depending on when the first warm weather kicks in after the winter. When the time is right, the males will seek out positions on the banks of lakes, marshes and ponds from where they call to try and attract females. Their call is a loud snore lasting a second, and repeated every three seconds. Should a male succeed, he will 'hug' the female from behind – actually this clasping is called 'amplexus' – and she will lay her eggs into the water. The eggs are in long strings held together by a jelly–like substance, within which the embrios look like small, black blobs. As she lays them the male fertilizes them from above. The eggs hatch into tadpoles, that later metamorphose into small toads in typical fashion.


Because of their very limited range of distribution, and the massive human population in and around Cape Town, these toads are rather endangered. Luckily there are several nature reserves around the Cape Penninsula preserving the natural habitat. This is good not just for the toads, but for myriads of other unique animal and plant species that are mostly or entirely restricted to this area. Nevertheless, the toads do face human–created problems. When they spur into activity in Spring, many of them cross roads on their way to their breeding pools, causing some to be flattened by cars. Fortunately there are many Capetonians aware of these toads, and there is even a volunteer effort every year during the toads' breeding migrations to actually help them safely cross the roads! The volunteers will carry as many toads over the roads as they can, flag down approaching motorists, and also collect population data in the process.


Apart from roads and cars, the movements of these toads are also hampered by other human–created obstructions such as walls, electric fences and canals. Then there are exotic species brought by people into their habitat, like ducks and alien fish species. Human alterations of water features also may cause them a loss of suitable breeding habitat. Nevertheless these toads are adaptable, and some can now be found in gardens and other suburban environments.


Toads are on the whole a group of amphibians about which we still don't know much. The leopard toads (both species) belong to the family of True Toads, the Bufonidae. Biologically, there is no clear distinction between 'frogs' and 'toads'. 'Frog' is simply used mostly for the prettier, more graceful, less warty species, while 'toads' are for the squatter, less agile, more warty species, but in Nature, these factors are of no significance when it comes to actual relationships. The 'True' Toads are all called 'toad' and do have visible similarities, and indeed do turn out to form a closely related group, but the relationships within the group still need a lot of work to figure out. These days genetic studies augment morphological examinations, giving us a clearer picture. The leopard toads used to be included in the genus Bufo which included the majority of species of toad and ranging from the Americas to Europe, Asia and Africa. This genus has now been split up, which is why the leopard toads along with a few other African species are now classified as Amietophrynus. Again we are starting to understand that there is a lot more diversity than meets the eye. Toads, although they may look similar, are an ancient group that has long ago already divided into many different assemblages which spread to different parts of the world where they evolved even further. We are lucky to have here in South Africa several different genera of toads. Apart from this, several others are also restricted to very small natural ranges and consequently in need of conservation. In this regard knowledge is power: the more we can understand their uniqueness, the better we can inform the public, the more awareness we can raise, and the better our chances of protecting them.


An interesting feature of toads is that the males have an anatomical structure called 'Bidder's Organ'. This, when stimulated under specific circumstances in the lab, can become an ovary and produce eggs – effectively turning the males into females. But we don't know if that ever happens in Nature, and whether it does or not, what the Bidder's Organ is actually for.