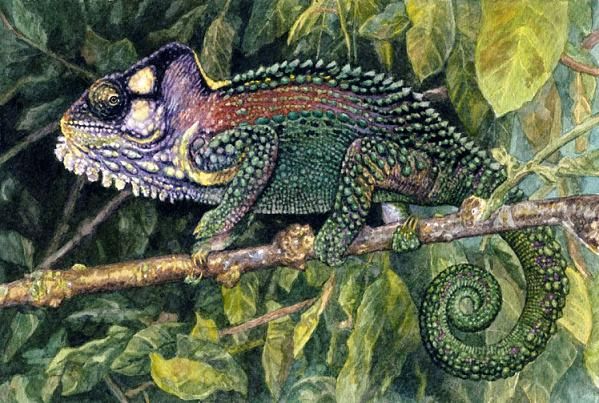 This is one of South Africa's prettiest chameleons – indeed one of its prettiest animals all told. Its scientific name is Bradypodion damaranum. The genus name Bradypodion means 'slow-footed' (since like many chameleons they typically walk with very slow and deliberate steps) and its species name damaranum means 'from Damaraland' – which is incorrect! This species comes from a region that is just about the opposite of Damaraland: the moist temperate forests south of the Outeniqua and Tsitsikamma mountains of southern South Africa. Damaraland is a dry desert and semi-desert region much further to the north, today in the country of Namibia. The scientific name came due to a mix-up … a specimen of this species was misinterpreted as having been collected in Damaraland. Because scientific names are fixed once established (except in cases of reclassifications or when older, more legitimate names can be proven), the mistake cannot be corrected.

These forests are the most extensive and beautiful in South Africa. They are characterized by trees like the Outeniqua Yellowwood and others that grow very large such as the Cape Ironwood, Stinkwood and White Alder. They exist thanks to the mountains that run parallel to the coast, causing moist air coming in from the ocean to rise and condense as rain. Also this region lies in between the winter rainfall region of the southwestern Cape and the summer rainfall region, which is the rest of the country, and consequently receives rains all through the year. These rains are soft and mild and not excessive except on some of the higher mountain peaks. Because of this region being in the far south of South Africa the climate is pleasant and cool. There are forest reserves and hiking trails throughout these forests and they are popular with tourists.

Few visitors see these chameleons, though. They often stay high in the forest canopy, but even when coming down to the shrubs and bushes in the understory can be hard to spot. Like all chameleons they generally are experts at hiding themselves. This is not so much due to their ability to change colours as to their 'default' coloration being dominated by greens and browns, as are their leafy natural environments. But like most chameleons they can put on very colourful displays, in which cases they show intense red, yellow and purple hues on their faces and bodies, as in my painting. I go into the colour changes and displays of chameleons in my previous articles on the Flap-necked Chameleon and the Panther Chameleon. The Knysna dwarf chameleon, like those species, is adaptable and sometimes enters densely-foliaged gardens in and around its native habitat.

The genus Bradypodion is entirely restricted to South Africa (and the small countries of Swaziland and Lesotho partially or fully enclosed in ours) and consists of perhaps twenty species, although there might be more. Some like the Wolkberg Dwarf Chameleon, Bradypodion transvaalense, might be species complexes of many related forms living close to but separated from each other in different forest patches. These are all small chameleons, ranging from 10 cm/4" to 20 cm/8" in total length. The dwarf chameleons show a great degree of variation in colour forms as well as their ornaments – the crests or casques they have on the back of their heads, their throat crests, and prominent scales or tubercles they have on their backs and sides. But they never have horns on their heads like some other African and Madagascan chameleons. It is still difficult to decide how to classify them. The greatest variety of species live in the southern and southeastern regions.


The most interesting characteristic of the dwarf chameleons is that they do not lay eggs, but give birth to 5-15 living young. In truth they do have eggs, but these hatch inside the mother's body. She bears them inside her for about three months while the babies develop. They are only about 2 cm/0.8" in length at birth, but can fend for themselves immediately and receive no care from their parents. They are so small that they are at risk even from insects like spiders. They themselves hunt very small insects, and if they survive their perilous childhood they attain maturity in about nine months and can live for 3-5 years in total.

The Knysna Dwarf Chameleon is one of the largest of the dwarf chameleons, reaching 20 cm/8", but most of its length consists of its proportionally very long tail. It can curl this up, but also often walks along branches with its tail stretched out straight behind it. Like other species it shows a lot of individual variation in the basic colour scheme. In the wild there are no identification problems, though, since it is the only chameleon species to inhabit the Knysna forests. There is only a question about the relationship of a separated population that lives in the Grootvadersbosch ('Grandfather's Forest') region further to the west near Heidelberg, which might actually be a different species. The Grootvadersbosch dwarf chameleons occur alongside another species, the Little Karoo dwarf chameleon, which doesn't enter the forest however but remains in the fynbos patches around it, and which is also smaller and different in shape.


In shape this chameleon typically shows a high casque on the back of the head as well as a very prominent row of scales running along the midline of the throat crest. There are also rows of prominent enlarged scales or tubercles along the side of the body and along the midline of the back and tail. There are two light patches that can be white, pink, yellow, orange or reddish on the side of the head, patches of yellow through orange and red to violet and bluish along the flanks, and most distinctively a patch of yellow, smooth skin around the armpit region. In its displays it is one of the most colourful of the dwarf chameleons.