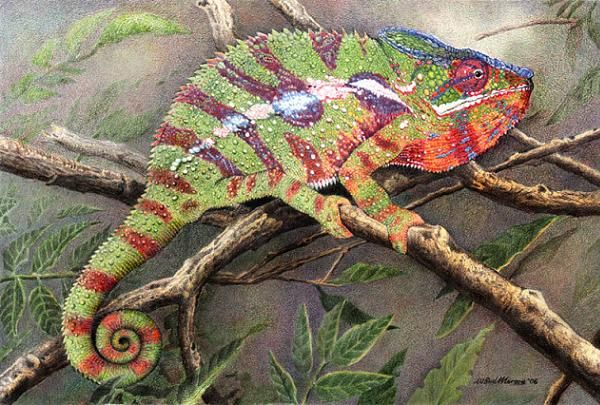 We have another reptile! This one is a Panther Chameleon, Furcifer pardalis. This one comes not from South Africa but from Africa's huge neighbor island, Madagascar. It is one of the largest chameleons, males reaching 50 cm/20" (but females only being about half as big) and also one of the most colourful.


The panther chameleon's genus name, Furcifer, means 'bearing forks'. This refers to its feet. Chameleons appear to have only two toes on each of their front and back feet. Actually, these 'toes' consist of fused groups of toes; on the 'hand' there are two fused toes on the outside and three on the inside; on the 'feet' it is three on the outside and two on the inside. But there are still individual claws sticking out of the fleshy grasping 'mitt', and inside the bones of the individual digits are still separate as well. These grasping feet of chameleons make them excellent climbers. Furcifer chameleons also have prehensile tails which they can curl around twigs and branches to give them extra support. Almost all chameleons have these prehensile tails, except for a few species such as the genera Brookesia, Rampholeon andRieppeleon.


The panther chameleon is, in other respects, very similar to the flap-necked chameleon, Chamaeleo dilepis, which I discuss in my article here . I discuss there the general adaptations that chameleons have, which aside from the feet and tail are their swivel-eyes, projectile tongues and colour-changing abilities.


So while the panther chameleon is in many respects a typical species, it is outstanding in the boldness of its colour patterns. The name 'panther' (and the scientific name pardalis, meaning a spotted cat) refers to the spots, blotches and stripes it has on its body. As it can change colour these are not always equally evident. Also, there are different colour forms from different parts of its range. This I need to explain: although chameleons can change their colours and patterns, there is a 'default' coloration and patterning that is usually to be found for every species and also for 'races' or geographic forms of the species. The panther chameleon has forms in which the males can be predominantly green, blue, orange or red. Whatever the ground colour, there are usually darker patches forming the characteristic blotches or bands. The females are typically much duller, brownish, greyish or greenish in base colour with a few more brightly tinted bits. Females turn a bit more vivid when ready to breed or when carrying eggs. Here you can see a few males as well as female colour forms.

Again I want to say that chameleons do not primarily change colour to blend into their environments. Many species blend into their environments by their default greenish or brownish colours, while several have skin textures that make them look like leaves, bark or moss. But the ability to change their colours from this default setting is usually not to make them blend in but the opposite, to make them stand out. They use it as a form of display. In the panther chameleon the colour display is among the most spectacular. The males, being the more colourful, are also the ones who engage in the most striking colour displays. They are strongly territorial. When two males meet and vie for a particular bit of territory, they will puff their bodies up with air, and turn as vivid as possible. Then you will see them display bright reds, oranges, blues and purples, that most definitely qualify as the opposite of camouflage. They open their mouths and extend the crests they have on their throats; they may hiss at each other as well. In these displays, the bigger and brighter of the two usually succeeds in intimidating the other one to back down; it will then in a display of submissiveness go drab and dark, and slowly inch backwards and away or drop below the twig of contention. But if it does not back off, the display might turn into a fight. Chameleons have powerful jaws and can inflict painful bites. Fighting is costly for both of them; it is therefore in both their interests to try and settle on a victor just by means of a display. And indeed, brighter colours usually go together with a larger, stronger body and more vigorous genes.


It stands to reason that the male will then also use his colours to try and impress females. In parts of Madagascar receiving seasonal weather, breeding happens mainly in Spring and Summer, while in the parts that are moist and tropical breeding can be year-round. Males establish their territories, using the displays mentioned above, and court females entering these territories. The females themselves also indicate by turning somewhat brighter that they are receptive. The male will then flash his bright colours at her and also nod his head. If she is impressed, they will mate. After mating the female assumes a particular dark and bold coloration that indicates to other males that she isn't interested. If they keep pushing their luck she will try and repel them by opening her mouth, hissing and swaying from side to side.


The female carries the eggs for about three weeks and then descends to the forest floor where she digs a burrow and lays her eggs, typically about 16 to 24, in it and covers them up again. The eggs take from six months to a full year to hatch. The tiny but perfectly formed babies claw their way to the surface and immediately know how to take care of themselves. They need to avoid predators, including other chameleons and even members of their own species! They mature in about seven months and can live for three years in the wild.


While the boldest and brightest patterns are saved for territorial and courtship displays, panther chameleons also change colour in response to environmental temperature, their moods, and the time of day.


The genus the panther chameleon belongs to, Furcifer, is confined to Madagascar and the nearby Comoro islands, although the panther chameleon has also been introduced to Mauritius and Réunion, islands lying far to the east of Madagascar. Furcifer comprises about twenty known species. Amongst them is one of the largest of all the chameleons, the Malagasy Giant Chameleon, Furcifer oustaleti. Many other species are quite small. Madagascar has an incredible diversity of chameleons, and about half of the world's total number of species. Panther chameleons are found in the north of the island, and have proven to adapt well to the clearing of forests, being able to live in more open parkland or scrub. They are therefore currently not considered endangered.


Some people keep panther chameleons as pets. I am not much in favour of this practice. It is true that these chameleons, like many reptiles, don't need much to thrive, but they do require their environments to be kept fairly close to what they experience in nature. Also, many wild animals are captured for the pet trade, eroding the natural populations. While panther chameleons are still abundant, a craze for chameleons ends up endangering their rarer relatives. Finally like all wild animals they are suited to their environments and best appreciated in those environments!