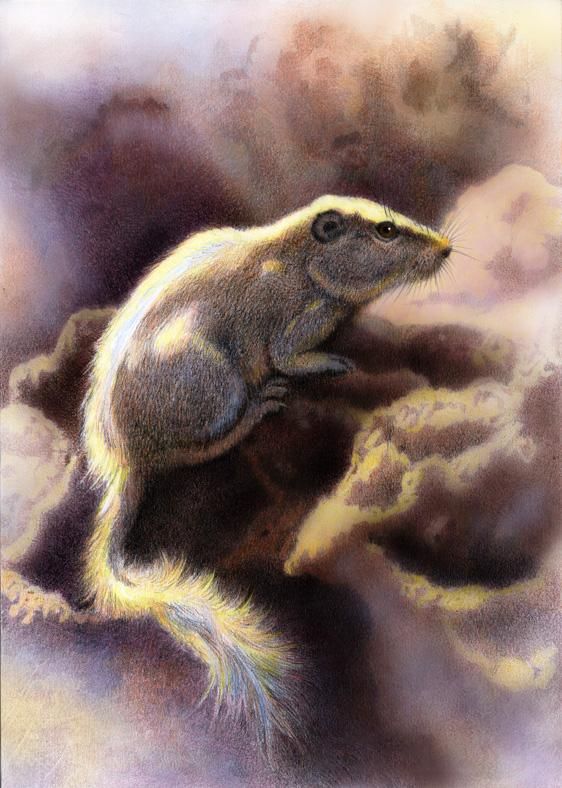 Neither Dassie nor Rat

The critter I have for you today is the Dassie Rat, Petromus typicus. First of all it is not a Dassie (the Afrikaans name for hyraxes. But neither is it a rat! In fact it is a very unique kind of rodent that is given its own entire family, the Petromuridae. Hyraxes are not rodents at all, being more closely related to Elephants, and a few other groups. The name 'Dassie', given to Hyraxes, means 'little badger' in Dutch … and hyraxes are of course nowhere near badgers either! Badgers belong to the carnivore order. This species is sometimes called Noki, although I haven't heard the name used much.


A Rodent of Rocky Desert

If you see a dassie rat you might, if you didn't know better, think it was a squirrel. It has a similar tail, though it is covered in wispy hair rather than bushy fur. But in South Africa that is no help, since the local bush squirrels also have very wispy tails. So the next clue is that you'll see the dassie rat more on the ground rather than in trees. But this is not much of a clue either, since in South Africa we have ground squirrels as well, and even the bush squirrels come down to the ground often. And just to be funny dassie rats will sometimes climb trees; the first ones I saw were climbing rocks and trees with equal skill. So finally you will just have to look at this critter closely and see that it has a quite un-squirrel-like body and head shape and posture. Especially its long, flat head is very unlike those of squirrels. If you know about this species and you are visiting the regions where it occurs – the dry and rocky semi-desert regions from northwest South Africa through Namibia and into southwest Angola – and got a really good look at it, then you would not mistake it for anything else.


These rodents today survive in these harsh regions where they don't face competition from many other species. Adaptations they have include their flat skulls as well as very flexible ribs, backbones and limbs. This allows them to squeeze into surprisingly narrow cracks between rocks, to escape from predators. They also have pads on the soles of their feet to help them grip onto rocky surfaces. They are always found on or close to rocks. The genus name Petromus means 'rock mouse'. They are rather bigger than mice, though, reaching a bit over 30 cm/12” in length, and a body weight of 260 grams/about 9 ounces. They are smaller than hyraxes, which occur in the same region and habitat, and therefore can exploit smaller rock crevices and do not compete with them. They live singly, in pairs, or in small family groups, and don't move around much, staying in patches of suitable habitat.


I saw dassie rats when I was hiking in the Fish River Canyon in Namibia. They were quite relaxed looking, although I couldn't approach them very closely. It's strange that they seem so happy in such a harsh environment. For them actually it is not so harsh. They can stay cool in deep crevices on the most sweltering of desert days, and on cold days they can come out and bask in the sun, stretched out on the rocks. They don't need access to drinking water, getting all the moisture they need from grass and the leaves of other plants. Around the bases of the hills and in the shelter between huge rocks the plants grow much more luxuriantly than in the surrounding open desert. They also eat flowers such as the many species of the daisy family that also grow here. Like many antelopes and other horned mammals, they will regurgitate food after first rapidly gathering and swallowing it, so that they can give it a thorough re-chewing. And like rabbits they also re-eat their own feces to extract more nutrition from them. These stragies allow them to really make the most of the sparse resources of the deserts. They have a habit of urinating and in a specific place called a latrine, permanently staining the rocks white.


They are playful and will run, jump and frolic around the rocks and shrubs when feeling safe. Usually at least one will be on the alert for predators, choosing a prominent spot with a wide view. When a predator is spotted, the lookout will give an alarm whistle and everyone will dart for the nearest crevice. Dassie rats will also flee in response to the alarm calls of hyraxes. Although they can be quick and active they rest a lot as well, and have an overall low metabolic rate. An unusual habit that has been observed is the 'tail stand'. The dassie rat will rest on its forelimbs and prop up its rear end with its tail, freeing the rear limbs so that it can scratch with them at its belly. This might have something to do with stimulating the belly or the bowels.


Unlike many other rodents this species breeds slowly. This is necessary in regions where there is not much food for growing children. For dassie rats the breeding season is in Spring and early Summer. One or two babies are born, at an advanced level of development; they start eating solid food at two weeks and wean at three.


The Last of Many

It is the only surviving member of its family, which dates back to between twenty and thirty million years ago. At a time there were many different species in this family; today it is the only one left. Its closest relatives are the cane rats and African mole rats, a small and rather weird group. More distant relatives are porcupines, Capybaras, chinchillas, guinea pigs and a host of other South American rodents. This indicates that the group of rodents to which the Dassie Rat belongs is an ancient one. The rodents of South America probably arrived from Africa some time after the continents had separated, perhaps by 'rafting' – clinging on to branches or tree trunks that had been swept into the ocean and surviving the voyage, establishing themselves on the new land and managing to survive and reproduce. Most rodents today belong to more recently evolved groups like squirrels, rats and mice.


These unique rodents can be considered fairly safe right now. The desert regions where they live are only sparsely inhabited by humans. They cause no nuisance to people and are not hunted or persecuted. They occur in several nature reserves such as the Augrabies Falls national park of South Africa, the Namib Naukluft national park of Namibia, and many others.