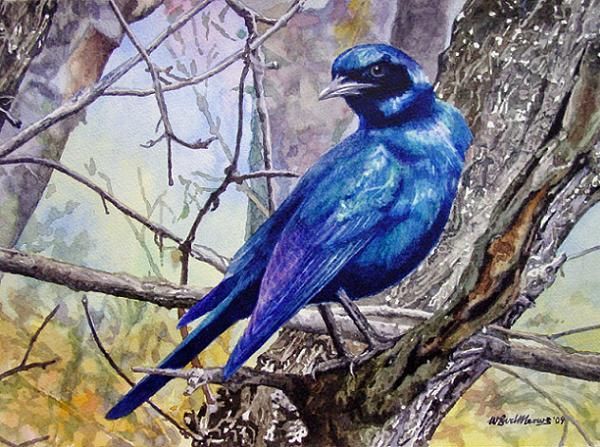 Today's article is about another beautiful bird species! Burchell's Glossy Starling, Lamprotornis australis, is the largest of Africa's glossy starling species, being from 32 to 34 cm (about 12.5”-13.5”) in length. It is found here in South Africa and also our neighbor countries of Botswana and Namibia, and only just entering the south of Angola and Zambia. It lives in savannah or woodland including the Kalahari Desert which is not a real desert but a dry savannah on deep sand which therefore has almost no accessible surface water.


Glossy starlings are of course first and foremost remarkable for being glossy! Their wing, back and head feathers are iridescent and reflect different colours from light striking them at different angles. This iridescence happens because there are hollow melanin (a kind of black pigment) granules arranged in a single, very thin layer at the surface of the barbules (the tiniest structures making up the feathers) and these scatter incoming rays of light in this characteristic manner, producing shimmering blue, green and purple hues. But in dim light all these starlings look black!


The genus Lamprotornis is related to other starlings such as the European Starling, Sturnus vulgaris, but is found only in sub-Saharan Africa. Africa is rich in starling diversity and contains several other genera, but Lamprotornis is the largest, with twenty or so recognized species, and a few which might or might not belong in it. They range from the 16 cm (just over 6”) Shelley's Starling to the 36 cm (just over 14”) Meve's Starling (which is smaller in body than Burchell's but has a longer tail). While all of them have glossy upperparts, they have mostly non-irridescent underparts varying from uniform blackish, blue, green or purplish, to bright orange in the Superb Starling, Lamprotornis superbus, which is frequently encountered by tourists in Kenya and Tanzania. That species doesn't occur over here; instead, the ones most frequently encountered in our local game reserves are the Cape Glossy Starling, Lamprotornis nitens, the Greater Blue-eared Glossy Starling, Lamprotornis chalybaeus, and this one. The previous two become extremely bold; in the Kruger National Park they will come and sit right on your table while you're having a meal in one of the rest camps to beg for scraps! This of course gives you a wonderful opportunity for admiring their splendid feathers.


Burchell's Starling is however a bit less abundant than the other two. It also is not very widespread, living only in the northern and northwestern parts of South Africa. It is very easy to recognize: apart from its size, about that of a city pigeon, it is the only glossy starling in South Africa, apart from Meve's Starling which has a much longer tail, that has an all-black eye. (The others have orange, yellow or reddish eyes.) It's gloss is overall greenish blue and it has fine barring on its tail. It is noisy, advertising itself by its churring call. Perched up on the tip of a branch of a scraggly tree, or strutting about in an area of short, yellow grass, it is usually quite conspicuous.


These starlings prefer such areas: tall trees to perch in surrounded by areas of short grass in which they can hunt. They are, like most starlings, omnivores and will methodically hunt for insects but also take advantage of berries and fruit they find on the trees and shrubs along the way. They are often associated with large grazing mammals such as zebras or wildebeests, or, in more populated regions, herds of cattle, which keep the grass short. These mammals also often flush insects from the grass with their movements, which the starlings then grab.


European starlings are well known for aggregating in immense flocks. This starling, like most African starlings, is far less social. Most of the time they occur as pairs, but often such pairs will live in close proximity with other pairs. Outside the breeding season they will sometimes form flocks of up to 50 or so members. The breeding season starts with the Spring rains, continuing throughout the Summer. These starlings use holes in trees for their nests, sometimes using ones abandoned by woodpeckers. A breeding pair will find a hole of a suitable size and then build a small cup-nest of dry grass in it. They lay three or four eggs, blue in colour, sometimes with light brown specks. The male and female both incubate the eggs and feed the chicks. When the chicks fledge, they start out as much duller versions of their parents, acquiring the glossy plumage as they become sexually mature.


The Sturnidae or starling family as a whole is large and diverse, with species naturally occurring in Africa, Europe, Asia and Australia. The European Starling was introduced by humans to America where it has become abundant. But the new-world mockingbirds, catbirds and thrashers of the Mimidae seem to be their closest relatives. They are also related to thrushes, flycatchers and chats. Their origin seems to have been in Asia, with them entering Africa and diversifying (quite spectacularly so) at a more recent date. At present about 50 species, which is almost half of the entire family, occur in Africa.