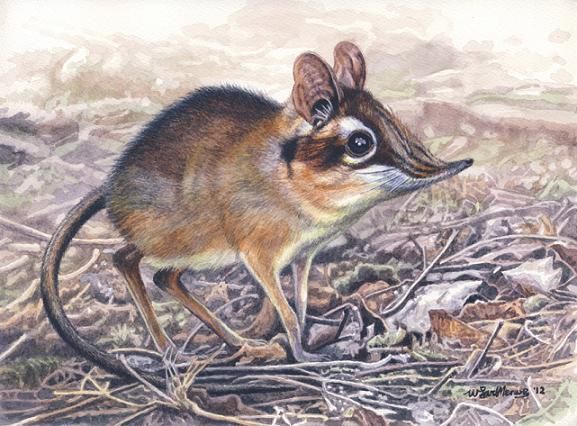 Today’s picture is of a Four-toed Elephant Shrew, Petrodromus tetradactylus This little crittur looks like a mouse or rat, but it is actually something completely different! Elephant Shrews are a uniquely African group. The name refers to the long flexible nose that all of them have, reminiscent of an Elephant’s trunk. The ‘shrew’ part refers to them looking very much like shrews, small mouse-like insectivores that occur almost worldwide. But recent evidence indicates that elephant shrews are indeed more closely related to elephants than to shrews! Maybe we should call them shrew elephants? Naturalist Jonathan Kingdon suggests that we call them Sengis, from a local African name for them. This seems to be slowly catching on.


This highlights just how incredibly the forces of genetic variation coupled with natural selection can modify the forms of animals. Elephant shrews probably shared an ancestor with elephants over fifty million years ago. Other groups that are also related to them are the Hyraxes, Aardvarks, Sirenians (I’ll get to them), and other small insect-eaters like Golden Moles and Tenrecs. Today this group is called the Afrotheria, beasts from Africa, because most of them are large and at present restricted to Africa. Elephants of course made it to other continents, and the Sirenians live in the oceans and great tropical rivers, but the others today occur only in Africa and its large neighbor island, Madagascar.


The Afrotherians are considered to be one of the major groupings into which modern placental mammals can be divided. The group probably already started diversifying before the extinction of the dinosaurs. At that stage, pretty much all mammals were small and rat-like. The elephant shrews in this sense can be considered fairly conservative in overall build and lifestyle, but they do have some interesting adaptations. Early elephant shrews were similar to ancient hyraxes, and others resembled rodents.


Four-toed elephant shrews live in wooded or forested areas with thick leaf litter, and scrape with their hind feet to uncover their prey. The long, thin snout is constantly twitching and very sensitive. Finding their prey by smell, the elephant shrews will flick out their long tongues and ‘lick’ the items into their mouths. They eat mainly ants and termites, but also crickets, grasshoppers and other small invertebrates. They bite these into fine bits with their high-crowned cheek teeth, a somewhat awkward method similar to that of hyraxes.


Apart from its nose the four-toed elephant shrew also has large eyes and ears, and presumably these senses are well-developed also. Their legs are proportionately very long and slender, especially the hind legs. They can use these to bound away from predators very quickly, like rabbits. The hind legs are even used to drum on the ground like the rabbit Thumper from the Bambi movie! This advertises by sound that a territory is occupied; if a neighbor hears it, he will reply by drumming his feet to signify that he, too, is in his territory. Drumming may also function as an alarm call. The territory is also scent-marked. There is a scent gland on the underside of its tail, and some populations have long, knob-tipped bristles beneath the tail as well which presumably help to disperse the scent and mark the trails wherever they go. This species sticks to a network of trails that it maps out in its territory, and it hardly ever departs from these. In fact it travels these trails so consistently that there will be open patches along it spaced at regular intervals of around 70 cm/28”. These mark the places where it comes down after each bound and starts the next one! But if not in a hurry it will walk and leave a narrower trail. It will have a map in its head of all its trails and the various hiding places along them. These are natural hollows under tree roots, hollow logs, cavities in termite hills, tangles of vegetation or piles of leaves and other littler big enough to shelter in. It will use a similar hideout as a sleeping place. If threatened by a predator it might squeal shrilly, but when it is content it will softly growl or purr.


These elephant shrews, living in warm regions with abundant rain, can breed at any time of the year. There is some competition between males for females, the fighting behavior involving them boxing each other with the forelegs while balancing on the hind limbs. But if a female has chosen a male, the two of them remain together for life. There is usually just a single baby born, fully furred and with open eyes, being almost independent and maturing very rapidly. The male doesn’t help her to raise them, but they are weaned at an age of 15 to 25 days, and mature at 50 days. Not much else is known about the reproductive behaviour of this species.


Today about seventeen species of elephant shrew are known, but surprising discoveries continue. A new species of giant elephant shrew (actually not that gigantic, about the size of a guinea pig) was recently discovered in Tanzania. This was indeed a major discovery, since prior to that only three giant elephant shrews were known, constituting a separate subfamily. The new species, the Grey-faced Sengi, is in fact the largest known member of the family. The four-toed elephant shrew is intermediate in size between the giant elephant shrews and the others, reaching a total length of 35 cm/14” and a weight of 280 g, about ten ounces (the females being significantly bigger than the males). It is also the most brightly coloured of the smaller species, with a conspicuous white ring around its eyes. It is the only species in its genus, Petrodromus, which means rock runner. The species name, tetradactylus, means having four digits, and refers to its four-toed feet. It lacks big toes.


In South Africa this is a rare species, only recorded from the moist, warm, northeastern parts of the country. I haven’t seen it yet, though I’ve seen some of its relatives. Outside of South Africa it occurs to the north into Tanzania, Kenya and the Democratic Republic of the Congo. Overall it cannot be considered threatened at the moment. Elephant shrews can live for four years in the wild, but are very rare in captivity and difficult to keep and breed.