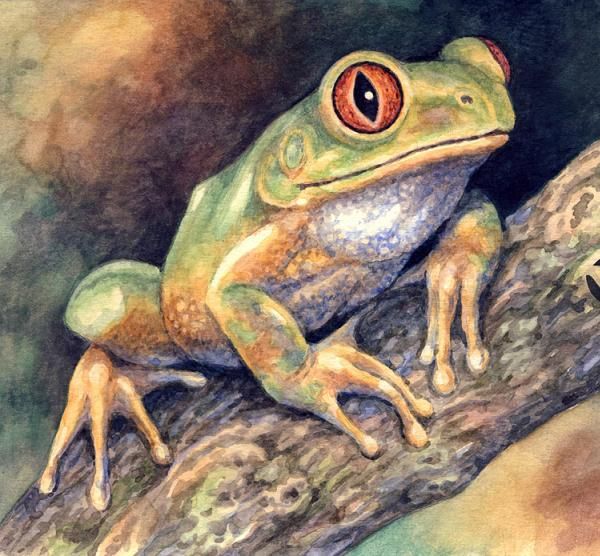 This is a watercolour paining of a Forest Tree Frog, Leptopelis natalensis. In spite of being given such a general name, this is only one of a great many tree frog species that live all over the world. In South Africa, however, this is the only tree frog that lives in forests. We have a few more tree frog species, but those live in savannahs and open woodlands, and sometimes even in treeless grassland.


Also, this tree frog is not found in all or even most forests in South Africa. It is confined to forests not far from the ocean, and only along a strip of coastline stretching from the northernmost Eastern Cape through to central Kwazulu–Natal. Historically, the coastline was well vegetated. The land ascends steeply from the sea, with high vegetation–stabilized sand dunes along the coastline, giving way to rolling hills inland. On the seaward side the dunes are covered first with pioneer vegetation – mostly sea tackies, morning glories, sea pumpkins (actually a kind of daisy) and in the mouths of the rivers, mangrove trees. This quickly gives way to tough dune bush – a low but very dense vegetation with a canopy of hard leaves resistant to salt spray, with plants such as the dune aloe, white milkwood, and more species of daisy. Deeper inland yet, the dunes are covered by a low forest interspersed with grassland, and here the vegetation gets particularly rich in species. In the sheltered lees of tall dunes, and along rivers and in the gorges they carve through the hilly landscape, tall trees grow. The forest tree frog lives in all these types of forest, from the low coastal bush to the tall river and gorge forest. But nowhere does it penetrate very deeply inland.


Unfortunately this forest is currently very badly threatened. Since the nineteenth century the hills along the coast have been largely stripped of their original vegetation, the forest and grassland replaced by sugarcane plantations, or plantations of alien pine trees. But an even more insidious threat that is becoming worse and worse today is people who want to live by the sea. There is so much property development on South Africa’s coast. There are some laws against destroying the vegetation but this seems to only apply to the plants pioneering the dunes, the more deeply inland dune bush and grassland often being completely destroyed. And then of course there are the throngs of people that want to spend their holidays on the beach. So, it is almost impossible today to find any significant stretch of pristine coastal vegetation. This is a tragic loss not just in terms of plant and animal diversity, but also in the unspoilt beauty and character of the coastline. There is something truly magical about walking along a pristine Natal beach, alone … the sands pure white, with beautiful sea shells (not to mention the living critters scurrying around the beach and populating the rock pools), and on the dunes, the beautiful blooming beach morning glories, the aloes, the beach daisies, and beyond them the wonderful wild bananas, the fan palms and the wild date palms … when you walk on you get to a river flowing into the sea, and there grow the tangles of beach hibiscus with their big yellow flowers, and mangrove saplings growing in the water itself even into the brackish water where the river starts mingling with the ocean. Inland along the riverbanks you see beautiful tall trees, and if you stand still a moment you will hear the calls many different kinds of birds, monkeys, and of course frogs. Enter the forest, and you’ll be greeted by the most beautiful butterflies you’ve ever seen, and if you pay attention you’ll see many more insects, other invertebrates, birds, and other animals. And most of all you’ll experience a kind of peaceful solitude – while being at one with the surrounding bustle of wild nature – that in today’s world is truly rare and precious.


I was lucky to encounter these forest tree frogs on a trip to just such a pristine section along the Natal Coast. This was in the late eighties at a school camp. While as usual in South Africa of those times they did a lot to torture us kids during this camp, they also gave us opportunities to explore and see things. I appreciated that enormously. One such experience was finding one of these frogs in our sleeping halls. It was a tiny thing, just a couple of inches long. I recognized it, and took it on my hand. There it clung on with its little sticky toes. It clambered on my hand for a while, its cold little ‘fingers’ being a very strange sensation, and then it leaped from my hand to the wall, and stuck right there! I took it out, not wanting the other boys to perhaps harm it. But it was a lovely little thing.


These tree frogs are generally green, but can be brownish (the juveniles, mainly) or even pale creamy. They are usually paler below, sometimes with a yellow or orange tint. Their eyes are big and bright red or orange. Their toes as well as ‘fingers’ are expanded into flat disks that ‘stick’ due probably to the special kind of slime covering them as well as a vacuum–effect. These enable them to climb very well. The tree frogs look like they’re always smiling, with their big, broad mouths. They call from trees and shrubs in the forest, a loud quack being the mating call. If a male should impinge on another’s territory, the holder will warn him with a soft buzzing first, but if that doesn’t work, will wrestle with him. He might manage to win and drive the intruder away, or the intruder might succeed in displacing him. If the winner manages to attract a female, they will go down to the forest floor. She will deposit her eggs on the bank of a stream and the male will fertilize them. The long, eel–like tadpoles will hatch on the moist stream bank, and slither from there into the water where they will complete their development and metamorphosize into little tree frogs.


Tree frogs, as I’ve indicated, are very agile. They climb and leap around in the trees catching and eating a variety of insects like moths with which the forests are filled. In addition to their clingy toes and flexible, long limbs, they have flexible necks, unlike many other frogs, and can turn or flex their heads to get a better look at their prey or surroundings. This gives them an inquisitive and endearing air.


The Leptopelis tree frogs seem to be not closely related to other tree frogs of the world, instead belonging to a group of mostly terrestrial frogs, which includes the very strange Hairy Frog, Trichobatrachus robustus. The genus Leptopelis is a large one, including about fifty known species of forest tree frog living mostly in tropical Africa. They are very variable and lovely frogs, many having beautifully patterned skins. They have not yet been very well studied, and there might be more species awaiting discovery. In Southern Africa the genus is unusual in having produced three species that don’t live in forests: one is a ground–living, digging species, another lives in savannah, and another lives in open grassland. I hope to soon paint and discuss each of those!