The Prof is at it again. Try his new challenge. 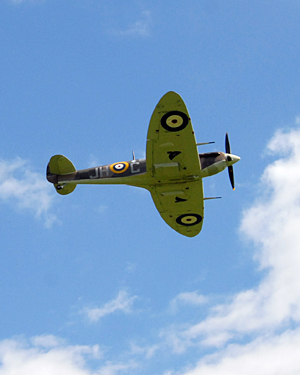 On a pleasant summer's day, rarely seen of late, a lone figure watches away into the distance with expectation as a powerful motorbike came roaring towards him. Now two men greeted each other with gusto, as it had been one year to the day that they had met here at this point – The Reunion!

Within the next hour, three more gentlemen arrived by various forms of transportation and after the pleasantries, continued to one of the derelict out buildings carrying assorted objects.

This place of meeting was an old abandoned airfield, last in use and operation during the Second World War, now a past memory in the minds of fewer and fewer personnel as time takes its toll.

After a few minutes, a camping table and chairs are set up and an old wicker food hamper is opened, the first thing to appear is 5 glasses and a bottle of champagne. A toast is taken by five young men in their early 20's to fallen comrades and long may they be remembered.

Now the conversation turns to how things have gone throughout the year with each one, this passes fairly rapidly as it is time to reminisce about the days of sirens going off and pilots scrambling to aircraft, onwards to dogfights over the countryside against an enemy invader to our shores. Three Spitfire and two Hurricane pilots discuss the events and tactics they deployed numerous times when scrambled towards the coast, to attack bombers, fighter formations heading inland to conduct they're missions.

At this point! You'll be wondering why five 20 year olds reminisce about bygone days, the reason is that: They have been genetically enhanced and this event took place just before World War 2 broke out. They were an experiment in genetics to see if superior armed forces personnel could be "manufactured" for the obvious advantages in all forms of combat. Also within their genetic makeup, is that they only age approximately 1 day for every year, which explains 20 years of age 60 something years after the war ended.

Each year they are drawn back to the airfield by what could be called an invisible magnet. They have knowledge of "who" they are and why they "came" into existence, as because many good pilots were losing their lives defending the nation and newer younger pilots were heading to the skies with little airtime against a greater air force in numbers and skills, but not HOW they came into existence.

But! This year appeared to be different to them as the "magnetic urge" seemed to draw them here stronger for some unknown reason.

As they never really surveyed the airfield because as over the years it fell in to decline and they will always remember how it used to look in its glory days, they decided to wander about this time and see if anything sort of turned up to explain their feelings.

Still reminiscing as they walked, in a far corner away from the main parts of the airbase they came across a small brick building no bigger than a shed, with no windows and a door bricked up. Thinking initially that it could have been part of the armoury of the times, they concluded that this needed further investigation, so tools were brought from one of the cars that 3 had arrived in and they commenced to make a way in.

Once inside, they saw it was totally empty, except for a wall safe to the left of them and above it was a number and letter 5L. Plus their heightened senses told them that they were getting close to answers. It was time to have a meal and to ponder over 5L and an unknown safe combination.

Working on the premise that the 5 meant them and the letter could mean left, gave them two choices, five of them left and had there been more of them? Or five left was the first of the combination? Stood discussing, one of the group enquired why were 3 of us in a Spitfire Squadron and the other 2 in a Hurricane one, rather than all being in the same squadron? As you never questioned orders and did your duty.

So 5-3-2 came into the equation and after some deliberations, the year that these feelings came to a head as in now! And thus gave them the last 2 numbers for a first time of trying combination, Amazed! It worked, suddenly the inside of the building shook slightly and gave rise to them that it was a lift starting on a downward journey. Having nothing on the walls to show a floor count, they went down for what felt like ages until a shudder told them they'd reached their destination.

Opening the door, they were surprised to see a well lit corridor with a few doors along each side, so slowly walking down it and noticing door numbers and titles i.e. C4 Bloods, D2 Tissues, but ultimately aiming for the door at the far end which just read Birthing. Could this be where THEY were originated from? Once at the door, they halted for a moment, in apprehension of what they might find on the other side. One said, "Well! In for a penny, in for a pound, chaps," opened the door and stepped through. His gasp caused the others to rush in, nearly bowling each other over in their hurry.

What they saw, apart from the many tables, electrical units of sorts and assorted laboratory equipment as such about the place, made them just stand there transfixed trying to make heads or tails of a sight beyond anything imaginable that could have existed in the 1930's and 40's.

Leading their eyes to gaze over at a glass coffin, or at least as one of them coughed out the words that it looked like one.

On closer inspection, indeed it did have the appearance of a coffin and not only that BUT! It also had a body in it, which looked like a small boy at whom they guessed looked about 5 years old.

On a nearby table, were piles of ledgers, including five that were apart from the rest, each had the name of one of the group embossed on the front; this was going to take time to read and digest. And they had plenty of that on their hands.

NOW! This is where my part of the story stops

BECAUSE if you've read this story to here, then your own imagination will be working on "what happens next"???

AND that's where you come in, there must be many alternatives to what could follow on with the story, so why not write YOUR alternative and submit it to the POST!

The more endings the better eh!