Break out your phrasebooks, you monolingual people. It's the time of year again when we celebrate all things Spanish. Maria is our guide to the life and Works of the great Federico García Lorca. 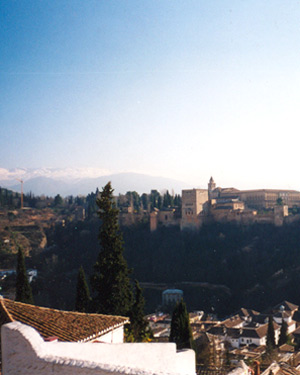 The 23rd of June is the Day of the Spanish language, according to the Instituto Cervantes. Last year, we talked about its worldwide importance. In this occasion we are celebrating the birthday of Federico García Lorca, best known as Lorca. (5 June 1898 – 19 August 1936) .

This poet and playwright is one of the most internationally known Spanish artists, not only for his tragic death during the Spanish Civil War, but also because of the great importance his work has. Lorca takes from and recreates the rich Spanish literary tradition and, influenced by the Vanguardist movements, mainly Surrealism, writes avant garde drama and poetry.

He was also a committed person with his society. He firmly believes in the emancipating power of education and art. He writes about the role of the threatre, his vocation during the last years of his short life: "The theatre is a school of crying and laughter and a free platform where men can bring under the spotlight old or wrong morals and explain with living examples eternal norms of the heart and the feelings of humankind".

He put into practice those words and created the social and artistic project La Barraca. A group of actors, friends and different artists travelled around Spanish villages to take the theatre to ordinary people, most of them illiterate. It was a great success. The war put an end to that project as it happened with another ones like the Pedagogic Missions, started by the Republican goverment of the epoch, conviced that education was the key to help Spain develop.

Europe was experiencing the consequences of the Great Depression. The political instability was extreme. In 1933 the Nazi party accessed to power in Germany. In 1939, the Second World War started. That same year the Spanish Civil War finished.
Before that, The Republic was proclaimed in Spain in 1931. It was popular among ordinary citizens, but the reforms found the oposition of terratenientes, (owners of great extensions of land), the hierachy of the Church and the Army. In 1936, the military coup d'etat culminated in a long and bloody civil war that ended in 1939 with the defeat of the Republican army and the victory of the troops led by Franco. He set a fierce dictatorship that ended in 1975.

Lorca was executed in the summer of 1936, in the ravine between Alfacar and Víznar, two villages of Granada, his hometown.

Million of words have been written about this great artist. Ian Gibson, an Irish Hispanist, is the most known writer devoted to Lorca's work. Our aim here is to honour Lorca so we will only give some strokes of his vast and interesting literary creation.

Lorca moved from Granada to Madrid in 1919 and lived in a boarding house, La Residencia de Estudiantes, where the cream of the Spanish arts and science was studying. There he met Dalí and Luis Buñuel, who introduced him to Surrealism.

The main topics of his poetry and drama are the frustration of love, tragic destiny, rebelliousness, the exaltation of the passions and the denunciation of injustice and dehumanization. Real life events gave him much of his inspiration.

Some of his most known books of poems are the Romancero Gitano and Poeta en Nueva York.

In the Romancero Gitano, the reader finds traditional educated poetry, vanguardist audacy and popular rhythms to express a vision of the world where the life of people is affected by tragic destiny.

He wrote Poeta en Nueva York after travelling to that city (1929-1930). He was shocked by a capitalist society where everything is subordinated to money. With a dense symbolic language, Lorca not only criticized racism, exploitation or lack of compassion, he also expressed his own personal conflicts: his affective rootlessness, the lost of identity, the free expression of his homosexual love...

His drama is somehow a prolongation of his poetry: the same topics, the same mix of tragic sense and lyricism and the same influences.
He wrote colourful and poetic puppet shows, Los títeres de cachiporra. Farces, dramatic verse...

El Público and Así que pasen cinco años are pieces of vanguardist drama. They couldn't be put in scene until recently because of the technical limitations of the epoch.

He's very much known by his realist drama: Bodas de Sangre, Yerma, Doña Rosita la soltera and La casa de Bernarda Alba. The power conflicts and the social margination of women in a closed patriarchal atmosphere are the main topics in those last works.

His poetry form parts of the current Spanish culture because singers, particularly, the flamenco ones, have used his poems as lyrics.