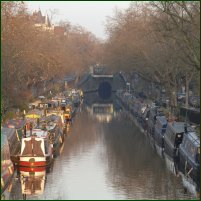 The weather here has been simply glorious. I had to spend the weekend out of doors. On Saturday, then, I walked into town, popped by the optician to ask whether I could drop in my old glasses (no, they're no longer collecting them), bought myself some sun cream, ate, and walked by a circuitous route back to the canal. My plan was to walk the canal line from Tullamore to Daingean. It's a long walk, largely through farmland and bog, which I've walked twice before.

Walking past the harbour, I saw a friend of mine climbing into a van on the other side. I waved, and he yelled to me to come over and talk to his friend who'd just moved into a narrowboat. By the time I'd got to the bridge and back, Cormack had gone, but I did have a brief chat with his friend on the boat. He'd moved in just the previous day, and was so far loving it. That narrowboat has been in the harbour for months being renovated. It was good to see it fully restored and kitted out.

Then I set off. It's uphill all the way to Daingean, with several locks. I was making good progress when I met a barge coming through a lock and stopped to help swing a lock gate. The helmsman invited me aboard to help with the next few locks. They were going the wrong way for my purposes, but never mind. I had no particular purpose in mind in Daingean anyway. It was just a good goal to pick for a long walk. So I stepped aboard.

C was bringing his boat from his home in Athy to Shannon Harbour to attend a barge rally in a few weeks' time. He was heading down early, partly because he'd be out of the country for the next couple of weekends, and partly because he wanted some work done on the boat in the dry docks at the harbour. He wanted to put a wheel into the wheelhouse, so the boat could be managed from inside instead of from a tiller out the back. D and his three small children were helping. Well, D, an engineer who'd be doing the work on the boat, was helping. And the kids didn't get in the way. It was a fun crowd, and I enjoyed myself. And I was helpful with the locks. I also shared my factor 30 with the kids.

Going through Tullamore on a boat gives you a different perspective on the town. I liked it.

Then we got stuck in a lock. The Irish canals are significantly wider than most British ones, and this barge was no narrowboat. It was almost maximum size for the waterways. It filled the locks. It overfilled the last lock in Tullamore. Stuck on the bottom half way through the lower gates. D leapt out and ran back to the top gate, where he opened all four racks. With that much water pushing down at us, the engine on full blast, and D and a passer-by hauling on a lock gate to force it fully open despite the rubbish caught behind it, we barely got out into the open canal.

Once we were out past the railway bridge and out of town, it was very slow going. The canal hasn't been dredged in years. A fully laden barge simply could not have made it through. We were barely clearing the bottom. The canal passes a couple of ruined castles on that side of Tullamore, and then passes over two aqueducts.

We got as far as Rahan, and moored by The Thatch, a famous pub in the area (it has a slate roof). I've walked to Rahan before. It's closer than Daingean. So we stopped at the pub and watched Eurovision while we waited for D's wife to collect him and the kids. Go Jedward!

Well, the kids were fans, anyway.

Fortunately, the pub was loud enough that we couldn't hear them very well, even if they did put the volume up slightly for their performance. Actually, it occurs to me that I shouldn't make rude remarks about Jedward, as I've never actually heard them sing. I couldn't hear Roman Lob from Germany either, but I still appreciated the performance.

D and the kids left (after many energetic rounds of thumb war and arm wrestling (and I'm now proud to report that I can beat a combined team of an eleven-year-old and a nine-year-old using two hands)), and I was left ready to walk home. D's wife had offered me a lift, but I said I'd come out for a walk that day anyway.

Then C offered a further trip. I could stay the night on the barge: there was plenty of room. And the next day I could help him to Shannon Harbour, where he'd left his car, and he could give me a lift home. It was a tempting offer. It was getting a little cold for walking home. He offered me a meal too. And it would be an adventure. If I turned it down, I'd regret it. So I stayed.

It may, at this point, be appropriate to describe the barge. The wheelhouse was unfinished: the inside walls were covered with insulation foam. The steps down lead into the spacious galley, which contained a gas fridge, cupboards and work counters, two sofas, a folding kitchen table, a coffee table, shelving, and pictures, with the walls and ceiling done in a pleasant tongue-and-groove. Forward there was a narrow corridor with a cabin to each side, followed by a shower room to starboard and a toilet to port, then the large (but low-ceilinged) bow cabin. Basically, it was a floating three-bedroom apartment. And with a larger kitchen/living area than many apartments. Beautifully done.

We ate, had a couple of glasses of wine, and retired. I woke early, but stayed in bed till I heard him moving about. We set off without much delay: a brief ham and cheese sandwich and cup of tea for breakfast, untie, and depart. This time, we had a lock-keeper on hand as we passed through the locks, which helped. They were ready for us as we came to them, and he managed the gates on one side while I did the others.

We stopped in Pullagh to take on water, and to have lunch (another sandwich, this time with coffee). It was weird seeing Pullagh in the blazing sunshine. I've always associated that village with persistent rain, perhaps because it's so exposed in the middle of the bog. No shelter at all. It's actually a pretty little place in good weather. Leaving Pullagh, the bank collapsed under me as I pushed off, and I landed in the canal up to my knees. Probably a good thing I was in bare feet.

For the last lock, Belmont, a double, we were on our own. So this was the first time I used a lock key. It was rather good fun. We had an audience, too, who helped with one of the gates. He'd have been a lot slower without me. With an assistant, he didn't need to tie the boat at all. The lock was ready for us, and as we pulled in I could easily jump off to close the gates behind us. And as we left the lower lock, I jumped down onto the wheelhouse roof.

The canal is remarkably windy in places. It's constantly curving down there. It's much straighter up near Tullamore, where I know it. There's also a lot of emptiness. The canal is cut through bog. Beautiful and bleak. Lots of broom and gorse.

The canal becomes very shallow just above Shannon Harbour, and we actually ran aground at one point. A bit of wiggling with the motor got us off in the end. I was trying to use the pole to shove us off, but there wasn't really anything to push against, as it's all soft clay.

We moored just above the lock into Shannon Harbour, and walked down to get the car.

A couple of friends of mine had a juggling/street performance show in a local talent competition. The final was on Sunday, and I'd intended to go to it, but we were just arriving in Shannon Harbour at the time.

C drove me home, and dropped me near my parents' house. They were away climbing Lug, but they'd left some quiche for me, so I popped in and ate the lot. I was hungry. Then I walked home, had a long shower (I'd been wearing the same clothes for two very hot days), and fell into bed.

It was almost a perfect weekend. My feet got sunburnt, which puts a bit of a dent into it.