Stop the presses! Tear out the Front Page! Er, no, don't damage the monitor screen, oh, you know what we mean. We have NEWS. 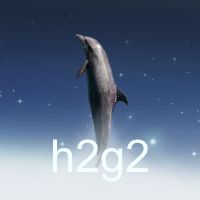 The Post: As the release of Pliny quickly approaches, the h2g2 community has questions, and our guest, h2g2 Digital Lead Pastey, has answers. Welcome, Pastey.

The Post: Pastey, we've been seeing a lot of posts about Pliny lately. Now, Nigel and I thought Pliny was one of two Roman citizens – either natural scientist Pliny the Elder, or statesman Pliny the Younger. But this Pliny seems to be some form of technology. Could you tell us a bit about Pliny the Technology and what it means for the Guide?

Pastey: Pliny, named for one of history's greatest scientists, is the next incarnation of the Guide, which is tentatively scheduled to be launched over the weekend of 5th and 6th May. For readers and most Researchers, Pliny will replace Ripley as the main way to use the Hitchhiker's Guide to the Galaxy, Earth Edition.

Ripley was state of the art in its day. It's a credit to Jim Lynn and to his colleagues that Ripley lasted as long and performed as well as it has. Ripley's memory management system was designed in an earlier Internet era when there were far fewer Internet users and a lot less content in the Guide.

Pliny is designed for today's Internet environment. It will form the foundation from which the Guide can be expanded and very soon become fully mobile, as Douglas Adams originally envisioned it.

The Post: What can Researchers do to get ready for the transition?

Pastey: Researchers won't have to do anything at all.

The Post: Could you tell us a bit about what's been happening with the Guide lately?

Pastey: Sure. The Hitchhiker's Guide to the Galaxy, Earth Edition is a lot of things to a lot of people, but to the server, which is a piece of hardware that serves up data in response to requests, it is a database, somewhat like a giant, growing warehouse filled with every version of entry ever written and every conversation that has taken place since h2g2 began in 1999. Whenever anyone contributes or updates research or takes part in a conversation, the database grows a bit bigger.

Twenty-four hours a day, tens of thousands of people from all over the world use various devices to surf over to the Guide. From the point of view of the server, each of those is a request for a page of data.

Basically, each time a page is requested, the server asks the database for parts of it, does some processing, gets it all together and sends it back. Doing all that every time takes a lot of server power, so the system saves a copy. The next time someone asks for a page, it sends that saved copy to them.

Because h2g2 is popular, a lot of entries are getting read every day. Copies of each are filling the disk space, which means that each time a page is requested the code has to remove an old cached entry to replace it with a new cached entry, and this brings the site to a halt.

We realized this last summer, before we took delivery of the database. And we had to make some hard choices. You see, at the time h2g2 went up for sale, the Guide was running on Forge. Forge is a version of the Zend Framework that is customized for the BBC. But Forge was not included in the sale of h2g2, so we needed to choose something else to run the Guide.

One option was Ripley, the version of DNA that powered the Guide up until the BBC's Forge upgrade. The Tech Team could get the Guide up and running on Ripley in a matter of days and not months. But if the Guide was as popular as we thought it might be, there were likely to be server crashes because of the caching problem I mentioned earlier.

The better choice for stability would have been to run the Guide using a vanilla Zend Framework. Zend offers stability for the kind of traffic we were expecting, but it would take months to get up and running. We simply couldn't do that to the h2g2 community of which we are all a part.

So we got the Guide up and running on the older Ripley skins and immediately went to work on Ripley's replacement. Brian picked the name and I only later found out it wasn't a beer by Russian River but was an old Roman chap. I didn't have a classical education.

The Post: There appear to be some similarities between Pliny and Barlesque. What gives?

Pastey: Researchers may recall that the announcement of h2g2's sale interrupted the implementation of Barlesque. Included in the sale of h2g2 were the artwork files for Barlesque, as well as those for brunel, alabaster and my personal favourite, classic goo.

So yes, Pliny shares some visual similarities with Barlesque. However, the very big differences under the bonnet are going to allow us to begin an era of Guide development and expansion that we all have longed for.

We removed the entire framework that runs the BBC systems, and replaced it with a vanilla installation of the Zend Framework. We've written some new hooks and libraries to replace those that didn't come with sale or were otherwise not suitable. We've built an all-new user login and authentication system. Plus, we've added some new features, including a WYSIWYG editor, accessibility, and some social media hooks.

The Post: Sounds intriguing. Tell us about these new features.

Even for tech savvy Researchers, a WYSIWYG editor makes it faster and easier to submit our research. After all, it's much easier to edit one's own writing and spot typos without all those GuideML tags in the way.

At the moment the WYSIWYG handles the basic HTML for you, you can just write content without having to worry about the layout code which we hope will encourage more people to write. Of course though, there's still the GuideML editor.

Better accessibility makes the Guide useful to more people. The Tech Team has been working closely with the Artists to improve Pliny's accessibility. In addition, the Artists have also worked on page lay-outs to make Pliny more usable.

The social media hooks puts buttons for Facebook, Twitter, and Google+ on every entry. With just a click, any Internet user can introduce their family, friends and associates to the distilled wisdom that is the Guide to Life, the Universe and Everything.

The Post: That's really exciting. Do you have anything else in store?

Pastey: Of course! We've already begun the next evolutionary step for the Guide, named Eddie, after the shipboard computer in the HHGG series, and from the tenuous acronym of Electronic Data Distribution and Integration Engine. Eddie will make the Guide fully mobile. Until we've built Eddie, though, we'll still be supporting both Pliny and the older Ripley skins. Nothing's going away, only being added to. You can still use your favourite Ripley skin for as long as you like, and the plan with Eddie is that these older skins will be ported over to the new framework. Pliny really allows us to have a hopefully much more stable site, while being able to quickly develop and try out new ideas to improve the Guide.

I'd like to thank everyone who worked so hard to support our efforts. A big 'thank you' to the volunteers who've done a lot of valuable bug hunting for us, and to Dr Donna Wrublewski and her students of the University of Florida for helping us with beta testing.

The Post: And a big 'thank you' to you, too, Pastey, for all the work you've done in opening up h2g2 to new readers and writers.