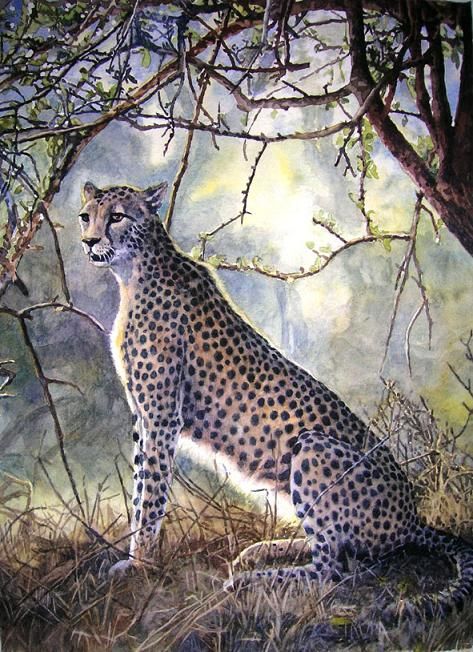 Today's picture is of a Cheetah, Acinonyx jubatus. Cheetahs can be distinguished from leopards by their different shape – much smaller head and longer legs; their simple round spots – not grouped into rosettes as in leopards; and the black 'tear lines' going down from their eyes to the corners of their mouths. This one is resting, but in action cheetahs are the fastest running mammals in the world. We still don't know exactly how fast they are, but studies indicate they can reach speeds of at least 100 km/h, 64 mph.

Almost everything about a cheetah is geared towards speed. It has long legs with feet that, unlike in all other cats, have non-retractable claws. These function rather like athletic cleats, improving traction. Its body is also very long, with a flexible spine that stretches and contracts while it runs to add to its stride length. Its rib cage is narrow but deep, housing huge lungs to supply it with oxygen. Its long tail acts as a counterbalance and helps it to execute tight turns at top speed. Its head is small compared to that of other cats; this saves on weight. Even the skull is designed for its lifestyle: it typically kills its prey by grabbing it by the throat and suffocating it. The jaws are short but very strong. Since it has to clamp tightly onto its prey's throat for up to 20 minutes, while being in extreme oxygen debt as a result of the furious chase, its problem is getting its breath back during this time. The solution is its unusually large nasal passages, allowing it to pant rapidly through its nose.

A cheetah's hunting technique is also all about speed. It typically hunts small, fast antelopes – in East Africa its favoured prey is the Tommie or Thompson's Gazelle; in South Africa it is Springboks, Impalas or Steenboks. Cheetahs will try and sneak up as close as they can, and then charge. The chase is short but brutal. A successful chase ends with the cheetah swatting its prey down to the ground with one of its front paws, and then grabbing it by the throat as described above. Only a small percentage of chases are actually successful. Many times the prey escapes because the cheetah can only maintain its speed for a few seconds. Running that fast is metabolically extremely costly; if a cheetah keeps running at top speed for too long, its body will overheat and it will suffer muscle damage and general systemic trauma that might very well kill it.

Another risk that cheetahs face even when their chase is successful and ends in a kill, is other predators coming along and robbing it of its meal. Cheetahs sacrifice strength for speed. Thus, should a lion, leopard, hyena or wild dog come across a cheetah with a fresh kill, it's in trouble. There's not much it can do against these bigger, stronger animals; it can growl, hiss and spit and make mock charges at them, but if they call its bluff, the cheetah will back off and allow them to enjoy the meal it had just obtained with so much effort. It will have to face the hazards of yet another hunt.

Bringing up baby cheetahs is very hard. Litters range from one to six cubs, and the mom cares for them on her own. Cheetah cubs look very different from adults. They have very long grayish-white fur forming 'manes' along their necks and backs, and dark bellies. The mother leaves them in a lair and returns to suckle them up to the age of 8 weeks; from then on, they accompany her and eat meat. She will teach them how to hunt by bringing live baby antelopes to them, which they will then chase around for a while before finally killing and eating them. When the cubs reach the age of eighteen. . . months, that is. . . they'll be ready for independence. The mom will just abandon them one day, all of a sudden, and leave them to face life on their own.

Mortality of baby cheetahs is staggeringly high. Part of this is because of the difficulties of hunting described above; but also, young cheetahs are very small and vulnerable, and everything from lions to secretary birds will prey on them. Open habitats, that afford good hunting conditions to the adults, leave the cubs very exposed to predators. On the Serengeti Plains, for instance, only one out of twenty cheetah cubs survive to the point of independence. In more diverse habitats, with large open expanses in which their mother can hunt as well as areas with scrub and bushes in which they can hide, cheetah cubs have a better chance.

Taking all of this into consideration, it is clear that cheetahs have a hard life. They need very special environments; they need specific species of prey. They will always play second fiddle to larger predators, and probably never were very abundant. And yet, they've done quite well, historically. Cheetahs used to occur widely in the more open regions of Africa, even in the Sahara Desert, and also occurred in the Middle East and as far as the plains of central Asia. Prehistorically, a large species of cheetah occurred in Asia and was a contemporary of early humans. . . it being speculated that it might even have preyed upon them. This giant cheetah might have differed in its lifestyle from the present species, though.

But at present, cheetahs are in grave peril. They have been almost completely exterminated from Asia, and in Africa they are rare outside large national parks. They have lost much of their range to agriculture and livestock farming, and are persecuted by humans. They're also hunted for furs, even though this is illegal in most African countries. But it seems that even before these present persecutions, cheetahs had suffered some form of calamity. Tests have shown them over their entire range, including Asia, to have extremely little genetic diversity. They are all quite closely related to each other. This may be because at some point in the past, perhaps about 10 000 years ago, they had been reduced to a very small and uniform population, and then increased and spread out again. This is called a 'genetic bottleneck'. Their close-relatedness makes them very vulnerable to inbreeding and to the effects of diseases. Thus it is imperative to preserve as much of their genetic diversity as possible.

Despite the lack of diversity at the gene level, cheetahs do display significant outward diversity, with individuals ranging from very pale and with sparse spotting (such as in desert cheetahs) to the very boldly and strikingly spotted and striped forms called 'King Cheetahs'. These were in the past considered to be a different species, Acinonyx rex. Today it is known that these are just regular cheetahs that have a coat pattern mutation caused by a recessive gene. Consequently, 'king' cheetahs can be born to normal parents, and vice versa. Other mutations include spotless cheetahs, or all-black ones, like black leopards or panthers. These are very rare though.

In some parts of Africa much is done to conserve cheetahs. There are numerous special breeding initiatives in South Africa such as at Ann Van Dyk/De Wildt Cheetah Centre. Cheetahs are sometimes tamed. They are not nearly as dangerous as other big cats such as leopards, lions or tigers. One day we (parents, sister, her husband and son, and I) were at a local hotel and restaurant, and on the grounds we met some young cheetahs being taken for a walk on leashes. They were very friendly and enjoyed us stroking them! It was a delightful experience.