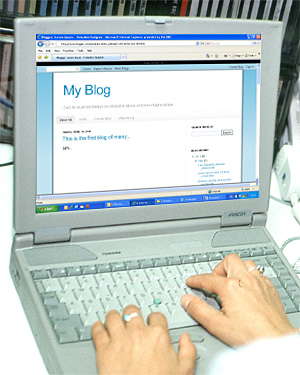 When the Profanity Filter went live on h2g2 in April, 2006, lots of researchers left the site in disgust and started a blog somewhere. Back then, I felt that my journal on h2g2 was all I needed; I didn't see the point of having a blog and I didn't bother. A good two years later, I explored the various features google offered, like 'Reader' and 'Blogger'. Before I knew, I had a blog. I experimented a little, wrote a few words, then forgot all about it for the next two years – until moderation on h2g2 became decidedly silly. This time, it was me who was disgruntled and set up a place where I could discuss Spotted Dick if I felt like it, or ear muffs for that matter, without being moderated for using perfectly fine words in a perfectly fine context.

I soon found that it was a lot of fun. Setting up the Blog page, choosing a template and fonts etc, was easy; Blogger is really intuitive. You don't have to read tutorials, you just click, preview, and when you're happy, you start to blog. I merrily blogged away adding the odd photo or even video in the process.

When the Editors announced the BBC's decision to sell h2g2 in January this year, I added various 'pages' to my blog, where I saved and hosted my published content from h2g2. After all, nobody knew back then if and how h2g2 would survive.

All the while, I explored more features google offered, the latest being 'google +'. It had a nice feel to it; easy and straightforward like all other google products I was using. And then came the bummer: more and more websites reported that users had lost everything they had hosted on google because they were using a nickname instead of their real name, resulting in google closing their accounts. Various people commented, saying it was a very stupid thing to host all your content on websites of a single provider anyway. Only then did I realize that that was exactly what I was doing. Plus, I am using a nickname, not my real name. I decided it was time to 'save' my content – again.

This week, I signed up with WordPress. I had always liked the WordPress blogs of my friends, plus WordPress has a good reputation in blogger circles. However, since I was quite happy with my Blogger account, I hadn't really considered using WordPress – until now, when I could be locked out of my google account any minute – or so I am made to believe.

Whatever WordPress is, it's certainly not intuitive. I actually had to read the tutorials to customise it. The dashboard contains words that don't mean anything to me, like 'readomattic', 'Tag Surfer', 'Akismet Stats' and so on. I'm not sure, I guess if my very first attempt of setting up a blog back in 2008 had been with them, I might have given up in frustration. However, the tutorials are clear and you can follow the step-by-step instructions1 well.

While looking for an answer to a question about WordPress settings on 'Ask h2g2', I started to click my way through the provided links on my dashboard, in order to find out what else I could do with my brand new blog page. Being a sucker for statistics, I was thrilled when I discovered the 'Webmaster Tools Verification' feature. I immediately followed the instructions to set it up. Imagine my surprise when I found out that this already existed for my Blogger blog! I can't remember having set it up, so I guess it is an automatic feature for each google blog you have.

I discovered that there are much more detailed statistics than are shown on my blog dashboard! I don't claim to understand it all, for instance, there is something called Impressionen2, the German meaning3 of which doesn't make any sense at all in this context. I looked up the English meanings for 'impression', and I guess in this context it may mean: an instance of a pop-up or other Web advertisement being seen on an Internet user’s monitor. The 'impressions' and the 'clicks' often match (though not in the examples given below), which is surprising enough. However, I was totally baffled by the search terms and which blog posts they linked to:

Now it makes sense for all of the above to link to my blog, but there are many search terms which really baffle me. One of my blog posts came up when people searched for any combination of 'granny' with 'sex', dirty' 'nasty' and 'hot', as well as for 'sister and bro sex'. The only words actually mentioned in the article are 'sister' and 'brother', and the jpg file is named 'granny', but that doesn't show in the blog post itself.

And on with the surprises: a lot of my labels and blog pages (190 in total) are shown as 'blocked by robots.txt'. Inquiring minds need to know, so I searched and found what robot.txt actually is. To my understanding, robot.txt is something the 'webmaster' (ie me) adds somewhere to make specific content unsearchable. However, since I didn't even know what robot.txt was, I definitely never activated it. So, there's a riddle for somebody savvy to solve for me. And while writing this article, I found various other things (like XML sitemap) which need to be explored. I am in internet wonderland. My latest find is 'Whois' when googling for my brand new WordPress blog. The result looks as follows:

Reverse IP:
1 other site is hosted on this server.


See you sometime, I'm off for more adventures in Blogland; next up: finding out how to enlarge the font on WordPress without paying $30/year for the privilege.

1I'd recommend to have those in a separate tab, though, so you can hop forth and back between reading and doing.2For some reason, google insists talking German to me.3German 'Impression' only means: an idea, feeling, or opinion about something or someone; an effect produced on someone.