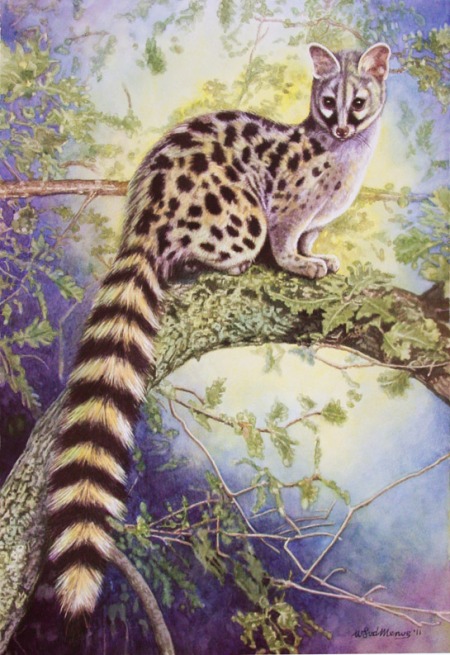 This is an illustration of a Common or Small-spotted Genet (pronounced 'jennet'). This 'species' is very variable and might actually consist of many species and subspecies, which we will only be able to sort out through painstaking genetic studies ... whatever the case, it contains a great deal of diversity. This genet occurs from the south of Africa to southern Europe and Arabia. It is only missing from the Sahara and Namib Deserts, from the equatorial rainforest block, and from some high-rainfall woodland and grassland regions. This leaves an enormous range, over which it occurs in dry woodland and savannah, in shrublands even into semi-desert regions, and in rocky and hilly areas.

Genets are very easy to recognize, all being very similar: small, long-bodied, short-legged, catlike animals. They might be very similar to the ancestors of cats that lived about thirty million years ago: these would have been similar small, mostly nocturnal, fairly versatile predators. In fact, genets might be considered 'relics' of the ancestral cats, having originated from the same family tree and having changed very little for a very long period of time, since their body type seems to be ideal for their lifestyle. There are several carnivore species in other places that have evolved to be very similar to genets, through leading similar kinds of lives, even though they are not closely related to them … for instance, the cacomistles of the Americas (which are more closely related to dogs and bears), and the quolls of Australia (which are marsupials, and thus more distantly related to them than whales, horses, bats and ourselves are). This phenomenon (unrelated species ending up similar due to lifestyle) is called 'convergent evolution'.

Apart from the Common Genet, all other genets are exclusively African. There are not many species ... about eight, in a single genus, 'Genetta' (although the so-called aquatic genet, Osbornictis piscivora, might be a close relative). All of them are slender and soft-furred, with pointy faces and long, bushy tails decorated with bands of black (or brownish) and white. All of them have a light coat colour … it may be whitish, grayish, tawny or creamy ... marked with darker spots or blotches, ranging from reddish brown to black. Sometimes the spots or blotches merge together to form a few longitudinal stripes. (Very occasionally you might find an all-black one, similar to the black leopards and other black individuals you sometimes find among the wild cats.) Most have contrasting, prominent white-and-black markings around the eyes and snout. Most genets are quite small, with a body mass of 1-2 kg (2-4 lbs), but the giant servaline genet of equatorial Africa can attain 3.5 kg (almost 8 lbs). This isn’t really gigantic – being the weight of an average house cat – but this genet seems much larger than its other relatives because it has significantly longer legs.

About half of the species live in dense rainforests, while the others prefer more open habitats. All of them can climb well. Like cats, they have retractable claws. They are nocturnal and mostly solitary. They have large eyes and ears, and lots of sensitive whiskers around their faces, but it would seem that scent is most important to them: they have glands from which they secrete pungently smelly stuff with which they mark their territories. These secretions probably play various different roles in communication. Close-up, it is certain that the white and black facial markings also play a role in their communication, as might also be the case for the erectable crests of long hair that some species have on their backs.

Although genets are members of the carnivore order, they are in practice omnivorous, eating anything they can get: insects, small reptiles, rodents and birds, eggs, and various kinds of fruit. They are fast and agile, but not such powerful, dextrous and deadly killers as cats are, having relatively weak paws and jaws. They rely on a stealthy approach and their camouflage to get them close enough to their prey for a quick pounce.

Solitary most of the time, genets will at least get together to breed! The mother will then give birth to her kittens (up to five at a time) in a nest made in a hollow in a tree, or in a tangle of vines. They stay with her until they are six months old, and at a year, they are ready to breed themselves.

Genets belong to quite a large family of carnivores, the Civet Family, or Viverridae. This family is especially rich in species in Asia, mainly in tropical rainforests. Sadly, many species are very rare or endangered. In Africa, the viverrids consist of the African civet, the genets I just talked about, plus the (probably) closely related aquatic genet, and then the linsangs – these look like particularly small and slender genets. Weirdly, the African species called linsangs are only distantly related to the Asian linsangs which should be considered the ‘real’ linsangs – and which in turn appear to be the closest living relatives of cats. Then there’s the African palm civet – which at first was considered a member of the same family, but is now (by some people, based on genetic studies) considered a very early offshoot of the feline branch of the carnivore order – once again, the similarity being due to convergence/conservatism in build.

The viverrid group seems to have originated in Asia, which is why the greatest diversity is found there. The ancestors of the genets appear to have reached Africa by about 25 million years ago. They have changed little since then. For comparison, our own ancestors only diverged from those of the modern chimpanzees about 5 to 6 million years ago.