Bluebottle gets on his bike and is a bit of a psychopath when it comes to cycle paths...

I believe it is possible to create an ideal world, where trains run on rails, pedestrians walk on pavements and footpaths, bicycles have cycle paths and other motor vehicles1 travel on roads, with no need to overlap. Sadly, we aren't there yet, but slowly the UK is getting a network of cycle paths, which it seems that cyclists ignore.

Over the last fifteen years I've commuted by bike to work in three different counties, cycling up to 16 miles daily. One thing that annoys me is cyclists who do not use clearly designated cycle paths. I often see people on expensive looking bikes with lots of cycling equipment, who have spent vast amounts of money on their bikes, but no time in learning what the relevant road signs mean and where the cycle routes are. I cannot understand why anyone would chose to cycle on the road when there is a safer alternative, created just for them.

The more cycle paths we have, the safer cycling becomes. I should know as I've never been hit by a car whilst cycling on a cycle path. In the current economic climate I believe that whenever a cyclist is seen to not use the designated cycle paths created, they deter the spending on more cycle paths and newer safe cycle routes. The only people who lose out are cyclists, so it is rather self-defeating.

In the UK it is illegal to cycle on pavements, but there are pavements which are both foot ways and cycle paths, clearly labelled with blue circular signs showing both a pedestrian and bicycle. These are either segregated (where cyclists should stay on one side of a line and pedestrians on another) or unsegregated, where cyclists share the pavement with pedestrians but do not have their own clearly marked section to cycle on. It is true that on most segregated cycle ways pedestrians do not seem to pay any attention to the line dividing the section for bicycles from the pavement for pedestrian use, but that should not prevent their use, as only through cycle ways becoming more widely used will their value be felt. It does seem that the standard option for converting pavements to cycle paths just by putting a few blue signs up rather than painting a segregated line. This seems a cheap way of doing it and a bit ambiguous - clearly labelled segregated cycleways are clearer and more obvious that cycling is permitted.

Naturally should you be cycling at a particularly busy time, such as during the school rush when lots of children are on the shared cycle paths, common sense should prevail. 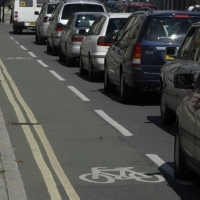 Clearly marked cycle lanes on roads are another alternative to cycle paths, and when crossing busy junctions are perhaps preferable as cyclists are more visible on the road. Cycling on cycle lanes is quite fun: it's like having your own posh red carpet to cycle on, away from the cares of cars. Advanced Stop Lanes, where cyclists get preferential treatment at traffic lights, are not only safer but help make you feel important too. It's just a shame that these are so often ignored by car drivers. The other disadvantage of cycle lanes is that these seem to attract broken glass bottles, jars and other debris that makes them an obstacle course of hazards that can puncture your tyres, which can be rather deflating.

Naturally, when cycling on cycle lanes, as you are cycling on the road you should obey the rules of the road, and stop at traffic lights, zebra crossings etc. and be courteous to pedestrians, and chickens, attempting to cross the road. Cyclists who run red lights give the rest of us a bad name.

If a cyclist makes a mistake, the cyclist can be killed. If a car driver makes a mistake, a cyclist can be killed. This is a bit unfair. Especially as cyclists have to keep an eye on all pedestrians in the area, the road behind them, the road in front of them, roads to the side of them and what is on the road beneath them at all times to avoid hazardous swerving drivers on their mobile phones as well as cycling over glass etc. Cycling is one of the few activities which goes against Darwin's theory of the Survival of the Fittest. The fittest people (myself excluded) cycle to work, but are run over and killed by overweight lazy motorists, some of whom are called Jeremy. To best counter this on busy road it is often best to adopt a well known survival technique - herding. Cycling in convoy makes it easier to be spotted by the motorist predators. There is safety in numbers - after all, it works for zebras.

Still, cycling can be great fun, especially cycling along cycle paths through the countryside, seeing rabbits, or along the coast or river, seeing rabbits and swans.

Come on a cycling safari with me

Come on a cycling safari with me.

If you have enjoyed or hated this blog, or just glanced at the pictures and skim read it, please help me help a friend by providing your answer to this question below: Why does a fish need a bicycle?