Recumbent Bikes - the Future is Laid-back Content from the guide to life, the universe and everything 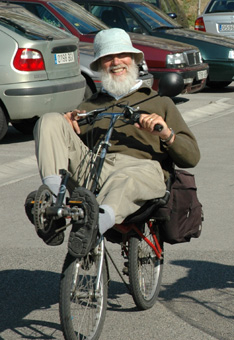 The best bike for touring and urban use is a semi-recumbent, a full recumbent being one that has the rider lying flat a few inches from the road surface; this entry will follow normal usage in taking 'recumbent' to include the non-racing kind.

Racing recumbents are covered in fairing1 and can look like something from a low-budget sci-fi movie: the urban model (such as the Pashley PDQ shown in the photograph) sits the rider up at the same level as someone in a car.

Recumbents are not great over bumps – you can't stand on the pedals and let the wheels shuttle under you. It's manageable, but your appearance may be less than cool as you bounce over ramps. Small wheels slip a tad more easily, making gravel a hazard, and it's hard to imagine a bent (as they are called) bunny-hopping onto kerbs. Nor can you scoot with any semblance of cred. Wheelies are out, and so is 'look-ma-no-hands'.

How important are these disadvantages? Not one bit. They are outweighed a thousandfold by the recumbent's serious advantages.

There is room behind the PDQ's seat, and many others, for a large permanent pannier; it and the carrier can be supplemented with side panniers and a courier-style shoulder bag.

Perhaps the best news about recumbents is that having a super-wide seat with a back to it (best of all woven, as in the PDQ), there is no saddle-sore at all, even at the end of a thousand-mile tour; no shoulder, neck or wrist strain; and no more glaring at the world through your eyebrows. Discomfort from a narrow saddle can be harmful for both sexes, making this also a safety matter.

At first it takes getting used to. If you forget to change down to a low gear before stopping, starts can be embarrassing in the early days, since you can't scoot and you must commit to your first pedal stroke (on the PDQ you can change down while stationary thanks to the hub three-speed gear, multiplied by a seven-speed derailleur); however, with familiarity, a bent is as agile as any bike and can thread its way through the same narrows.

A different set of muscles is used, making the transition from a diamond-frame arguably easier for a less-developed rider. Legs don't get tired of being up in the air, even without cleats; the motion is easy and natural, letting your knees drop to the horizontal. After a longish ride you can still find reserves of energy to lay out the power when it's needed.

The big safety issue is the occurrence of accidents. Two questions to be addressed are:

The quick answer: Yes, with smaller wheels they skid more easily2 but the consequences are lighter.

That first question covers many areas, including braking and steering response, skidding behaviour, and visibility (both of and by the rider). These are treated below; but bear in mind that of all serious cyclist injuries, the most by far result from contact with heavier vehicles, against which no cycle design is very much help.

The second is more cut-and-dried. When you do come off – whether from a surface blip, a skid or a collision – you are dropped on your bum, not your head. You can brake as hard as you like, and depending on the conditions you either stop, skid and stop, or skid and fall over; you do not generally become airborne. Even if you did it would be more like jumping off a wall than diving off a wall.

Picture the momentum of a cyclist in terms of falling forwards along the road. Sketch two bikes with riders, travelling right to left, then turn your page 90 degrees anti-clockwise, to dramatise their momentum. The diamond-frame rider is doing a bellyflop (let's say skydiving). The recumbent rider, however, falls feet-first.

The safety benefit is such that helmets become considerably less relevant3 and the off-recumbent-faller may long for the invention of the bumlet4.

A recumbent bike with rider has a low centre of gravity, but more importantly, you are lying more or less along your trajectory, which gives you much less head-over-heels turning moment. The brakes can be set to 'mighty', since they are not going to catapult you over the handlebars. New models use freeze-frame hydraulic brakes.

Steering is different for each model of bike, but on a short-wheelbase recumbent it is decidedly frisky: there is no moment when the hands can be taken off the handlebars. Beyond that steering is achieved on recumbents in exactly the same manner as on any bike – by a combination of turning and leaning – with the same results. One great advantage of the recumbent is that the pedals are further from the ground than a diamond-frame's, so pedalling need not be interrupted going round bends.

Recumbents have one or both wheels of small diameter, and these are definitely more skid-prone than large ones. However, in many cases, with faith and determined pedalling, the skid transposes into a successful oversteer, the back wheel slips into line and on you go.

This is the source of most concern to the friends and well-wishers of a bent rider. You are shorter vertically, and to that extent less visible, on a recumbent. Experience shows, however, that laid-back cyclists attract infinitely more attention than they were used to in their upright days. This phenomenon will reduce with the increasing proportion of bents to uprights, whereupon they will merge into the haze of bike-blindness5 that all cyclists have come to expect from drivers.

Motorists who lose their right wing mirror find themselves checking in the non-existent mirror, seeing nothing (naturally), and coming up automatically with the message 'all clear' before (with any luck) catching themselves on. A similar mechanism may also explain bike-blindness. A motorist sees a bike, a bike equals no threat, no threat equals 'all clear'.

But take courage from the fact that you will remain more visible than bollards, children, dogs, dustbins, packing cases and many other things that drivers wish to avoid.

Your view is panoramic, though an upright bike would let you see more over hedges. Twisting to see behind is hard, so a mirror is a necessity; but having one, you check behind constantly, and not just before manoeuvres.

All speed records for human-powered vehicles are held by recumbents. There is a record set by a cyclist who keeps close up behind a large car with a thing like a voting booth attached to its back, reaching speeds well above a hundred miles an hour; this is not what you would call entirely human-powered, as it depends on the input of a powerful petrol engine. It is done on a diamond-frame bicycle, and is possible because the car's slipstream eliminates the drag normally suffered by all bodies moving through air. Slipstreaming accounts for the choice of the V-formation by flocks of geese, and is a major part of cycle racing strategy.

Reduced air resistance. Going downhill you freewheel past your twin on an upstairs model – simply because the profile you present to the air is smaller. Air resistance is the only thing that prevents bikes from doing a hundred miles an hour, as the guy in the voting booth (see above) demonstrates.

Some bent riders miss the option of standing on the pedals (a refreshing change for an aching back – except now you don't get those), but it's not a dead loss: you can increase your output a lot by pushing hard against the back of your seat. You have to learn not to haul on the handlebars - it's just not helpful.

Recumbents are not at all a new idea; they were among the first cycle designs. Why then, if they have the advantages described above, are diamond-frames still the norm?

In the 1930s, a French second-category professional track cyclist named Francis Fauré began winning races on the Velocar, a recumbent designed and built by Charles Mochet. When he achieved a new 60-minute distance in 1933, breaking a record that had stood since 1914, the Union Cycliste International was forced to debate whether the Velocar was truly a bicycle (what else, one might ask), and to decide whether the record would be legally recognised. In 1934 the UCI ruled against the Mochet-Fauré record, banning recumbent bicycles from their races and setting bicycle design back for decades.

1Aerodynamic shell.2Let's not go overboard about skids; they don't happen unprovoked, and almost all are avoidable if you have the leisure to slow down.3For figures about a curious rise in head injuries since helmets became widespread in the US, see this New York Times article.4The idea of self-inflating trousers does turn up, but don't brace yourself, there are still pressing problems to iron out, some flies in the ointment...5A letter to the Irish Times from a bus driver claimed that only the minority of [Dublin] cyclists behave responsibly. The more you reflect on this the odder it starts to look. What does it take to be seen by a bus driver? Pirouettes?