I went to Turkey for a week, to broaden my horizon and crawl through ruins. It was a guided tour, so I didn't try to learn any Turkish before we left. I may try to do that soon, though. Since all my friends want to know what I experienced, I thought I'd share with a wider audience who may be interested as well.

From Priene we went to Didím (formerly known as Didymaion) for lunch. The restaurant was nothing special, just your average mass tourism restaurant offering a buffet with salads and lukewarm vegetables. We weren't particularly hungry, so it was OK. The toilets were clean, if crowded – apparently all (or most) of the tour buses had arrived within just a few minutes from each other, and you can bet the first thing all women needed was the loo. A word about the toilets: the very first toilet I encountered on Turkish ground was at Izmir airport. It was one of those porcelain basins in the ground – like they have in France1, too. I had totally forgotten about it, but prepared to have to use them for the week. However, there is a mix of toilets, and you'll usually find the sort we have in Germany and the UK, so it wasn't a problem after all.

After lunch we walked to the Apollo temple. We were told that Apollo was the twin of Arthemis, and that that's how the town got its name, Didymaion meaning twin in Greek. 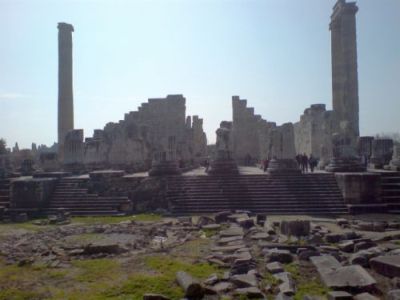 It is a huge complex with more than 100 stone pillars at its length and I don't know how many at its breadth. Due to the enormous size it was open, as with the means of the time there was no way to put a roof on it.

Just like its counterpart Delphi across the sea, the Apollo temple at Didymaion was very important. Everybody who needed advice went there. We were told that people sometimes had to wait for days for a reply. In case there were more people seeking advice than the priests could handle in one day, people had to draw straws. The winners then told their concerns to the first group of priests who carved it into stone tablets and brought them to the second group of priests. These priests chewed laurel2 leaves all day and inhaled toxic gases from the various wells within the temple complex until they were in trance3. They then mumbled some reply which was interpreted by a third group of priests who announced the results to the questioners. The questioners had whiled away the time by playing board games which are carved into the floor stones at the temple entrance.

The Gorgons (two of which you can see on the banner above) were meant to keep unauthorised people out of the temple.

The actual Apollo temple was a small building near the rear of the impressive complex. You can see the remains of it in front of the photo below. 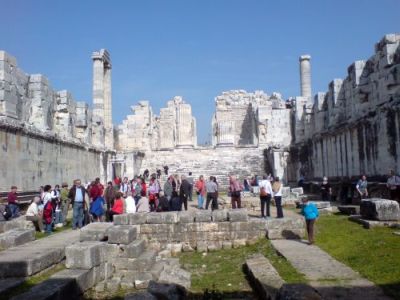 There is now a laurel tree growing in it (you can see its top if you look closely). The whole building around the actual Apollo temple was constructed to impress people and to point out its importance. When I showed the photos to my eldest son and told him what I had learned, he said that those were the first syndicates, and that it was the third group of priests who actually made the 'prophecies' because they could 'interpret' whatever was convenient. I don't think our tour guide mentioned it, but I'm sure they were extremely well paid.

There was a road leading from the rich and important harbour city of Milet to the oracle at Didím. Unfortunately, a high wall blocked me from taking a photo of its remains. We took a modern road to go to Milet, which was our third and last site to visit on that day.

1 I have since learned that the French call them toilette à la Turque.2Laurel in Turkish is Defne (Daphne), btw, after the mythology.3This gives a whole new meaning to the term 'high priest'