I went to Turkey for a week, to broaden my horizon and crawl through ruins. It was a guided tour, so I didn't try to learn any Turkish before we left. I may try to do that soon, though. Since all my friends want to know what I experienced, I thought I'd share with a wider audience who may be interested as well.

My first day in Kuşadasi, Turkey (we had arrived late at night, so I hadn't yet seen anything of the country) found me discovering that we had a sea view from the balcony of our hotel room. There I was, just a few metres from the Aegean! The program for the day included various sights, so after a very good breakfast we left at 9.30am. We went to Priene first. On the way there, Yekta, our tour guide, told us interesting things about his country.

For instance, the water heating system which you'll see on many roofs. It only needs a plumber to install it, but the initial cost may be too high for some people. However, it only needs about ten minutes of sunshine to provide the household with hot water. There is a downside, though: you can't regulate the temperature, so you may get boiling hot water from your tap. The cooking and heating is done with propane gas (except for the big cities like Istanbul or Ankara, which have natural gas).

We were greeted with gün ayden!, which means, literally translated: have a bright day, or, simply: good morning/day. Yekta had us repeat it, and we were asked to greet people in this manner. Our driver's name was Fahri, which was funny, because 'driver' means Fahrer in German, so our Fahrer was Fahri.

The Meander plain (called after the river Meander which meanders through the country) is very fertile. The main income here is agriculture and tourism. Since the climate is Mediterranean, they have up to three harvests a year. Plants that are grown here are rice, cotton, dates, figs, peaches, olives, bitter oranges, oranges, satsumas, lemons, artichokes, etc. There is a crop rotation in order to avoid soil depletion. Cotton, for instance, is sown in May and plucked by hand in August/September – but only on dry days, as the workers are paid by weight, and no farmer wants to pay for wet cotton. The oil of the cotton seeds is used (amongst other things) for margarine, what is left serves to feed the cattle.

Our first stop was at Priene, a place which is said to have the oldest and largest Hellenistic amphitheatre, parts of which you can see below. We were very lucky with the weather that day, it was a bright, sunny, and warm day. There were some professional photographers there. I didn't realize it for a long time. Apparently, they know exactly when to expect a group of tourists, and you can hardly shake them off. 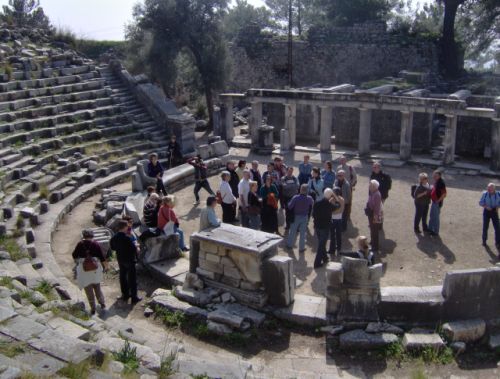 The amphitheatre had room for 6,500 spectators. Only male spectators were allowed in (same went for the actors), so it is estimated that the whole town had approximately 26,000 inhabitants. In the background you can see what is supposed to have been dressing rooms for the actors. The stage (or pit, as Yekta called it) went right up to the first row which had seats like little thrones for the leading class.
The theatre had to be hewn into the mountain because the Hellenes didn't have the knowledge to build a substructure, like the Romans did.

The climb up there had been tough as the stone steps were extremely steep – it made me wonder how the people who lived there had managed climbing them each day.

The next thing we learned was that they had a perfect public water supply system the pipes had different diameters according to the needs of the area they lead to. They had sewage pipes, too, remains of which can be found on the paths downhill.

A bit further uphill, we could see the remains of the Athena Temple.

The town dates from Ionian times and was re-founded in the middle of 400BC. The Athena temple dates from a little later, as does the amphitheatre and lots of other buildings. The town was built after the same system as New York or Mannheim thousands of years later. It used to lie at the sea, but due to the river Meander changing its course, it is now several kilometres inland. That was probably one of the reasons why it was deserted by its inhabitants. Earthquakes and wars may have added to this. I don't recall if there was any mythology connected with Priene. Anyway, it's a fascinating place, especially in nice weather.

There is a lot of flora which is unknown to me, so I didn't only photograph the stones (some were connected with iron or lead clamps which still exist), but I photographed some plants, too. Yekta told us that spring was the worst time – no, he is not suffering from hay fever, but from women picking plants and coming to him asking which plants they are. This had the desired effect, I don't think anybody from our group picked any flowers.

We were left to our own devices after Yekta had finished his explanations, and so we sat down on some of the many stones lying about and had some tea. It is amazing that you can go just anywhere you like in those ruins. About half an hour later, we met at the bus and went to our next destination. I'll tell you about it next week if you are interested.