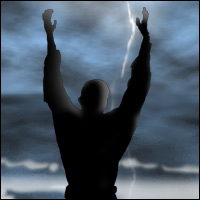 More than one h2g2er has inquired thoughtfully on our site concerning the value of what we learn from the recent past. More than one has expressed unhappiness with the part played by his/her nation or ethnic group in the less edifying chapters of human history, and wondered what, if anything we could glean from all this.

Shakespeare put a speech into the mouth of an historical figure, one Marc Antony, to the effect that "the evil that men do lives after them. The good is oft interred with their bones." I don't believe that for one minute.

The good that people do is often a gift that keeps paying itself forward.

And I have left in Israel seven thousand, all the knees that have not bowed to Baal....—1 Kings 19:18

The quote above purports to come from the god of the Hebrews. He's speaking to Elijah, one of my favourite characters in the Bible. For one thing, Elijah has a very dry sense of humour, especially when speaking to idiots like, say, kings. For another, he would be right at home in a science fiction novel – he has paranormal talents to spare, and is not afraid to use them1. Dangerous fellow, Elijah, very forthright, and not easily cowed by the likes of, say, Jezebel. Also an Olympic-level marathoner. But after awhile, even superheroes get the blues. Even in the Bible.

What Elijah did when he got depressed was go sit under a juniper tree. Why, I don't know, maybe he liked the smell or something. But the angels took care of him, and he ended up in a cave, staring unimpressed at the CGI going on outside, and telling God that he, Elijah, had had it. It was hard to fight against the social injustice that was going on in his country. The government was robbing the poor and perverting the court system. Even turning off the rain hadn't made them stop stealing everything that wasn't nailed down. Even though the king was scared to death of him, it hadn't stopped him from committing murder just to expropriate his neighbour's vineyard. Nobody was doing anything but him, and it was no use at all, so just knock him in the head, please, and get it over with.

To which God replied, "I have left in Israel seven thousand..."

Big shock. Elijah was not alone. There were seven thousand people who knew better than to vote for the Ba'al Party2. Elijah did not know these people personally, but they were there, and that was enough. Lesson: There's always an underground. And it's always working, whether the Gestapo knows about it or not.

Where Are They Hiding?

Back in the 1980s, Australian novelist Thomas Keneally electrified us with his work Schindler's Ark. That's the right title – the film came later. Oscar Schindler, a Moravian German Catholic with a sense of humour and a commitment to saving people that wouldn't quit, rescued about 1200 people. The people at Yad Vashem declared Herr Schindler to be a Righteous Person3, and a tree was planted in Israel in his honour. Many people around the world owe their lives to this man's bravery.

Irena Sendler was a Polish social worker who saved 2,500 Jewish children and babies from the Warsaw ghetto, by smuggling them in imaginative ways, getting them to foster homes, and then saving their true identities in jars buried under an apple tree – so she could try to reunite them with their families later. This lady, who had problems with the post-war government in Poland, was also honoured as a Righteous Person.

"And what shall I more say? for the time would fail me to tell of ...the prophets who through faith...out of weakness were made strong,...being destitute, afflicted, tormented...of whom the world was not worthy...—Hebrews 11:32-38

I sometimes hear people complain about memorial days and commemorations. Oddly, I never hear them complain about the generalised, patriotic ones. They're usually right there for the parades and military celebrations. No, you know the ones I mean, the ones they complain about – days like Martin Luther King Day, or the Days of Remembrance for the Holocaust. The ones where they say, "It's time to move on." They wonder aloud whether these days serve any purpose. I suspect their motives for saying this, and would like to note here what our children are learning from these commemorations.

A few years back, when I was a guest teacher at a US high school, I found out that the students in my German class didn't understand about the Holocaust. I found this out when they asked me, "If the Jews weren't welcome in Germany in 1938, why didn't they move to Israel?" I sent away to the United States Holocaust Memorial Museum for lesson plans for the Days of Remembrance. The students learned a lot, astounded me with their insights, and astounded me even more with the questions they directed at the local rabbi I invited. She was complimentary about the class, and Billy Jones stopped doing dorky things like painting swastikas on his hand in Mrs Goldstein's English class. He just wanted to know what it was all about, you see...

Kids all over the country have been astounding people with their response to the story of the Holocaust. Not only do they learn about it, but they see it as an opportunity to act on their learning and teach tolerance to others. The initiatives they start often have far-reaching effects.

Like the kids at Whitwell Middle School, in Tennessee. Their Paper Clip Project, which started out as a way to visualise the loss of millions of lives by collecting paper clips, resulted in the transportation of a cattle car to Tennessee, the creation of a permanent memorial to the lost children, and healing encounters between survivors and others of all faiths and backgrounds. It wasn't just about being sad. It was about doing something to make it better.

Like the four girls from Uniontown, Kansas, who learned about Irena Sendler. The girls' play about about Irena's rescue actions, called Life in a Jar, has toured on two continents and brought attention to the work of Polish rescuers. That's a lot of tolerance teaching. The Poles said they were "rescuing the rescuers". They got to meet Irena before she died, at age 98.

Think about what those kids learn. They learn about what happened, and how horrible it all was. But they also learn about people who made a difference, even if that difference was never recognised in their lifetimes. Most important, they learn how it was done. That's priceless.

And those who learn peace will be ready for it. All those kids are going to be part of the seven thousand.

"And the fruit of righteousness is sown in peace of them that make peace."—James 3:18 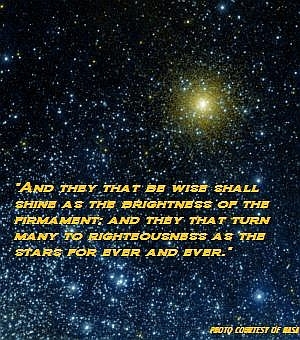 1Try starting a rainstorm by putting your head between your knees. I dare you.2Note that I do not identify any particular group with this party. I do not need to. You know who you are. People who lie about these things make themselves ludicrous, like this gentleman, who seems to believe we can be fooled into thinking that the EPA are agents of the Antichrist.3The Hebrew word for "righteous" is "tzadik", and it doesn't mean "somebody who is holier than thou". It means somebody who fights for social justice.