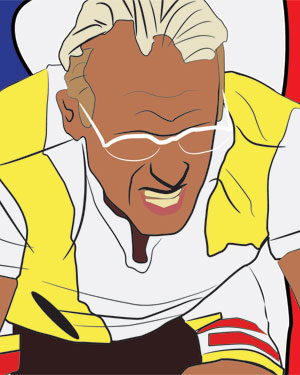 Today I was listening to the radio. Radio 5live had an interview with Usain Bolt, the great sprinter. Here is a man that has breathed new life into a sport struggling with drugs scandals. Not only is he the fastest man that the world has yet seen, but he brings a huge heap of character with it. It is hard to dislike the man. At the same time, the news was coming out that Laurent Fignon had died.

Bolt is a laid back champion, beloved by the press. Fignon could hardly have been more different. He was an intense, prickly character who often found himself on the wrong side of the notoriously subjective French cycling press. However, like Bolt he was a great champion, and like Bolt he was a character.

I first started watching the Tour de France as a seven year old in 1987, but in my opinion, the greatest race was in 1989. Fignon's cycling story starts a few years beforehand, in 1983. He was a 22 year old rider with the Renault team. He had been part of the squad that helped Bernard Hinault to win the 1983 Vuelta a España. Cyrille Guimard, the team's director didn't want to put the young rider into another Grand Tour, but with injury to Hinault, Fignon was added to the squad. The team were told to go for stage wins, and they hoped that Fignon may get the prize for best debutant.
After the first mountain stage, he was second behind Pascal Simon, the eldest of four cycling brothers who would be part of the French cycling scene for another 25 years. Simon broke his shoulder blade, and carried on for another six stages before Fignon took over the lead. He won the race overall by over four minutes and nabbed a stage win. Fignon was now the youngest rider ever to win the Tour de France.

The next year was going to be different. Not only was Hinault, the four times champion, back, now racing with the La Vie Claire Team, but a young American rider had been spotted by Guimard and brought into the Renualt team. This man was Greg LeMond. Not only did Fignon beat Hinault, but beat him by ten minutes and won five stages along the way. LeMond finished third, the first American to stand on the podium. Robert Miller of Scotland finished fourth; no British rider has finished higher. Miller also won the climber's jersey, the only British rider to have won a Tour Jersey.

As a two times French champion of their race, he should have been a national hero. But he wasn't. The quiet Parisian was seen as aloof, and because he wore glasses, an intellectual. Nicknamed The Professor, he wasn't going to rival Hinault, the Breton folk-hero, for a place in the nation's hearts. His trademark was a blond ponytail. That pony tail is still one of my earliest strong memories of the sport.

Over the next two years LeMond and Hinault, now teammates, traded Tour de France wins. Fignon was injured. In 1987, Fignon took a stage in the Tour de France on his way to seventh, and also secured a podium position in the Tour of Spain. In 1988, he got a few wins, but didn't figure in the major Tour placing.

And so to 1989. All eyes were on Pedro Delgado, the winner of the 1988 Tour. Over the previous two tours, he had proven himself to be one of the best climbers in the world and it had taken a super-human effort by Stephen Roche to beat him in 1987. In 1988, despite some controversial drugs test results, Delgado dominated the race.
Fignon had come into the tour in good form, as the top ranked rider in the world and the winner of the Tour of Italy, back in the days when the major riders rode more than one Grand Tour a year, aiming to win them. He lined up in the yellow and black striped strip of the Super U team sponsored by the System U supermarkets.
Charley Mottet was the new French hope for a country looking for a man to succeed Hinault.

Few people were discussing the 1986 champion, LeMond. Shortly before the 1987 race, his brother-in-law had shot him in a hunting accident. LeMond almost died. After two years of recovery and new illnesses, he was back, with a new team and 37 shot gun pellets still in his body. He was aiming for a top twenty placing.

What nobody expected was that Delgado would arrive late for his prologue time trial and lose the best part of three minutes to his rivals. This was compounded by a poor team time trial. Two rivals emerged. One was Fignon, the aggressive Frenchman who attacked where he could and was backed by a strong team. The other was LeMond, the great innovator. He made his time gains mostly in the time trials, where he brought in aerodynamic helmets and handlebars, something that Fignon thought was illegal. LeMond's team was too weak to help him in the high mountains and he had to try to get help from his fellow American, Andy Hampsten. They traded the lead three times. They both won mountain stages and LeMond had taken one of the time trials.
While Fignon had goaded LeMond to attack through the press, they were also on his tail. At one point he spat at a photographer who was following him.

Traditionally, the final stage sees the whole race ride into the centre of Paris and then lap a few times around the centre. Not this time. This time, they were going to have a third long time trial, an individual race against the clock to the finish line. Nobody before the race thought it would work. How wrong they would be.

Fignon came into the last stage with a 50 second lead. Few people in the world could beat Fignon against the clock on his day. But was it to be his day? He had hardly slept, kept awake by saddle sores. LeMond lined up on his special aerodynamic bike with an aerodynamic crash helmet. Fignon was to start behind him: while he had a solid disk wheel on this bike, he made no other concession to the science of aerodynamics. Still, 50 seconds must be enough. LeMond produced the ride of his life. Nobody has ever gone faster in a full time trial in the race. Then everybody had to wait. They waited past the time of LeMond, the clock was ticking away. Fignon was hugging the side of the road, his pony-tail flying in the air. Everybody knew the time he had to beat. They watched it go past. LeMond celebrated. Fignon finished third on the day. He was collapsed on the floor. The great champion had given his all to try to reclaim his crown.

The 1989 Tour may well have marked the end of an era. LeMond's win caught the public imagination in the US and he brought in much more money to the sport. His technical innovation also came to feature heavily, with everybody using 'funny bikes' after a few years. Stage 9 was won by a little known helper on Delgado's team, Miguel Indurain. He would go on to win five Tours in a row. The next year, again won by LeMond, would see the arrival of the Eastern Bloc riders, many former track stars, who excelled at sprinting.

Looking back over 20 years, the sport has changed. Riders are now backed up by a radio contact with their manager. Always behind sunglasses and under a helmet, they are now more tactical pieces on a road shaped chess board. Fignon and LeMond battled against each other, face to face. The spectators could see their faces, unhidden and could see the pain they were causing each other in the fight to be the best, in their fight to regain the title they desired more than any other.

Fignon didn't contend for another Tour. He finished 6th in 1991 and got a stage win in 1992, but would leave the sport as he saw drugs helping lesser teammates match his performances. He admitted to having recreationally taken drugs, in an era when the Columbian teams were major players in the sport.

Let's move now to a young boy on family camping holidays. He used to see the face of the great rider smiling down on him from billboards and in store adverts for System U supermarkets. He still remembers these signs, and the great man who had brought the best out of his hero Greg LeMond.

Fignon helped to organise some races, and then much to everybody's surprise, started working as a commentator. He revealed in 2009 that he was undergoing treatment for cancer. He was very ill in 2010 and his voice was almost gone. He still turned up to work on the 2010 Tour, commentating when he could. He fought to be a part of the sport he loved until the end.

Flawed, yes, but a great champion, there can be no doubt.