Everyone (well, almost everyone) knows that the king of Rock 'n' Roll, Elvis Presley, died in 1977, aged 42. He was such an iconic figure that since his untimely demise a whole industry featuring his image has sprung up, including a positive glut of impersonators (the most serious of whom prefer to be known as "tribute artists"). Some of these acts are good, others are so dire as to invite ridicule and even accusations of sacrilege. If you're just lucky enough, someone who was voted the "best UK Vegas Elvis" will be booked to perform at a venue near you, so you can go along and make your mind up as to whether these "tribute acts" are worth the hype or not.

Myself and a group of friends saw a poster advertising "A Tribute To Elvis" at the Casablanca Club in Grimsby where we'd gone for an evening out to see and listen to a Roy Orbison tribute artist. He was fantastic; I was completely bowled over by his look, mannerisms, singing voice and even the speaking voice — I've been singing his praises ever since and was determined to see other tribute acts if they were of this calibre. From then on we were counting down to Elvis night. In the 'Coming Up' section of the local newspaper a few days prior, there was an advert for the 'Tribute To Elvis' but they gave out the wrong address of the club where the performance was to be held. Oops!

Saturday, 24 July, 2010. I'd bought a new dress and rather blingy accessories especially for the occasion. My escort arrived and we arrived in good time, securing a comfortable, long curved sofa seating area for the ten people in our party. Surveying the other clientele, they were a good mix of old Teddy Boys wearing Elvis t-shirts and jeans and others who'd raided their wardrobes for 1960s garb. The atmosphere was terrific, everyone looked excited and happy, and pretty soon the place was packed. About five minutes before show time the manager thanked us all for coming and hoped we'd have a brilliant night, in fact he was surprised so many turned up with the Telegraph getting the address wrong, unfortunately giving out the address of a takeaway, and he got a big laugh when he finished off his speech saying he'd had on the phone "a guy from a kebab shop swearing he's not Elvis".


When the lights dimmed at exactly 9pm and a drum roll sounded, we all jumped to our feet to witness the white jump-suited Rob Kingsley arrive on stage, guitar poised and ready. He sprang into action straight away with a rock 'n' roll number, before introducing himself to us and telling us a little about himself and his band. To say he looked the part is an understatement, his jumpsuits are specially made for him by the people who supplied Elvis himself. The moment he draped the first scarf around his neck and beckoned to some ladies on the dance floor to come towards the stage, there was a mad rush, but somehow an orderly queue formed, and no-one left empty-handed. Some even got a kiss! Rob wasn't averse to posing for photos during his act, he seemed happy to bend down from the stage and place his arm around a waist and happily pose with the excited lady. 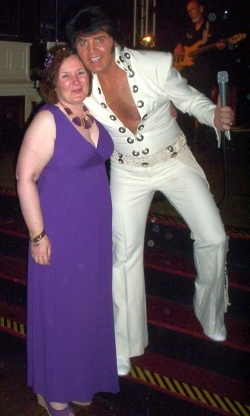 Rob sang all of Elvis' well-known hits and a few special requests, such as "Sweet Caroline", which got the whole audience swaying to the music and singing along. When Rob was thanking his band and also the manager of the Casablanca for inviting them, he asked if he1 was around to come up onto the stage and give us a song, which he did, to the delight of the audience!


After about 90 minutes Rob and the band went off for a half-hour break and then they came back for another session of love songs interspersed with pure rock. From the way he was still leaping around the stage at almost midnight, this guy must be incredibly fit! When he sang his final song he told the audience that he'd be down to mingle afterwards and sign any autographs. His crew were selling CDs and he joined them at the desk, kissing the purchasers and posing for photos again. I approached and told him one of my group couldn't dance because she uses crutches to walk but she'd enjoyed his show, and asked if he could spare a minute to go say hello. He asked where she was and I led him over. He shook hands with my partner Gordon who was sitting with Judith and when she realised I'd brought the star of the night along for a chat with her, her face was an absolute picture. I asked if I could take a photo of them and Rob sat between Judith and her friend Jackie, and I got a lovely snap for them to treasure. Suffice to say we all had a great time, it was a fabulous night out we'll remember for a very long time.