This entry may seem a bit bitty and I apologise for that. I've got a lot of thoughts in my head that I need to get down as quickly as possible.

Tired. SO tired. Yesterday we did two tours. One day tour, one 'night' tour. Which meant several sites done twice, and a total of over 12 hours on the go. Last night, when I went to say goodbye to Simon and Guy, I had pretty much lost the power of speech, let alone the ability to stand unaided!

One of the things we did twice was we took the Peak Tram, which is a wonder of Victorian engineering. Built in 1888, it is the steepest tramway in the world, and runs up to the top of Victoria Peak. It's a slightly hairy ride, but it's a fascinating experience, in lovely old Victorian cars. The view from the top is spectacular. Apparently. The peak has been shrouded in mist for almost all of the two days we have been here. We caught a glimpse on our first trip up, but on the second, it was a complete white-out. Visibility was down to a matter of about twenty or thirty feet. I felt bad for those who hadn't done the morning tour. They essentially got the top and saw nothing. Absolutely nothing. We could barely see each other! 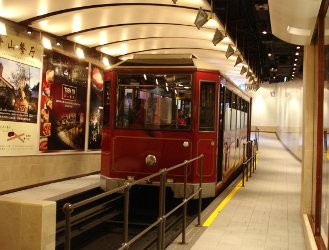 As part of our morning tour, we were taken on a sampan ride. Sampans are small motorised boats that seat ten or eleven and are essentially motorised rowing boats with a canopy over the top. They are not particularly stable and the harbour is surprising choppy, but it was a very enjoyable ride. It only lasted about twenty minutes though, which was a shame. Oh well, can't have everything.

Overhyped. The light show in Hong Kong Harbour. Seriously, don't bother. When we came before, we went out on a harbour cruise and saw all the lights on the skyscrapers. Very pretty. This time, they have apparently created a light show and set it to music. Well, you know what? They flash on and off all the time, anyway. We couldn't tell the difference. The "music" was dire, the "show" virtually non-existent. As far as I could tell, the only difference was the apparition of green lasers on three rooftops. There was one building that seemed to turn its decorative lights on and off ALMOST in sync with the music, but that was it. Big deal. Good thing it was free, otherwise people would have been very annoyed indeed! Granted, it was a bit misty, which may have muted the potential effect slightly, but it was singularly unimpressive, I'm afraid.

On the plus side, there were a few Christmas and Chinese New Year lights up, which were pretty. It's the year of the Tiger, which is my year. Hah! One of the shopping centres had some lights on the side which looked like a tree. Gives a whole new meaning to being "lit up like a Christmas tree"! 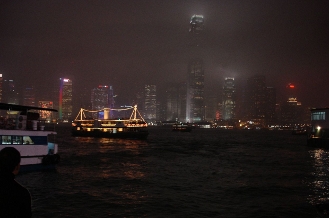 This morning, we went to the Peninsula (one of the world's top hotels) for a cup of coffee. Has to be done, darling. It's SO civilised. Imperialism was probably a Bad Thing, but the hotels left behind are fabulous. I had a hot dog (beef). At the Peninsula. Shame on me.

It was very good, though!

Rude passengers. I know I've ranted about the rudeness of people on the ship before, but yesterday we hit a new set of highs (lows?). We have been pushed, shoved, elbowed, ignored, barged through and one woman tried to deliberately slam her stick down on my foot to enable her to get in front of me in the queue (she'd already walked straight past the four people in front of her). Remember, mum is walking with a stick in one hand and the other IN A SLING. Never seen anything like it. The rudeness we have witnessed has been indescribable. I'm not exaggerating. I genuinely do not have the words to describe it. It's bizarre. Today, in the lift, the doors opened at the level where we need to be to disembark. Two women charged into the lift. I said "EXCUSE ME. COULD YOU LET US OUT FIRST PLEASE?" One woman apologised, saying that she thought we weren't getting out. Seriously, there's a whole lift full of people. This is the floor for access to the gangplank and the shore. Did it really not occur to you that SOMEONE might want to get out?! Perhaps if you'd waited TEN SECONDS after the doors opened, you'd have found out? Her companion said nothing. No apology, nothing.

Stupidity. We have some really quite ignorant people on this ship. Last night at dinner, one couple had never seen duck in pancakes and needed to be taught how to do it. Another couple had never seen, let alone used, chopsticks. Another person the other day had no idea that John Dory was a fish, and Dad was asked what "compote" meant. Seriously?!

The people of Hong Kong can be irritating, too, though. They have no concept of personal space and do not consider it rude to walk straight into you! Really! They don't look where they're going and even if they do see you, they're quite content to walk straight through you. Even if you have a sling on your arm and a walking stick! Dad and I had to "run interference" in order to protect mum! (This consisted of walking side by side in front of her to force people to go wide round both of us and, ergo, give her a wide berth.)

Came to buy electronics but totally failed to buy anything. Those who did want to sell either didn't have what I wanted or wanted ludicrous prices (higher than London!). Others wanted to sell but seemed so shifty and untrustworthy, we walked out. Apparently, asking for a digital camera with a viewfinder that works well in low light is astonishingly over-demanding of me. They could or would only offer me one or the other. Moral of the story: do more research before you get here. Know EXACTLY which model you want before you arrive. Then go out and find it.

HK is nowhere near as cheap as it used to be. We were only here in 2005, but it is certainly not the bargain capital it used to be. Not by a long chalk. There are also now a LOT of fakes in the market. So you can buy something that looks like a Sony, has all the right blurb and bits, guarantees, holograms, the works, get home and find out when you ring for help that that model simply doesn't exist. This problem also exists in Tenerife, but it makes shopping very trying. Moral of the story: as above!

So I've bought nothing. I bought a bag for mum for her birthday and some postcards. That's it. That's the product of my two-day spree in Hong Kong. So disappointing. And it's not like I wasn't eager to buy. My camera has a dead pixel which is ruining my photos, so I REALLY wanted a new one! But if you don't have what I want, I can't buy it from you.

This is the problem with buying clothes as well. There's some beautiful stuff and I really wanted to buy some, but they don't make western sizes. I don't just mean big enough for my fat rear, I mean anyone over five foot tall with breasts or hips, or (heaven forbid!) both, can forget it. It's bizarre. They know what we look like. They act like they want the business. They survive on tourism to a large extent these days (Hong Kong now "makes nothing" according to our tour guide yesterday), and yet they absolutely refuse to make clothes big enough for their customers! Mum found one shop in Stanley Market that sold her type of stuff and bought all she (or rather dad) could carry. Maybe that'll give the neighbouring businesses a clue as to what they need to do to get some business. Or maybe not. I'm getting very philosophical about it - although no less bitter or annoyed, bizarrely - if you don't want my money, you don't have to have it. No skin off my nose. If you provided my size, I'd probably buy LOADS, but if you won't, I can't, can I?

Further passenger rudeness: This evening (Hong Kong Day 2), as we came out from dinner on the ship, there was a bit of a scrum for the lifts. People wanted to go up on deck to see the light show again (presumably in the hope that it would get better the second time) and it had already begun (it was a little after 8pm). Once again, no manners whatsoever. When a bunch of people queue-jumped past a disabled friend of mine (she walks with one of those three-wheeled walker things), I threw a parting shot into the lift about no room for the people who had been queuing the longest as the doors closed. They probably didn't even hear me. But some woman who had just arrived in the queue started yelling at me for "causing a scene". Like I'M the bad person here. When the next lift came, my friend was allowed in first. If that's what it takes to get some decent treatment for those who are less able on this ship, I'll do it again. I have had enough. I am sick and tired of the rudeness and appalling behaviour of the people on this ship and I'm not going to stay quiet and fume privately any more. From now on, when someone acts rudely, I'm going to tell them so. To hell with it. If you push or push in front of less able people than yourself, you deserve a bloody kicking, not least a tongue lashing. This worm is turning. I've had enough. This is war.