When we voted for the date for the London meet, I hadn't realised that it was a long weekend in Germany due to Ascension Day being a holiday here. Add to that that it was half gone February once the voting was closed, it meant that I had trouble finding cheap flights. I paid nearly twice the sum I usually pay, and the only plane going back I could find in that price range, was leaving Heathrow airport at 6.25am on Sunday. Well, I didn't bother booking a hotel for the night, but decided to stay at the meet for as long as possible, then spend the remaining few hours at the airport.

All went well with my flight on Friday, I didn't even have many troubles with security at Frankfurt airport this time. The weather was fine, so Icy, who had met me at the airport, and I wandered around the Butler's Wharf area after I had filled up on coffee, and before meeting Pheroneous, who left work for a couple of hours so we could have a chat.

Unfortunately, he had to go back to work, so Icy and I made our way to the George Inn to meet others for the Friday Fringe. Next arrivals were MazinMadfiddler and Stunningfrenchie, shortly followed by Bald Bloke, and Alex Ashman arrived, too. Fortunately, Bald Bloke noticed that quite a few people were leaving, so there was a vacant table inside the pub, which we hogged then. I'm glad we did, as it was getting rather chilly outside. I texted Beatrice, who said she'd be with us soon. It took longer than I could make it, though, because I had only slept 3.5 hours that night, and really needed to go, or else I risked falling off the chair. So when Bea arrived, we had all gone home.

After a full English Breakfast which set me up for the day, I climbed up the Monument. That's 311 steps. I had a marvellous view over sunny (but windy) London from up there. I got a nice certificate when I reached the ground again. Turned out, that Beatrice walked up the Monument, too, albeit later than me, so we didn't meet then.

As I knew the tube lines to Heathrow wouldn't run that weekend, and I wasn't keen on trying to find a bus (I have my experiences with finding buses in London), I decided to spend the extra quid and go to the airport with Heathrow Connect. So I went to buy a ticket, then took a tube to Waterloo, from where I intended to walk to Tate Modern. Silly me didn't look on my map, so at the London Eye, I turned left instead of right. After I had walked for nearly 30 minutes and still no Tate in sight, I eventually asked some passer-by. Well, turned out I had to walk back where I had come from. However, the Tate Modern is much farther away than I had thought, so after a 9o minutes walk, I eventually arrived there - half an hour late. My feet were killing me (I have huge blisters on my soles), but I could sit down with a coffee and wait for those who hadn't yet arrived.

Eventually, Beatrice was there, too, and we went to see some of the exhibitions. As we were quite a few people (in no particular order: Todaymueller, em6, h5ringer, Solnushka and Star,Stunningfrenchie, Agapanthus, Scrumph, MazinMadFiddler, Mrs and Mr Zen, Beatrice and yours truly, later joined by Trillian's Child, we split into a few groups. We had agreed to meet again at 4.30, then move over to the pub where the eds were expected at about 5pm. 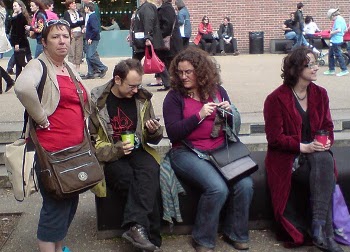 Somebody suggested to walk up to the pub, giving us the impression that it was close. Well, it wasn't! But still, we made it there and were greeted by Whoami, Mu Beta, Jack Winterbourne and a friend of his, Sam and Chris. A bit later we were joined by Coelacanth, Loftskywalker, Alex Asman and Reddyfreddy1.

It was absolutely great to talk to everybody,especially to Sam and Chris who had a lot to tell about the very good prospects of the site. Oh, and they brought goodies, too, so I managed to get hold of an h2g2 hat, which people said suits me. Got a t-shirt, too, which Bea had shrunk in the laundry, so it doesn't fit her any more. It was an absolutely friendly and welcoming atmosphere, as always. I'm sure our meet novices (em6 and loftskywalker), and nearly meet novice Todaymueller (who had attended Hypatia's birthday bash last year) will confirm2. 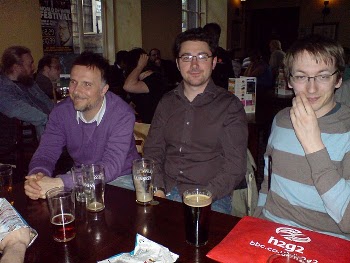 We toasted to absent friends at 8pm, as quite a few people didn't make it due to sudden illnesses (Dragonqueen and 2legs); for others, work got in the way (Mina, Malabarista and, I think, Bluebottle) and yet others met in Hull (TRiG, Prof Animal Chaos, ST, lil and husband, Galaxy Babe...). We tried to get in touch with the Hull crowd via Skype, but their connection didn't work. However, we had a video chat with Dragon Queen, which was nice.

Mu Beta had prepared some sort of quiz which was downloaded to Beatrice's laptop and everybody bar me had a go at solving it. Which reminds me: B said Tilsit was in Germany, and I said it was in Poland, but admitted that I'm not any good sat geography. I looked it up now, and I wasn't far of the mark, as Tilsit is at least bang on the border between Poland and Russia, in East Prussia, Kaliningrad,. Which means, that all who put Germany are wrong, so the winners may not be the winners any more.

Conversations were flowing, as was the beer. Unfortunately, I was worried to miss the last train to Heathrow, so I left scandalously early. Had I known that the airport had closed down for the night as early as 10.30pm, I might have looked into other options of getting there. 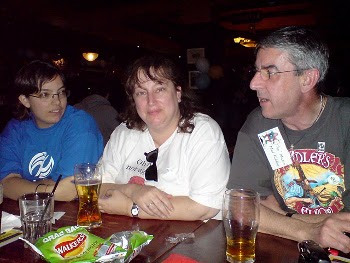 As it was, I spent a somehow uncomfortable night there, but I had internet access, so I chatted with friends here on hootoo and on fb, and when I had run out of coins to feed the machine, Fizzymouse called me and we chatted for a good hour on the phone. I really love this community, they're always there to help me, keep me company and cheer me up.

The flight back on Sunday morning was eventless. Poor Bea wasn't so lucky: Belfast airport is closed because of that volcanic ash coming from Iceland again. We'll try to keep her company on her long way back tomorrow on train and ferry. Still, going to a meet is worth any discomfort, and I'll go again if I can afford it.

Here are some meet photos

1I really hope I didn't forget anybody. If I did, shout up.2Funnily, both Todaymueller and loftskywalker were newbies whom I aced back then.