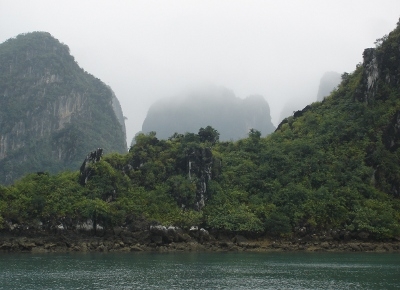 The clocks went back an hour a couple of days ago, but it didn't help much – I'm still pooped! There have been several ports since I last blogged, but none of them very exciting. Today is our second Vietnam stop, Halong Bay. This morning, we went out on a junk cruise around the bay. It is a World Heritage Site and the scenery is stunning. Lots of tiny islands of limestone and volcanic rock rising vertically out of the bay, like James Bond Island in Thailand. Several hundred metres high and maybe half as wide, carved into different shapes by the wind and the sea. 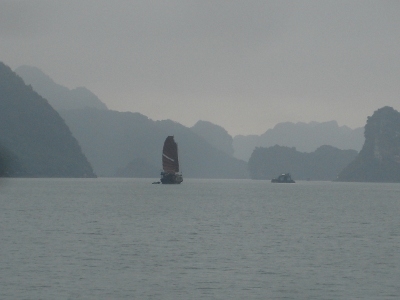 There was a heavy mist all morning, which kept things nice and cool (mid-20s Celsius), kept the waves to a minimum and also gave an air of mystery to the rocks as you couldn't see the tops of them. Quite magical. Unfortunately, the tour would have been just as magical in half the time. Four hours driving round in one big circle wears a little thin after a while! 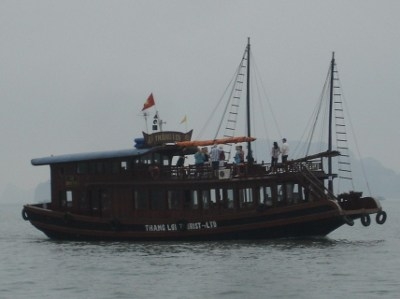 There was a woman on the boat selling handicrafts and t-shirts. She spoke no English whatsoever, but she was very sweet. And VERY persistent! I bought a t-shirt and a silk shirt, but I think I'll wash them before I use them. The smoke from the engine has probably deposited a fair amount of soot on them over time. (I feel gritty myself, and I was only on board for four hours!) I particularly liked the fact that once you'd bought something from her, she just assumed you'd buy anything! She came back with the most hideous stuff, including some plastic toy crabs that were downright creepy and a Duracell bunny toy banging on a drum (except white plastic rather than pink and fluffy). No thank you! There was also the fact that the engine fumes in the boat were so strong, I thought we'd be dead long before we got back to the ship! Surprisingly, the toilet on the junk was quite good. We'd been warned to expect 'basic' so I was pleasantly surprised to find not only a proper, flushing toilet, but toilet roll, running water, soap, the works. All that was lacking was something to dry your hands on, which in this humidity is vital. Well, that's what t-shirts are for, I guess! 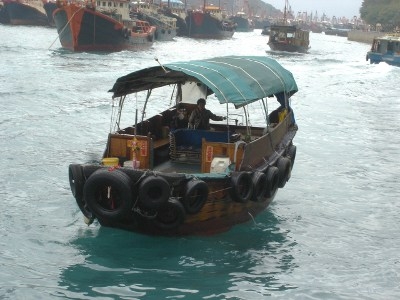 When we got back to the ship, we grabbed some lunch (not pleasant, best glossed over – not sure how you can get cold roast beef and coleslaw wrong, but still...) and then headed to the shore on a tender (lifeboats used for non-emergency purposes are tenders). We went to a local market that had some lovely stuff. Unfortunately, several of the stalls sold the same things, which got a little repetitive, but the people were lovely and their wares were beautiful. Mum and dad went back to the ship, intimidated by a sharp shower, and I carried on wandering on my own. I decided to walk back, but got distracted by a 4 star hotel called the Halong Dream Hotel. The logo was a smiley face. It would have been rude not to go in! Their interior designer was probably the person that designed the original Brent Cross shopping centre (Britain's first purpose-built mall) – all big white shiny tiles and large grey marble panels and the wall signs were brass with black writing. The picture on the men's loos was a silhouette of a man in a bowler hat and the ladies' had a woman's head wearing a sort of Ascot-suitable headpiece. I'm not sure how many milliners there are in Vietnam, and I must confess that on my several visits I have yet to see anyone wearing a bowler, but I suppose it's as good a differentiation as any! I used their (rather lovely) loos and their cheap internet connection and then they called a taxi for me so that I got back to the ship in style. I bumped into a mate back on board who said that walking back was a nightmare of beggars and hawkers, so I made the right choice. And it only cost 2 dollars!

Talking of harassment, nowhere in Vietnam is safe from beggars and hawkers. Even when we were out in the bay, on junks or tenders, there were beggars in small boats (sadly, mostly with small children on board) and other boats of people chasing our boats to try and sell us fruit or just stick their hands in the window and beg. One of the women begged while she rowed, while her two small children, probably no more than two and three years old, baled out the boat with their cups. It feels bad saying no all the time, but I can't afford to buy tonnes of stuff I don't need or want and have nowhere to put or keep it just because I feel bad. I can't afford, full stop. Of course, there is also the risk that once you give to one, they all come swarming after you. I watched someone make that mistake at the Pyramids at Giza once. He disappeared under a stampede of small children and was never seen again.

Factoid of the Day: Hanoi means Dragon Ascending and Halong means Dragon Descending. The myths goes that dragons protected the country in a war and then lay down in the water to protect the bay in the future (they're the rocks we saw). So there you go.