Real life is never far away on a cruise ship. It's not the isolated idyll that some holidays can be. On a ship, reality is always very close to hand, even when we're miles from land.

At about 11pm this evening, an announcement was made that we would be slowing down, so the movement of the ship may seem more pronounced. This was because we were responding to a mayday call as a sailor1 on a nearby yacht had gone overboard. We duly lowered our search and rescue boats (different to lifeboats as they are open so that people can be pulled in; lifeboats have roofs and doors). We're still looking.

It has now been three hours since we joined the search and although we are still following our search pattern, and the Portuguese coastguard boats and helicopters are also here, no one I have spoken to believes he can still be alive. Never mind the four metre swell. Think of the cold. Even if he was wearing a lifejacket to keep him afloat if he gets tired, the cold must be unbelievable and I personally doubt he'll survive, even if he is found. We have our medical team and all their equipment standing by at the door, defibrillators, the lot, should he be recovered, but, call me a cynical pessimist, I'm not hopeful. I'm happy to cross everything, along with everyone else, but the current air temperature is 12 degrees so I reckon the water is as near freezing as makes no difference. The crew are all doing what they can to help, peering over the side into the darkness, but it's a big ocean and one person is very small. It's pitch dark, of course. There's no ambient light whatsoever. Those of you who live in towns have probably very little idea of what true darkness looks like, but trust me, it's black. Of course, we're lit up like a Christmas tree, but that just pushes the darkness away by a couple of metres. After that, you can't see your own hand in front of your face. I'll offer up a prayer before I go to bed, and all we can do now is hope.

He died. They found him at about half three but he was dead on recovery.

But, despite the sadness, the cruise goes on, life goes on. 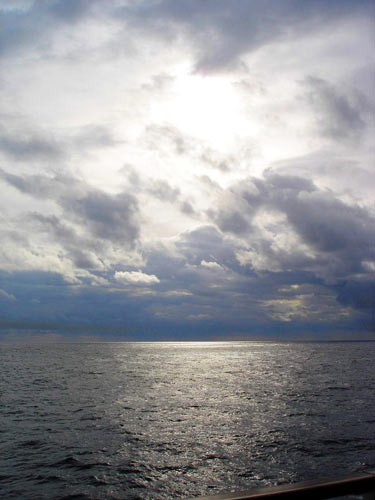 Personally, I have a cold and I feel rotten. If I could justify staying in bed all day under the duvet, I would, cos I feel like rubbish. My throat feels like someone has been sandpapering it while I slept. It's really very painful. In fact, I think I'll go and have a nap before my Spanish class.

This cold has really knocked me sideways. I couldn't walk a mile today. I was exhausted after one circuit, which is only a third of a mile. I thought about pushing it, but it's Barcelona tomorrow, so I should probably conserve my strength. It's only 10pm but I'm going to have an early night and hope I can sleep it off.

Still snowing in England, I see. You know you're in trouble when you make the top stories on CNN, the world's most America-centric news channel! Stay warm, my friends.

1His name was Richard Tapp.