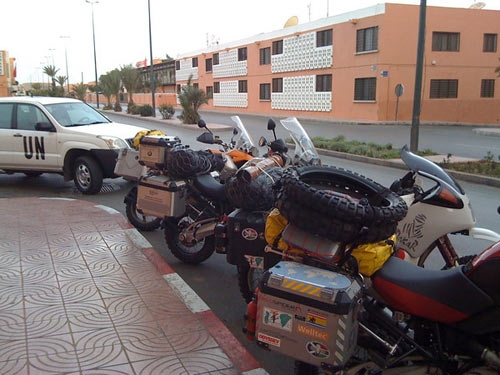 Once in possession of their Mauritania visa, the eight remaining riders had a couple of days ahead of them riding across the Sahara Desert. Dai described the scene for me in an email:

'Sahara is amazing and have taken some great photos, but at the same time it's constantly trying to kill you with high winds, drifting sand, wandering camels and mental truck drivers. Am down to my last 2 pairs of undies, no t shirts left and everything smells. If you could you bring me 200 regal out, that would be great.'

So surviving on limited supplies of clothing was bearable as long as you had enough cigarettes! Dai only smokes a particular brand, which isn't widely available outside Northern Ireland, and has never been seen in any duty-free shops I've encountered. This usually means he's about the only person who has to take cigs with him BEFORE going on holiday, rather than getting them duty-free en route.

And 8 became 7 as Andres said goodbye to the bunch: this was a planned move, as he has an artificial leg, and felt he didn't want to risk travelling long distances away from a major town. He stayed in northern Morocco and caught up with some old friends there.

With less than a week to go before my planned trip to The Gambia to meet them, I thought I'd better start on some packing. I dug out all my adventure clothes – mosquito resistant trousers from Craghoppers that had served me well in Egypt, Orlando and China. They still fitted, but for some reason my swimming costumes seem to have shrunk. A conversation with one of the other WAGS revealed that she had the same problem. Probably global warming, we concluded.

The Magnificent 7 continued south, and I know I wasn't the only one biting my nails as I watched their progress on the GPS spot locator. They'd have to complete formalities on the Western Sahara side of the border, then cross a stretch of no-mans-land, still containing mines, before battling with the Mauritanian border guards. I was very nervous as I saw the GPS signal leave the main road, and it turned out that Sid had been there before and thought he'd remembered the way. One bike fell in the soft sand, and when they were helping to pick it up they asked Sid where the truck marks had disappeared to. Ah, he said. Must have taken a wrong turn. Not exactly the sort of thing you want to hear crossing a minefield! They ploughed on, using their best off-road techniques, standing on the footpegs in order to lower centre of gravity. And reached the Mauritanian side of the border just as it was getting dark.

Originally they'd hoped to stay in a hotel in Nouadhibou, which had been recommended by a friend. But that would have meant riding 50 miles in the dark down a peninsula, which they'd have to come back up again the next morning. Instead, they decided to camp with a group of other travellers and aim to cross first thing in the morning.

They rose at 5 am and marvelled at the stars visible in the sky, before launching into the border crossing. That actually went quite smoothly, and they made good time down to the capital, Noakchott. There, they hired a taxi to lead them to a hotel, which was protected by six burly security guards. An English speaking police liaison officer caught up with them and warned them to tell no-one of their plans. Mauritania is still rated by the Foreign and Commonwealth Office as "do not travel", and it was this risk that had prompted them to get hold of the GPS spot locator beacons in the first place. They seemed a little confused as to what time it was, heure locale. I'd thought they were the same time zone as the UK, but when they asked a local, he'd said an hour ahead. This probably explains why the staff were only setting the tables in the restaurant they went to for dinner, and why the hotel staff seemed unprepared for them at breakfast time.

The next day was an attempt to leave Mauritania. The major crossing point at Rosso was notorious as one of the most corrupt border crossings in Africa, so they were aiming for the river crossing at Diama. This was not without incident either, and they had a stand-off with one guard who demanded 70 euros to cross the bridge, which they refused to pay. But they finally made it into Senegal, and to the
Zebrabar, a well-known stop-off point for travellers. A couple of rest days there, and then a couple more days riding, and they'd reach their destination at last.

And by the time you read this, I'll be there myself, all being well, having exchanged the grey January skies of Belfast for the winter sun of the Kololi Beach resort in The Gambia. So I really should stop writing and get packing…