25 Ways to Torture Your Roommate At Christmas

Turkeys will thaw in the morning, then warm in the oven to an afternoon high near 190F. The kitchen will turn hot and humid, and if you bother the cook, be ready for a severe squall or cold shoulder.

During the late afternoon and evening, the cold front of a knife will slice through the turkey, causing an accumulation of one to two inches on plates. Mashed potatoes will drift across one side while cranberry sauce creates slippery spots on the other. Please pass the gravy.

A weight watch and indigestion warning have been issued for the entire area, with increased stuffiness around the beltway. During the evening, the turkey will diminish and taper off to leftovers, dropping to a low of 34F in the refrigerator.

Looking ahead to Boxing Day and the New Year, high pressure to eat sandwiches will be established. Flurries of leftovers can be expected with a 50 percent chance of scattered soup late in the day. We expect
a warming trend where soup develops. By early next year, eating pressure will be low as the only wish left after Christmas will be the bone.

I hate to be the one to defy sacred myth, but I believe he's a she.

Think about it. Christmas is a big, organized, warm, fuzzy, nurturing social deal, and I have a tough time believing a guy could possibly pull it all off!

For starters, the vast majority of men don't even think about selecting gifts until Christmas Eve. It's as if they are all frozen in some kind of Ebenezerian Time Warp until 3 p.m. on Dec. 24th, when they - with amazing calm - call other errant men and plan for a last-minute shopping spree.

Once at the shops, they always seem surprised to find only Ronco
products, socket wrench sets and mood rings left on the shelves. (You
might think this would send them into a fit of panic and guilt, but my
husband tells me it's an enormous relief because it lessens the 11th-hour decision-making burden.) On this count alone, I'm convinced Father Christmas is a woman.

Surely, if he were a man, everyone in the universe would wake up
Christmas morning to find a rotating musical Chia Pet under the tree,
still in the bag. 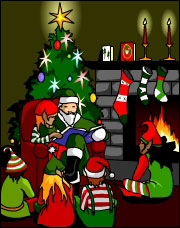 Another problem for a he-Santa would be getting there. First of all, there would be no reindeer because they would all be dead, gutted, and strapped on to the rear bumper of the sleigh, amid wide-eyed, desperate claims that buck season had been extended. Blitzen's rack would already be on the way to the taxidermist.

Even if the male Santa did have reindeer, he'd still have transportation problems because he would inevitably get lost in the snow and clouds, and then refuse to stop and ask for directions.

Add to this the fact that there would be unavoidable delays in the
chimney, where the Bob Vila-like Santa would stop to inspect and repoint bricks in the flue. He would also need to check for carbon monoxide fumes in every gas fireplace, and get under every Christmas tree that is crooked to straighten it to a perfectly upright 90-degree angle.

Other reasons why Santa can't possibly be a man:

I can buy the fact that other mythical holiday characters are men.
Father Time shows up once a year unshaven and looking ominous. Definite guy. Cupid flies around carrying weapons. Uncle Sam is a politician who likes to point fingers. Any one of these individuals could pass the testosterone screening test. But not St. Nick. Not a chance.