Our late night flight from Shanghai brings us to Huangshan, and we arrive at our hotel at about 11 pm, and take a walk by the river. There are no bars, but plenty of massage parlours and an internet café with about 50 people in it. In the morning, people are doing their washing in the river. My camcorder stops working, complaining of the humidity

, and I hope that this is only a temporary fit of uncooperativeness. We have a failed search for bottled water, ending up hot and sticky on the coach, having just bought water at the hotel shop at a not too outrageous price. 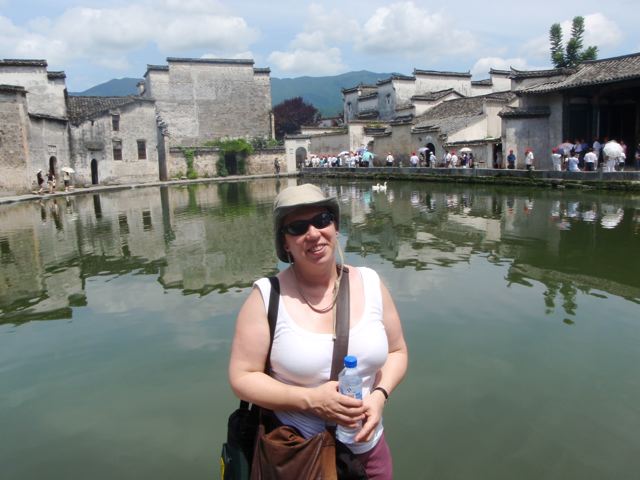 We head to Hongcun, the village used in the filming of Crouching Tiger, Hidden Dragon. The heat is oppressive, and I can feel that I am burning. Sadly, the village didn't move me greatly, nor did local tour guide Dean's rather minimalist guiding, which consisted of a vague wave of the arm and 'it's over there'. We have a search for the much talked-about opium room in the 200 year old businessman's house, and then have a typical lunch in a family style house, where the highlight is the bacon and potato stew. Dean has disappeared again, so we have a rather hot traipse around trying to find our way back to the car park. We make a quick stop at a 'supermarket' (two shelves of goods, no fruit) to stock up on beer and biscuits, as the food at the hotel on Yellow Mountain is supposedly not so good. The bus begins its journey (passing several other much larger shops), and starts negotiating what seems like 100 hairpin bends as we rise high up into the mountains, with some stunning scenery. Just as well, as it keeps our eyes off the road and the hair-rising overtaking at speed around corners, ignoring solid white lines, which is going on. We take a cable car up the mountain, and gasp at the beauty.

No-one had briefed us properly about the strenuous walk required between cable car and hotel (although we should have guessed from the porters offering to carry bags to hotel for about £4, or carry passengers there in a sedan chair for about £40.) I guess it was about two miles long, a distance I can jog on the flat, and at sea level, in trainers, in about half an hour. So asking a group of more mature people at altitude, carrying their overnight cases up and down many steps, to do it in a hour was a tall order!

At the top of Beginning to Believe peak, I use my modest selection of Mandarin phrases in an exchange with a Chinese gentleman.

Him: (indicating the view) Very good!

Him: You are English?

Me: Wo shi Eirlanren(I am Irish.)

And then a Dzaijan after leaving the peak.

Yes, How High was that Chinaman.

It was certainly a long and tiring walk, but the views of the mountain were nothing short of stunning. And I know I've completely over-used that word when describing China, but these views did literally cause me to stop and stare, open-mouthed. 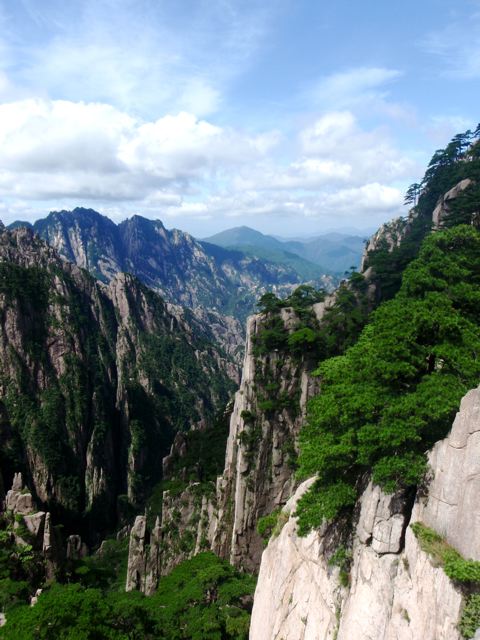 My shoulders were sunburnt, and I hadn't packed any after-sun in my little overnight bag. But after all the fuss about the hotel not being very well equipped, I discover that they had gin and tonic and lemons, so the sunburned shoulders are soon forgotten. There's even a small internet room in the hotel, although since Dai's been Twittering in the cable car on the way here, and I've had no trouble texting people back home, we manage to resist the lure. The food is fine— again, mumblings about lack of info from Dean.

Our hotel has lovely views from an outdoor terrace, but it is very warm as aircon isn't considered necessary in the mountains. It is also very noisy: there's a hostel just below us, and the young people chat and sing and play until the wee small hours, when they are gathered and given a speech at 3.30 am (I suspect en route to see the sunrise, as they were running round the hotel in puffy coats and waving torches when we got up at 4.30 to see it). It certainly was a beautiful sight, and quite rightly on the list of 'must-do's for this location. Back at the hotel, I collapse into an exhausted sleep, waking at 8 am. After breakfast, we set off walking, ostensibly 'guided' by Dean, but in reality left to ourselves to marvel at the dizzying cliffs and plunging valley of the West Gorge. 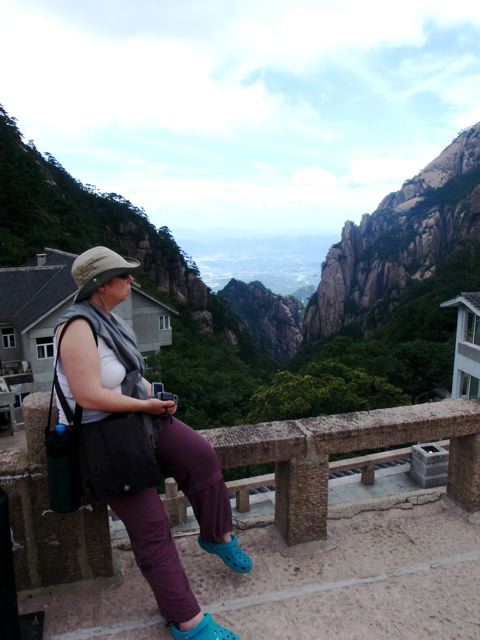 Lunch at the Bai Lai hotel is great, and I managed to sit by Marco the vegetarian and share his rather superb mushrooms— I suspect that ours was not in fact the best hotel on the mountain, as Lily had claimed. But maybe it was the only one with bathtubs, which perhaps previous tour members had expressed a need for.

After the cable car ride back down the mountain, we endure a long drive back to Huangshan town, punctuated by a stop at an ink stone museum, sorry, shopping opporchancity.

The afternoon is rounded off with a walk down Old Street, a 500m stretch of restored Ming shops selling medicinal herbs, wood carvings and local teas, which we are able to enjoy tasting; the perfect way to relax after our hot and strenuous previous 24 hours or so.

I manage to order a bottle of wine to accompany dinner, with difficulty. The Chinese don't drink wine as a rule with meals, as it doesn't go with the balance of tastes, yin and yang etc. Especially red wine, which is very acidic and tannic. But they do produce some lovely wines themselves. Then we join a few of our group for a bit of blather and chat at the bar, with an out of tune piano that only plays four tunes.

We have a bit of a panic after breakfast the next day: Dai has gone off to find a bank (since the hotel wouldn't change travellers cheques), and wasn't going to be able to make it back before 9 o'clock, when the bus is due to leave. The hotel staff accuse me of a missing towel, and so I'm frantically searching our hand luggage in case Dai has put a towel there, whilst everyone else is waiting on the bus and the time ticks on. My protestations of innocence are not helped by me producing a towel from the hotel in Shanghai! (I told him not to do that, but would he listen?) Severe embarrassment and much furious texting to Dai, but eventually we are free to go, before they get to the stage of demanding we take our big cases off the bus to be searched. We manage to stop for 10 milliseconds on the busy main road to pick up Dai who has succeeded after several attempts in finding the right bank to cash the cheques, and who heroically dashes through the honking traffic to board the bus.

In Shexian we see an example of an old clan house, made of wood with no nails, painted beams, and the seven ornamental memorial Tangyue arches commemorating filial duty. We have lunch by a lake and some free time to explore a beautiful garden, which sadly I miss Dean's telling us to go see, and so my visit is very short. Then, as our coach is giving problems, we transfer to a smaller and less air conditioned one for the three hour trip to Hangzhou, which wasn't the most comfortable of journeys. As we unfold like pieces of origami at the other end, I mistakenly leave my lovely Shanghai Museum umbrella on the bus.