About 24 hours ago , I logged on to the net and an ICQ message popped up 'Douglas died yesterday'... my reply was 'oh s**t'.The message was from someone who DNA unwittingly introduced me to, and whom I hold as a close friend even though on the opposite side of the globe.


In the early 80's and in my late 20's ABC TV in Australia aired a 30 minute episode series 'Hitchhikers Guide to the Galaxy'; I had a Beta video recorder and a friend had a VHS. We both taped the daily episodes and on Sunday mornings I lugged my Beta to his place and we spliced the episodes to make a movie , cutting out the overlaps. Whilst tapes were rolling we drank beer and read the books (unfortunately I missed the radio series).

Over the years I re-read the Hitchhikers trilogy and read the Dirk Gently's then, when I bought my computer in 1997 , I bought a few computer games; one in early 1998 was Starship Titanic... the reason I bought it was only because of DNA.

I enjoyed the game but I got stuck occasionally so, like many before and after me, I went to the official site for hints. The people (players) who frequented these forums seemed to be just ordinary people who were fans of DNA. So I stayed for a while. I normally logging on at my time 9pm (midday in England) and, after a couple of days, found the same people online at the same time. A bloke in Australia in a place called Byron Bay, a girl in a suburb of Sydney, a lady who worked at a hospital in London and, for half an hour every night/day, two 13yo girls who in their lunchtime would have a whilwind visit, posting in every forum at a million miles an hour, then disappearing as quickly as they came. There was also a lady from Missouri and occasionally her daughter plus a schoolgirl from Sydney as well.

Others too popped in and out, but cyber friendships were made. The three Aussies; me, bloke from Byron Bay (let's call him B) and the girl from Sydney (E) met for a drink. B liked E, E liked B and B moved to Sydney. They are two people who's lives DNA has changed. When DNA was in Sydney about 2 years ago we all attended his talk and I gave DNA at the end a picture of me, B, E ,the Sydney schoolgirl and DNA sitting in the captains lounge... a montage created exquisitely by B. 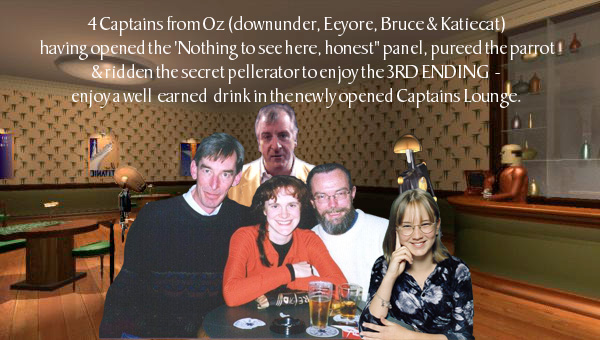 Later on that year I went to England and, whilst in London, the lady from the hospital (let's call her P) took the time to show me around London. We had lunch in a pub of course, she showed me around town; Soho, Harrods, Buckingham Palace etc. We actually walked past TDV's office (Douglas' company) and had a couple more beers then parted at the tube, her off home, me jetlagged and semi drunk to find my way to my hotel. That lady and I have shared a lot over the years on the net, like the day her son started high school and caught the wrong train, so she had to leave work and retrieve him. She told me one day (actually night here) that DNA had started a new site h2g2 and I rushed to register, but she was the one that got in first and she was so proud when she won an autographed copy of the illustrated guide from DNA. (I have a picture on my computer here somewhere of Douglas putting it into an envelope addressed to her). She loved DNA's works and the man himself so much that she messaged me one day that she was negotiating to work at TDV! I was rapted. A friend of mine actually working for the man. She got the job of course and is now working here at BBC on h2g2. Her life has definitely changed because of Douglas.

On that same trip to England I popped into a small town in Norfolk for a cup of tea with another Starship Titanic player and her husband and stayed overnight in a pub near Bedford owned by the father of one of those whirlwind posting 13 year olds from the starship forums.

Back in Australia I often went to DNA's sites , starshiptitanic , starlight lines forum , douglasadams (I enjoyed the quizzes in community fora and the many more friends I met there). I have 32 people on my ICQ list which includes my mother, both sisters, my boss... but 17 others all from DNA's sites.

These people are friends, real friends, friends that DNA introduced me to through his works.

Douglas, again, thanks for everything.

To Jane and Polly: my heart goes out to you.

To P, B, E and friends , lets raise our glasses and salute DNA.