A few weeks ago I went to an evening of entertainment called 'A Different Dance Hall' at my local stomping ground Het Kasteel.

There's nothing unusual in that of course. Any of you who have read about the Dutch Meet or chatted with me at any time, know only too well that I am a volunteer there, as is my TowelMaster and all the Dutch h2g2 continguency!

What made this event slightly more special was the fact that TowelMaster's band 'Solid Air' were finally getting their break and performing in the main hall for the first time. They had appeared a couple of times before in the 'cafe' or small bar, but not as a crowd-puller hoping to fill the venue with punters. The band consists of Kidvic on guitar and mouth organ, TM on synths and vocals, Marz on Acc/midi bass and Wally on Electric Drums and vocals.

The afternoon was mainly given over to the band setting up and 'doing a sound check'. This was not particularly one of the most entertaining ways I had ever spent an early Friday night, but I had been asked to take photographs of their debut by one of the other band members on his digital camera, so needed to attend for instruction. No entry in the guide for how to use one of those yet I notice... I could have definitely done with some help!

The actual 'party' kicked off with DJ's Sander and Adger playing a mix of dance music... don't ask me to elaborate as I always mix up the various genres, suffice it to say that they did a good job of encouraging a dance mood.

I adjourned to the cafe to worry and fiddle about with the camera... would I remember how to operate the thing and would I be able to take the artistic shots Marz seemed confident that I could produce. At around midnight the band were finally in postition ready to play. For this special night the DJ's had comandeered the stage instead of hiding behind the usual DJ screen, so room for the band was somewhat restricted.

The opening number was 'Touch the Sun', probably my favourite SA track at this time. It opens with a very evocative slow intro and soon pumps up into a full-blown dance piece. This was followed by 'Gonzo Radio' with Wally enjoying playing around with his special effects during the opening and end of the song. It certainly got the crowd dancing, although I was too busy trying to negotiate around cables and bodies to take pictures at the time to be able to join in. 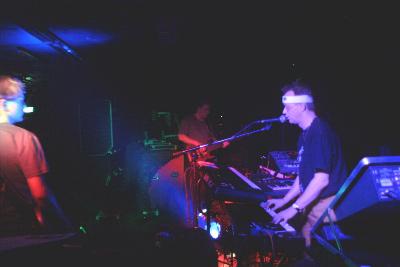 Next came Opium... I had pointed out to TM that the words 'I've been watching you' sounded more like 'I've been washing you' on previous occasions... I'm glad to report that it sounded just right this time! This is a much slower song, so there was a fair amount of wavering on the part of the dancers, creating a scene not unlike an eastern belly-dancing convention.

The next two items rely quite heavily on special effects . 'Drum and Bass' starts almost as a jazz number, with Marz enjoying experimentation on his bass, but quickly builds up to another slowish dance number, whereas 'Planet Dub' features Wally on vocals and some interesting syncopation and echo effects.

Then came their classic number. Anyone who has even remotely come into contact with the Het Kasteel crowd know the most over-used quote from 'Chlorophyl'... It's green... you know what I mean1?! This was, as always, a popular piece, although, for some reason, they don't find it quite as funny as I do... can't think why!

The tempo upped again, with 'Electric People' followed by '0-900 Coffee Shop' and 'Cutting Edge', both very much in the reggae mould.

By this time I had almost come to the end of the film in the digital camera, so I asked Arutha, who was in charge of lighting, to give the red ones a bit of a rest. This worked quite well for the next song 'Black' and I managed to take a few decent pictures at last... there must be an easier way to become a photographer!

The mood slowed down for 'Who you gonna turn to' sung by TM... may I say very well indeed2, which led into the final number 'Urbicide' another upbeat number which went down a storm with the writhers on the dance floor.

All in all, despite the trauma of trying to work an alien piece of equipment, I thoroughly enjoyed the night, as did all the attendees and the members of the band, which is always a good sign. For those of you interested (or brave enough), you can actually read more about the band and listen to their music on MP3 if you visit braineye, the home of Solid Air and other Dutch bands!

1We ARE talking about Holland after all!2A totally biased opinion for which the editor apologises!