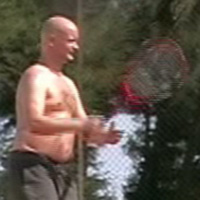 I've never been the best at small talk, preferring to get straight down to the wildly drunken fighting talk as soon as possible, but even for me it was a pretty poor opening gambit.

'So, do you play tennis often, Alex?'

It turned out that this was like asking Jamie Oliver if he cooks once in a while, or asking a banker if he's ever received an unjustified bonus. Tennis, it turns out, is Alex's bread and butter.

'Yes, every day. I am a professional, you know' he replied, with not a trace of immodesty in his voice. 'I have represented Gambia a few times and, you know, I come to the UK during the wet season to play in tournaments.'

Of course, when Alex mentions the 'wet season', he's referring to those few months of the year when The Gambia doesn't lie under a glorious blue sky, and not the first week of Wimbledon. But it's not that little phrase that disturbs me; it's the fact that he just referred to himself as a 'professional'. I might have guessed from the way he's always pumping weights I can't even lift in the mini-gym near our bedroom. The smallest of his muscles is larger than every muscle in my body; his fingers could probably give my thighs a run for their money. He isn't very tall, but has a poise and confidence that suggest he could do the 100m in 10 seconds flat after running a half-marathon along the beach. In his early 20s, he walks with a swagger that comes from overinflated groin muscles rather than arrogance. In short: he's an athlete; a proper one who's represented his country at his chosen sport. The clues were all there. The little badge giving his name above the words 'Tennis Coach' was a bit of a clue, in hindsight.

I need not make any comparison with the fella walking alongside him, who waddles along scratching his oversized bottom wondering what on earth possessed him to suggest this.

Lainey and I had spent an hour or so the previous day knocking tennis balls backwards and forwards across the court. She is not a tennis player, and won't mind me telling you so. We gamely knocked the ball backwards and forwards, looping the ball high in the air so it was easy to hit, and had great fun, but something was missing for me. I found it hard to control the urge to smash the ball back past her and to reign in my desire to slide powerful drives down the line, but it's very rude to have your fiancée scampering all over the court when there's a bit of a gulf in your respective abilities. Had our skills been reversed, I think I'd have resented being her ball-boy.

So I'd had the idea of hiring the hotel's tennis coach for an hour, just to have a knock-around with a more talented opponent. At less than a fiver, it was great value, but I made the mistake of presuming that the 'tennis coach' would just be a lad who liked tennis rather than a Gambian international.

I shouldn't have been too worried. Alex went quite easy on me, using the first ten minutes to work out my level of skill by hitting to my forehand and encouraging me to spread the play as best I could. However, there was quite a strong wind at my back, so most of my shots went too long or, when I tried to compensate by hitting more gently, went straight into the next. The exception was a mis-hit return that held up in the wind and dropped right on the side-line well out of Alex's reach; he generously described the fluke as a 'professional shot' and suggested we changed ends.

Alex was full of excellent advice, telling me to bring the racquet back really early and hit the ball in front of me rather than to the side, and it turned out I was even holding the racquet wrongly. He shouted guidance from the other end, most of which got lost in the wind, and to my surprise I began to improve. I started to hit the ball more crisply, cleanly and powerfully, and was able to hit the ball with a lower trajectory over the net. This was becoming fun. However, I started to notice how easily Alex was able to return each ball; a step or two to the left and he was on to it, effortlessly knocking the ball back to land in front of me with precision. Most people I've ever played with are drawn in to wide balls and are only just able to return them, leaving the court open for me to smash or drop the ball into, but Alex wasn't so easily dealt with.

What was most astonishing was his economy of effort. He knew instinctively where the next ball was going and was usually able to deal with it after a simple step and swoop, and would invariably be back in position before the ball had even reached the net. By our first break for water, he'd barely broken sweat while I was panting and dripping like a pervert in Stringfellow's.

Good grief. Be perfect. Simple as that, eh?

And then my moment came. During a long rally, I noticed Alex coming in towards the net, as he liked to when he wanted a bit of fun or to test me out. As he did so, I realised that he'd just smash a flat return back past me, so I scooped the ball into the air, aiming to lift it over his head and onto the baseline.

Time slowed. Alex's run for the net turned into a slow jog, and we turned to join me in watching the progress of the ball. It flew high in the air, but it was long. Just too long.

Then the wind caught it; the ball held up for a moment and started to fall. Now it was close. And with Alex stranded at the net, it caught the baseline and bounced happily into the fence beyond. I'd genuinely beaten him with a cracking shot.

And just to prove it wasn't a fluke, I hammered a ball across the court in front of him a few rallies later. This time, I dreamed I heard a smattering of applause from somewhere behind and above me. Alex grinned at me; his pupil had started scoring As at last.

Alex turned up the heat a couple of notches following that shot, and although I was hitting powerfully and accurately he had an answer to everything. He was exhausting to play against, but I was relishing the challenge, and I'd beaten him a few times in the hour we were on court together. On the final ball, I played the shot of the day; a sprint to a long ball, remembering to bring the racquet back early, adjust my balance, take it early and hammer it back down the line at pace. It was unstoppable, and Alex was generous enough to shake my hand before retrieving the ball. I'd managed to play for an hour against an international professional without looking like a complete fool, and I was ecstatic.

An hour and a shower later, Lainey and I sat and drank a couple of pre-dinner cocktails by the hotel swimming pool. An amiable north Londoner who I'd met earlier in the day came over and slapped me rather painfully on my sunburnt back.

'Gave 'im a bleedin' run fer 'is money, eh? You dun awright. Fair play; he was in trouble with that cross-court hammering. Dahn up like a kippa. Firty degrees, I reckon, an' you never let 'im off the 'ook.
You'll do awright, sunshine; you'll do awright.'

There will always be an England.