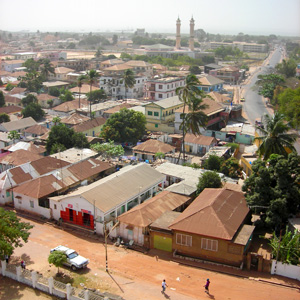 
The biggest irritation for tourists in The Gambia is the touts. Anywhere you go around the Kombos, you'll be invited into shops and restaurants (and, occasionally, into back rooms for a little 'Bob Marley'); harassed by taxi drivers; offered tours and trips; be ripped-off, scammed and over-charged (sometimes all at once); given 'preferential rates' for your money changing; asked for help, 'donations' or sweets and generally have your reserves of patience sapped every time you leave your hotel1. The techniques are many and varied, and the themes fairly easy to spot.

Most of the time, these attempts at parting the rich fool with his money are good-humoured and are nothing to worry about. Once you have the knack of being firm but friendly, persuading the touts that there are easier marks around is a doddle. Very occasionally, though, there is a more threatening undercurrent.

We've dealt with touts hundreds of times, and only once has the situation started to get out of control. It was on our first visit to The Gambia, and we wanted to get around and see some sights on our own. We took a taxi to Arch 22, the monument built to commemorate the President's election and to massage his ego, studied the cityscape for a while, then headed down the main street towards the city centre.

Campaigning for local elections was in full flow; never a good sign for the traveller. Every few hundred yards, a rally was taking place, and occasionally a young man would peel off the crowds and come to talk to us. We knew this would happen and that we'd be offered a guided tour, sometimes indirectly, and although some of our 'friends' were more tenacious than others it was only a matter of time before they got bored or realised that we weren't going to give them any money, and wandered off. Our experience of travelling elsewhere in the world was paying off, and although the attention was irksome it was as troubling as a fly buzzing around an elephant's tail.

Of course, I wouldn't be telling you this if that wasn't about to change. We were standing watching a rally in a local schoolyard, talking to one of the politician's campaign assistants and wondering if we could blag a souvenir T-shirt, when a leech latched onto us.

He was about 30 but looked older, unshaven and with milky eyes that suggested he might have something of a drug habit. He started with the usual opening gambits, introducing himself and asking where we were from, before claiming that he wasn't interested in money but simply wanted to practice his English. This seemed unlikely in the extreme, and we let him know in no uncertain terms that we didn't want his company, didn't need a guide, didn't have any money to pay for his 'services', didn't want to talk to to him and did want him to bugger off and leave us in peace. This didn't work, so we then ignored everything else he said, pointedly turning our backs on him every time he spoke.

Normally, at this stage, the tout gives up totally, realising he's wasting his time, and disappears. Our man was special. He ignored the fact that we were ignoring him, and carried on acting as if he were our guide. He pointed out landmarks of dubious interest, suggested different directions we could walk in, asked us more questions about our lives. If I asked Lainey if she was thirsty, he'd point out a place where we could get a drink; infuriating, because it meant we could rarely do anything we'd mentioned to one another for fear of encouraging him. For our part, we ignored and were angry with him in turns, growing exasperated in the heat, and even sat down for a while hoping he'd get bored and go. But he was nothing if not persistent. At Albert Market, he even began haggling with a shopkeeper over a trinket I'd pointed out to Lainey with a smile; we used the opportunity to scarper, but unfortunately our skin gave us away and we were caught once more.

We sat on a hot dusty street in an intractable situation. He wasn't going to leave us alone, and, more to the point, wanted paying for his time. Maybe he saw us as easy marks, or genuinely felt that he'd provided a service that was worthy of recompense. We were browbeaten, bullied and tired, and had no desire to pay him for ruining our day. But we knew now that we had to reach a compromise; his posturing became more agitated and aggressive, and the traders around had little interest in intervening in what must have appeared to be a simple dispute between tourists and guide. I made him an offer, a small sum but more than adequate given the circumstances, and he refused to take the note from my hand. I suggested he take it or leave it, and we got up and walked back towards the relative safety of the main street. He circled us, jabbing his finger at me and making sudden aggressive moves towards me. I calmly held the note out for him to take with my left hand, my right fist clenched in my pocket just in case. We approached the main street, and with every few steps he grew more agitated. A fight was inevitable now, but I figured we'd be in a better position with people around. If he had a knife, a crowd might just stop him from using it.

We got to the main street at last, and things finally came to a head as he barged into my shoulder outside a photo shop opposite the Presidential palace. Now my bag was on the floor at Lainey's feet, and he danced backwards as I took a stride towards him. I knew if he threw the first punch it would be wild, and a good one from me would floor him. By then, someone would notice and step in. He was raging now, and I prepared myself.

Then a huge man strode down the steps of the photo shop and put himself between us. Dressed in full ceremonial robes, he spoke calmly but firmly to our 'guide', nodded at me and took the note from my hand, then gave it to the guide and shooed him away. He nodded at us again, and left; a strange kind of guardian angel indeed.

The guide followed us up the street like some kind of personal Smeagol, but we jumped in a taxi and were gone; a little shaken, but safe.

We went back to Banjul this year. We took one of our friends from the beach as a guide.

1In fact, leaving your hotel isn't necessary for this; we were asked quite baldy at breakfast one day if we wanted to buy a bag of rice in order to go and see the waiter's family. We think he was new.