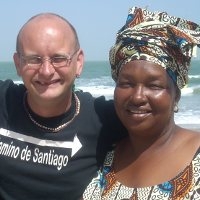 If there's one thing that Gambians seem to have a born talent for, it's remembering faces. Tourists often make the mistake of telling market-stall holders that they'll have a look in their shop tomorrow ('I don't have time today' or 'I have no money today'), and the following day will be pestered into buying something (the best tip I can possibly give you in this respect is to simply be honest 'I'm not going to look at your wood-carvings because I don't like them' is brutal but fair, and is more likely to raise a smile and a handshake than an out-and-out lie). We walked to the beach via the supermarket – a trip of around 300m – and met around a dozen people who recognised us from the year before (and, in a couple of cases, the year before that) despite never actually having any dealings with them at all. When we got to the beach, it was like a big family reunion.

We knew that as soon as Bob saw us the whole of Kotu would know within minutes. Word travels fast, particularly when Bob is carrying it. We expected to see our fruit-selling friends first, but they weren't there, and while we looked for people we knew Fatima ran up behind us.

'I was praying' she breathlessly explained, pointing back at the mini-mosque beside the market, 'and then I saw you and had to pray and come quickly!'

Fatima is wonderful, and the first person we met in The Gambia. She cuts up huge plates of fruit on the beach and is single-handedly responsible for my average of five portions a day across a calendar year. When I say she's wonderful, I'm not giving my opinion; any widow who can support a family of eight on the proceeds of a fruit-selling business run from a small shack she shares with twenty other identical fruit-selling businesses is worthy of the word. And she's warm-hearted, cheerful and humble to the point where you don't so much as want to buy her a soft drink for fear she'll implode with embarrassment. The first mattress she slept on in her life was the one we bought her two years ago; yet when we came back from a two-day trip last year and became her first customers in three days – for which she earned a princely £5 gross – she instantly gave half of it to her friend, 'because, you know, they are very poor'.

We all held hands and walked along the beach, talking in that peculiar Gambian way:


'She is very young. I'm happy that she is fine. Remember her to me.'

And so we go on. I could talk to Fatima like this for hours, and often do.

It's only a few yards before I'm spotted by one of the boys. Halfway between the hotel and the fruit stand is a row of half a dozen juice bars, each run by a young Gambian making fruit juice to order. We tend to share our business between two of them; Karl Marx, a young, hip rasta with a half-moon smile and a laugh to match, and Solomon, a quieter, more reflective guy who likes nothing more than to discuss the world he sees. They are good company, particularly together when their ying and yang are most obvious. The juice bars make a natural meeting place on this part of the beach, and just behind there is usually a pot of attaya on the go for the cast of lifeguards, army corporals and bumsters that stop for a chat during the day. It's also where I learned to brew, and a small glass of attaya is thrust into my hand with an apologetic smile and shrug: 'second brew'1. I laugh, surprised that they remembered this small detail, and soon we're all overwhelmed with laughs and hugs and 'welcome back's.

We're given the best seats they have and tuck into some glasses of freshly-squeezed juice and plates of fruit and talk about the last 13 months. More attaya, more laughs and more handshakes as some of the other characters from last year come and go. We get a few touts, too, and dispatch them in a firm but friendly manner. The boys laugh. 'Maybe next year we give you a Gambian passport?' Solomon grins.

1The first brew is strong and generally drunk by the men, the second is weaker and sweeter and usually for the women, and the third and final, very sweet and rather week, is for children and toubabs.