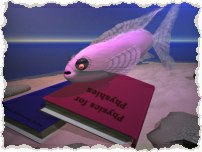 I remember watching a film a few years ago, about Einstein playing matchmaker between his genius of a niece, and a car mechanic he becomes friendly with. The film starred Meg Ryan and Tim Robbins and, according to both Halliwell's Film Guide 2000 and Videohound's Golden Movie Retriever 2000 is called IQ.

It's not a very memorable film (despite the presence of Walter Matthau), and Meg Ryan tends to annoy me, but one scene has always stuck in my mind. It shows an experiment being performed on a man, in order to see the results of keeping him in a small room, with no way of telling what time it is. He's going (rather loudly) insane.

Our common room almost exactly resembles the room he is kept in. In fact, it has a rather frightening resemblance to the experiment itself... time actually ceases to have any meaning once you step inside. Whole periods can fly past in no time, and no one ever seems to notice that it's time they were in class...

This wasn't always the arrangement. Once upon a time, we actually had a common room large enough to fit in the whole of the sixth year.

Fun fact to know and tell number one:

Our school backs onto the town's recreation centre (commonly known as the reccie).

So, since the school's hall is fairly small, we use the reccie for PE. And, up until the year before last, there was a room provided for the 6th year to use as a common room. Then, without warning, the local college invaded, and we lost our common room to a block of computers and some evening classes.

The school, being the generous establishment it is, built us a new common room. We'd be lucky to fit half of the year in it.

The sheer force of a collective evil stare from a group of 17 year olds is strong enough to cause a person's head to explode.

So, the fact that the common room has been overtaken by the hard side of the in-crowd basically means that the Freaks and Geeks (or, in slightly more general terms, anyone with an IQ that isn't in decimal points), can't get in. The school's next great idea was, instead of giving us our own place in the reccie, they'd just let us use the lounge. The public lounge.

I've known this fact for a long time... I think possibly it was passed down to me down the placenta, along with food, oxygen, and the automatic knowledge of Beatles lyrics. What I didn't know, however, was that they're also territorial... and we've invaded. The feeling of resentment every time one of them sees us in there is so thick you'd need a chainsaw just to make a dent in it. Of course, resentment works two ways... but you'd be working out a plot to rid the world of PE teachers too, if they chucked you out of the one place you can go to spend your time constructively learning new card games and building up a respectable caffeine addiction. As if social dancing wasn't reason enough...

It's not as if we can retreat to the other common room (unless you particularly enjoy having your self-esteem ripped to shreds). There's always the library, of course, but the librarians have a strange aversion to us playing cards. Though, the fact that we've just discovered multiple player Spit (a fast, very loud card game) probably means they're justified. In retrospect, the seven side game last Friday wasn't the best idea in the world...

What usually happens, after having been chucked out of the common room (and forced away from the coffee machine... causing serious withdrawal symptoms in at least half of us...), is that we end up at the bottom of the new building (our school consisting of two buildings, one older, one new... imaginatively known as 'the old building' and 'the new building'), sitting on the benches trying to play cards. To do this requires the ability to bend your body in two, and twist it around itself, whilst still keeping enough wits about you to cheat as much as possible. Fortunately, being numb from the cold, no-one can actually feel any pain...

Really, our school is very much against 6th year spending any free time in the lounge, or the common room. In fact, they're pretty much against free periods, but given that the whole year was halfway through arranging to leave for college last time the rumour about abolishing free periods went round, I doubt there's much they can do about it. Save for making sure we don't have a real common room, of course. Not that it's really worked out for them... all it's accomplished is a division in the year. We've got the group in the lounge, and the lot in the common room, and never the two shall meet. Unless the next change is to give us a matchbox as a common room. Then I suspect we'd all meet in the Rector's office. How much damage do you think you can do with 30 prefect badges?