By Appointment to the Royal Court of Balwyniti

His Majesty King Cthulhu of Balwyniti has graciously bestowed His Royal Warrant upon The Society. We will do our utmost to live up to the high standards of procrastination that this honour demands.

Since I seem to find it increasingly harder to get around to welcoming everyone to this society, particularly if I leave it for a while and the numbers start to pile up, everyone who wants to join may take this as the welcome message and make their way straight to The Palace Flophouse and Grill.


Welcome to The Society

Here at The Procrastinators Society, we're all busy trying to find lots of things not to do (and if that line sounds familiar, buy or rent yourself a copy of the film 'A Connecticut Yankee in King Arthur's Court' starring Bing Crosby and Cedric Hardwicke).

To join The Society, please use the forum below, preferably tomorrow, if you get my drift. Unless I have some unpleasant chores to put off (and h2g2 is always a good diversion when you need an excuse not to do something), it might be a while until I get around to replying, so please consider yourself accepted as a member. You will get an official welcome... sooner or later

I have many plans for the society, including various events and trips, the dates for which will all be announced in arrears, as will the annual general meeting. Our motto is...

The philosophy of procrastination

Many people mistake procrastination for apathy or laziness, and indeed, there is a very fine line between them. With apathy and laziness, very little ever gets done because you just can't be bothered. If that's your leaning, then you should check out The Lazy B******s (you'll probably feel right at home too in Archangel Big 'Evil' Dan's Church of Weekendism).

With procrastination however, everything gets done.... eventually. In fact, some things get done very quickly if there's another task which is more onerous and burdensome. If there is a particularly unpleasant task to be done, and a much easier one comes along, the easier one will most likely be dealt with immediately, giving the impression of efficiency, which to the uninitiated, doesn't seem to be at all congruous with procrastination. Conversely, if there is a really, really horrible job that needs to be done, and a really, really, really horrible job rears its head....well, it's amazing just how much fun cleaning the floor with a toothbrush can become when you have to write a 10,000 word essay! So whilst lazy people are simply avoiding exertion, procrastinators are avoiding dealing with the present.

There is a school of thought3 which says that you should put off doing something today because you might be able to do it better tomorrow. This is a fine idea because when you reach the point where you believe that you know how to perform the task perfectly, and that task is eventually completed, you can bask in the satisfaction that it was done to the best of your abilities.

Am I a procrastinator?

If you exhibit one or more of the following characteristics, you are eligible for membership.

Keeping this thing up to date is quite an arduous, and therefore easliy put-offable task in itself, and is made even more so if you put it off for as long as I usually do, which makes it even more put-offable, and so on and so forth. So don't feel too bad if your name doesn't appear on the list for a long time - there are dozens more just like you.


However, if you have been welcomed in as a member and you don't see your name on the list, or your link is wrong, let me know by starting a new thread in the forum at the bottom of the page, and I'll be sure to do something about it in the fullness of time

Members who have yet to get around to applying or expressing an interest, but are sure that they will.... one day

The Palace Flophouse and Grill is where we like to go when avoiding what needs to be done. It's a rather ramshackle and dusty place, full of old furniture and comfortable armchairs, all provided by the Procrastinators themselves as a subscription fee when joining The Society. The interior looks nothing like this...

It is also home to The Majik Food Maker, The Majik Cocktail Cabinet, and The Majik Bookcase.


Why not come and join us. You know you want to


A word from Wowbagger 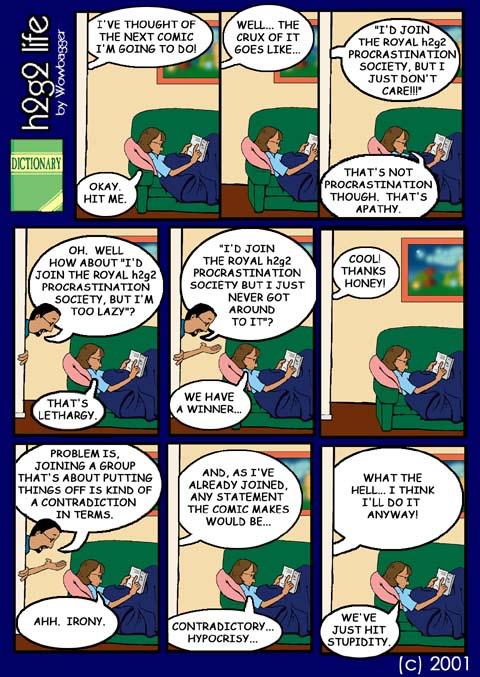