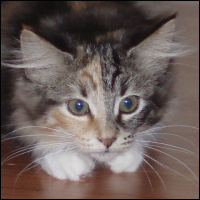 Even before you get to the vet's; try to put a cat in a cat carrier box and it will immediately resemble a car window stick-on Garfield, extending four limbs to point towards the four cardinal points of the compass. Impossible!
- h5ringer

On the first day of work experience at a local Vet Surgery my son Andrew got a baptism of fire 'observing' (I'd guess, through slightly-parted fingers) a dog having its testicles removed. Vets don't call their workplace 'the nutcracker suite' for nothing! When daughter #1 collected my grandson Liam, age 11, who comes here from big school now, she began asking Andrew questions, wanting graphic descriptions of the operation and listening intently to Andrew's replies with an evil grin on her face. She was no doubt storing up the information in readiness to recite verbatim to her husband. She asked what was the 'most gross bit' and Andrew replied: 'when they were pulling all the tubes out'. This knowledge even made Liam curl up and groan in sympathy! Further questioning revealed that once the poor dog awoke, it limped around, whimpering, until its owner collected it. My daughter left for her home with a smug grin like she couldn't wait to relate all the gory details to her poor hubby, who, being a man, would feel every cut, tug, snip and stitch. (Honestly, I can't imagine where she got such evil notions from.)

If he brings home a mad cow don't eat it!

By now my journal had attracted plenty of interested parties and bawdy comments, and before we even set off on Tuesday morning I got a text message from a hootooer (who shall remain nameless) which said: 'Has Andrew got the balls to go back today?' I had to remember that my grandson was in the back of the car and so watch my language1 while taxi-dodging/bike-avoiding/schoolchild-skirting and general other hazards which I had blissfully forgotten about. There were five cats there on Tuesday, but only one was getting denutted. One of the others, a large ginger tom, kept 'talking' to Andrew every time he walked by his cage. I asked what he meant, and he said: 'The cat had a meow that sounds like Hi'. Andrew did inform me that one of the five cats was there because it had diarrhoea - I asked if the Vet stuck a cork in its bum, Andrew laughed and said no, it had an injection.

Check your fridge for things you haven't bought!

One morning we arrived at the same time as a client dropping off a pet carrier. While we were all waiting to be admitted, the occupant of the carrier emitted a pitiful meow and I glanced at Andrew who looked at me and quickly looked away. I guess he was thinking the same as I was, 'hope that's not a boy cat...' One night Andrew told me that they'd got a tortoise which was going to have an operation the next day. Intrigued, I later asked him for an update on the tortoise and what had the treatment involved. He said it had a cracked shell, and the vet covered it in concrete to mend it. I assume he meant Plaster of Paris, or that gap-filler stuff you can purchase for minor DIY jobs. I asked what Andrew had done another day and he said 'cleaned out kennels and cages, put down new newspaper, filled water bowls and played with a kitten' (he had the scratches to prove it). By Thursday I had collected several bags of old newspapers that normally go for recycling anyway, but were gratefully received at the vet's. The nurses and the vet himself came out at 4pm on Friday to say goodbye and thank you to Andrew.

That wasn't the end of the saga, though, because on the journey home my car got boxed in by two police cars attending an incident. I had thought the drive home on a Friday afternoon at 4pm was going to be roughly the same as Monday-Thursday afternoons. Wrong! The roads were as busy as the morning rush-hour. Apparently it was something called POETS which normally doesn't affect me, but the usual workforce know all about. Half-way down the main artery leading to Cleethorpes, I became aware of a siren and flashing lights behind me so I pulled in to allow an ambulance to pass my car. A few hundred yards further on I could see the stationary ambulance double-parked just ahead, and the personnel were alighting. I was just assessing my ability to be able to overtake it when there was an almighty racket: sirens blaring, screeching of brakes, flashing blue lights, etc. I gripped my steering wheel and brought my car to a halt while all around me the scene changed from normal driving conditions to the set of The Bill - a police car appeared to my right, so close I swear I couldn't have opened my door. It swerved in front of my car, front end in but the body at right-angles to my bonnet, there wasn't room for it to pull in between me and the ambulance.

While my brain was registering that now I couldn't overtake the ambulance and continue our journey home, I realised the only thing I could do was reverse... at that moment another police car with flashing blue light parked itself right behind my car. I sat looking in my rear view mirror at the reverse image of a policeman alighting from his vehicle then go back for his helmet, which was on the rear seat. He placed it on his head and walked towards my car. By now I was fighting the urge to be sick and swallowing hysteria. As soon as the rear-parked policeman had joined his buddy and gone to investigate whatever they'd been called for, I stuck my car into reverse gear and swung back until I was sideways on to the road and reversing almost on to the pavement. Driving forward took me to the middle of the road, as I carefully edged out, luckily no drivers behind the second police car had tried to overtake, but were waiting there patiently. I pulled out a bit further and literally drove on the wrong side of the road to get round the police car which had boxed me in. Another stroke of luck, a female driver was approaching from the other direction and with one glance she appeared to take in everything that was happening and swung her car in to her side of the road as far as she could, allowing me just enough room to crawl through and overtake the double-parked ambulance. Phew! Out of the nightmare situation and back to driving home normally, the adrenalin abated and I started to shake. My nerves were completely shot, but both boy passengers (Andrew and Liam) thought it was a great thrill, even wondering aloud if we were going to be on TV. I'm still waiting for the summons.

After Andrew returned to school his fellow pupils and teachers were agog to hear all about his week at the Vets (he was the only one who had been given such a placement). Andrew normally hates being the centre of attention, but for once he gleefully recounted Monday's dog-denutting operation to them in all its gory detail and laughed as he later described to me 'their' reactions, every one of them covering their own privates with their hands and wincing in unison. I'm pleased to report that Andrew enjoyed his work experience but he's decided he doesn't want to be a vet, because the extraction of 'all the tubes' from the anaesthetised animals made his stomach churn. The Veterinary Practice sent a glowing report to Andrew's school the following week.

I did have an amusing follow-up a short while later; my sister called with some birthday cake and asked Andrew how he'd got on at the optician's. Okay, Andrew has perfect eyesight, in fact he'd probably spot a shrew quicker than a hungry hawk. However, I allowed Andrew to answer the question, out of curiosity at what his response would be, considering he'd never been to an opticians, so he'd no doubt think it a silly question. His Auntie Vonnie is a very pretty lady whom Andrew allows to hug and kiss him, so she is mightily honoured. He looked at her with a slightly quizzical expression and said: 'Dunno'. She then looked at me and frowned; I shook my head and repeated 'Optician's?' My sister replied: 'Yes, isn't that where Andrew went for work experience?' I laughed and so did Andrew. My poor sister stood there looking bemused, she'd come to us straight from Mum's house and Mum, who is 89, had told her that Andrew had spent a week doing work experience at an optician's. Needless to say she was delighted to hear it was in fact a vet's practice and even one she used to be a customer of when she lived in that area.

1This prompted reminiscences from posters in my original journal about children who innocently parrot swear words back to the next (shocked) adult of their acquaintance, eliciting blushing from the guilty party. eg pailaway asked his young niece why she looked so sad and she replied 'I can't find my goddam crayon!'