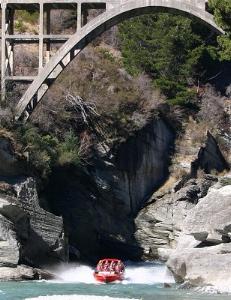 The phone rang while we were enjoying a well-earned post-ski beer at the Dux Deluxe brewpub in Queenstown, New Zealand. It was the guys from AJ Hackett, confirming our 134-metre bungy jump1, highest jump in New Zealand and probably the world, and first of a series of adventure pursuits known locally as the Awesome Foursome. 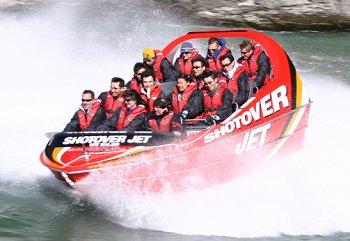 Next up was the famous Jet Boat, which plies the rapids on another stretch of the river. Two huge Buick engines power a sixteen-seater speedboat with zero draught and a lunatic for a pilot, who takes great delight in ducking the nose of the craft just past sunken rocks and floating trees, sweeping the passengers merely inches away from overhanging rocks, and executing trademark 360 degree turns, while burning up and down the canyon above Queenstown.

First you climb into wet-weather gear, then you clamber aboard and hang on to the wonderfully heated safety rail as the pilot does his stuff.

It is extraordinarily exhilarating. The pilots train every day for three months before they're allowed to take paying passengers and it's easy to see why as you duck under the next rock as the side of the canyon passes in a spray-filled blur.

Helicopter up the Canyon

Removing our wetweather gear, we climbed into wetsuits and boarded a bus out of town. Halfway up the hill, our helicopter was waiting, with white-water rafts rolled up and strapped to it's skids. Donning ear-defenders, we clambered aboard.

The pilot didn't hang about. He wasn't simply flying us up the valley, he was going to have some fun on the way, so we skimmed along side-canyons and shot vertically out of gorges, swung around huge rock formations and slipped from side to side as we wound our way upstream.

We were all wearing headphones so that we could communicate with the pilot, and the hardest part was not screaming 'Woooooooo!!!' into the microphone whenever an unlikely stretch of horizon or river appeared in the windscreen.

All too soon, we reached our destination, a spit of gravel in the middle of the Shotover River. The equipment was quickly unloaded, and the chopper returned for another load.

When it returned, it raised an enormous and painful cloud of sand and mica, and over the next hour as it ferried people and supplies onto the spit, we got used to hunkering down and closing our eyes as soon as we heard it hot-dogging down the mountainside.

White-water rafting down the Canyon

Miraculously, a petrol generator appeared from behind a rock, connected to a couple of leaf-blowers which were used to inflate the boats. Once all half a dozen of them were judged to be firm enough, we were allocated first to a boat and then to a guide, who gave us a little tuition into the meaning of all the various commands that were about to be screamed at us. Basically these could be reduced to 'Paddle like hell!', 'Paddle like hell backwards!' and 'Duck!!'.

Then we all pushed off into the water to practice. Everybody in the boat of all ages and from all walks of life had to learn very quickly to work together, four to a side with the guide at the back, and then we were off down the first rapid, followed by a very fit maori guy in a surf kayak as support.

At first it was easy enough and we skimmed down the canyon according to the screams of the guide, 'Left forward! Right backward! All forward! All stop!' The boat was very flexible and the hardest thing was keeping your seat on the outer edge and your feet wedged under the rails in the middle as it twisted and spun downstream. However, before very long it became clear that some people really weren't going to pull their weight and, on a particularly awkward corner surrounded by vertical cliffs of wet rock, one of the guys at the front (who was supposed to set the pace for the rest of us) lost the plot completely. The guy behind him stopped paddling, and we smacked headfirst into the wall.

There was a period of wet and dark as the boat folded like a clamshell, stern to bow, and when it opened up again I was the only person remaining on the right hand side. The guide's paddle floated to the surface and I flung it back to her as she climbed back into the boat, and then it was 'All forward!!' with four people paddling on the left side and only me balancing them on the right, as we went over the next cascade.

Somehow or other, it all worked out and we reached the next area of relative calm without going over again. I credit this in some part to my long experience of white-water kayaking, but I was paddling like a maniac and was pretty tired out by the time we reached the safety of the next eddy and picked up two of the missing people. However, Bronwyn had completely disappeared. It transpired that she had been sucked under for quite some time before popping up near to the guy in the rescue kayak, who had directed her to some rocks from where she hitched a lift on another raft. It was a bit of a relief to see her clinging to the middle of the next boat as it spat out of the cascade and into the side of our craft.

The final stretch was relatively easy, but certainly entertaining. The river entered a horizontal bore which was part of an old mineshaft, and we all tucked our heads down as we drifted in the dark to the tiny circle of light below. Then suddenly we erupted into the sunlight and over a final cascade, paddling like furies, before lying back and enjoying the last gentle drift home. 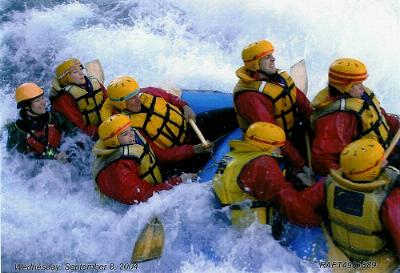 1See Part One for the bungy jump.