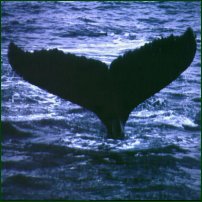 Yesterday I spoke to my niece who leaves tonight for South Africa. She and her husband are going whale watching off the coast of the Cape Province.


It reminded me of so many happy times when I saw whales, - either spouting huge plumes of water, or smashing their tails down onto the water with an enormous splash. However I particularly remembered one July, when I was an undergraduate student at the great age of 42 and I was trying to get my head around all the very serious books which I had to read.


I decided to go away up the coast, and took various profound books on philosophy with me.


I stayed at a hotel at Keurboomsstrand - a tiny little "dorp" and as it was winter I was the only guest. The hotel was right next to the sea and the management gave mea beautiful room overlooking this marvellous bay.


One morning I looked up from my book and saw a great deal of splashing, and swimming about 200 yards off shore. When I went down for a meal, I asked the manager what it was all about.


I was astonished and he continued that every year the whales come to various bays along this part of the South African coast, and it is here that they mate and then the mother calves the following year, when they return again from the Antarctic.


Apparently the birthing process is very very special. The whale is a mammal and gives birth to a wee whale, but who still weighs a fair amount. The birth is as traumatic as a humann birth can be, and so there are two dolphins - either chosen by the whale mother, or who are 'qualified midwives for whales', who assist her.


There is a problem, however, because in these waters there are a lot of sharks,including the great whites, and so the whale mother-to-be and the two midwives are at considerable risk during the birthing process from the predatory sharks. The fish kingdom is wonderfully innovative, however. It seems that a school of dolphins form a circle and swim around the oceanic 'whalian maternity theatre' and keep on swimming round and round until the birthing process has been successfully completed.


I have looked in several places and cannot find any description of this. However, it is a memory which is very vivid, and although I obviously could not see what was going on under the water, the splashes, and goings on indicated that there was some important occasion being celebrated.


To the best of my memory I think the birth took about five hours. I certainly know that I did absolutely no work that day but was glued to my window.


I wonder if anyone else has witnessed this miracle of nature. I believe there are whales in the North Sea and amongst the islands such as the Orkneys.


What a joyful memory. This birthing process happened in July 1972. I wonder if the now fully grown whale that was born that day was a female whale? I also wonder, if she is, whether she comes back to the place of her birth in order to start the birthing cycle again. Apparently the whales mate in particular bays as well. Other favourite whalian maternity units are to be found at Hermanus and also Plettenburg Bay.