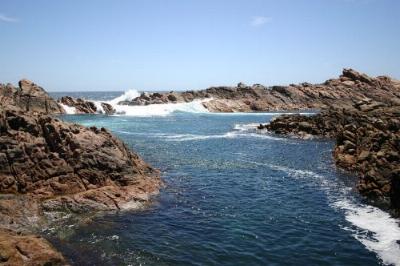 There seemed to be more people in this tiny little one-horse town than we had seen in our entire time in Western Australia. Margaret River is not unlike many such attractions, in that there is no real reason to go there apart from the fact that everybody does. Most such towns have had to build something as an excuse, such as the World's Largest Prawn/Trout/Merino Sheep/Playable Guitar, but we looked in vain for the World's Largest Drinkable Bottle of Wine. Instead, we picked up a few supplies and headed to the Island Brook Estate Vineyard, where we had booked accommodation for the night.

The chalets at the vineyard were superb, set in complete privacy deep in old-growth forest, and surrounded by mature black boys1.

After a very pleasant wine-tasting, we enjoyed drinking our purchases with barbecued steaks, on the deck under the stars. A beautiful blue morning was heralded by the fluting of bush birds. The calls of these western lorikeets and cockatoos seemed much less raucous and more pleasant than those of their eastern counterparts (or maybe it was the wine). Under foot, the bush was alive with tiny flitting insectivores. It was perfect for a long walk before breakfast. 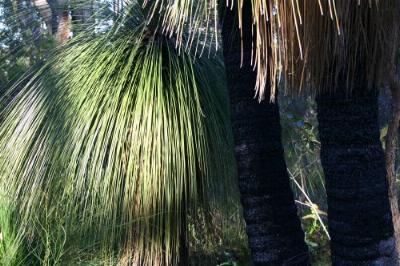 Cave Road runs the entire length of the Margaret River peninsula, just a few vineyards away from the sea. It is named for the enormous caves at the southern end; Jewel Cave, Lake Cave and Mammoth Cave. It can be hard to get a ticket to get in, but we managed a tour of Mammoth, so called because of its awesome size. It's a heavy tourist site, along prepared walkways with recorded guides on headphones, but well worth the visit.

These caves were not formed by the usual erosion of limestone, but instead by water trickling through sand dunes, forming a crusty cap over the underlying water table. The ceiling regularly collapses, which means that the floor is liberally scattered with the remains of overhead stalactites. All very impressive. 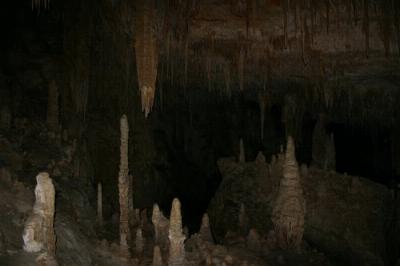 Further up Cave Road, a promontory of colourful gneiss has been eroded into a series of channels by the sea. These channels form a maze of rock walls, resulting in an impressive swirl of water as every incoming wave tries to force its way along the narrow canals. It is very unusual and quite beautiful.

Our tour of the peninsula ended, after a hot but very interesting walk around Naturaliste Point, at Busselton, which boasts 'The Longest Pier in The Southern Hemisphere'. At almost 2km, it is the result of an arms-race between the need to service ore carriers and the silting caused by the pier itself. The longer the pier got, the more it trapped sand and silted up, until finally the whole thing was destroyed by a cyclone. Most of it has since been rebuilt, but parts of the old pier are still visible, particularly at the far end, where they have built a sort of reverse aquarium where you can climb down into a large tank and watch the fish go by. 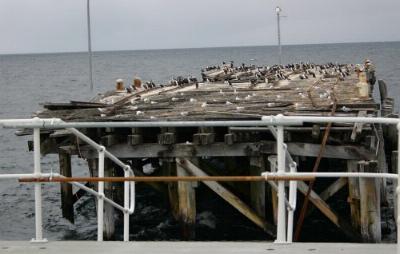 We gave that a miss, as we have scuba dived under many piers and the aquarium was pretty crowded, but the pier itself made a very pleasant walk. Much of it was lined with fishermen, some of whom were bringing up large cuttlefish which made an incredible inky mess. One nice touch was a line of memorial plaques to past residents who had, apparently, spent their lives fishing here. We spent some time watching a large Chinese family who were reeling in lines and crab pots with such dedication that it looked as if they were provisioning their restaurant for the evening; perhaps they were, because there certainly seemed to be no shortage of fish.

The pier had a very pleasant feel to it. Apparently there used to be a train that ran for much of its length, but it seemed that it had broken down one time too many, and the warped and twisted tracks now just gave one more reason to keep careful watch of your step when the pier narrowed, as it occasionally did, to just a couple of metres wide.

It was time to return the GS, so we rode back to the Darling Range, thanked Mark effusively, and boarded a commuter train into Perth.

We'd thoroughly enjoyed all the wines that Margaret River had had to offer, but it was time for a change of beverage so, after dumping our gear into a convenient backpacker's, we repaired to the Brass Monkey, where we addressed ourselves to the Matilda Bay ales from the comfort of deep leather armchairs. Tomorrow we would explore Perth, but tomorrow was another day. 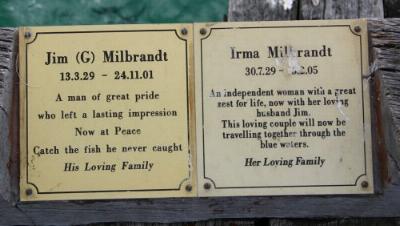 1For non-Australians, a black boy is a kind of grassy palm that is designed to be burned by bush fires at regular intervals.