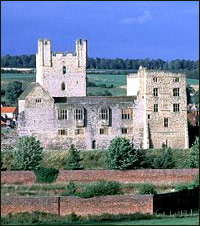 Friend, The life and times of The Great Knolly - more formally known as Montagu Valentine Knolly - have been the subject of much discussion, debate, speculation and extrapolation over the years. However, there are two periods of his long, fascinating and eventful life that are shrouded in mystery - the very beginning and the very end. Here follows a very brief discourse on this remarkable man's earliest days - in fact, what one might almost term a prehistory of Knolly.

There were several women in Knolly's life, but certainly in the early
years, none as important as the woman to whom he referred as 'Aunt
Lettice'. Lettice - or Lady Lettice Montagu to use her full title - was
almost certainly no relation to Knolly's natural parents, but even so, she raised him as if he were her own son at the magnificent Hoot Hall, near Marlborough in Wiltshire.

Lettice Lacey had a working class upbringing. She was one of seventeen children - the only daughter - in a family from Pratt's Bottom in Kent. Her father earned an adequate wage from cultivating wormwood, and her mother stayed indoors and had babies, rarely venturing past the wicker gate at the front of the house. The Laceys were a decent and happy family and every child was as well-educated as possible given the circumstances. At the age of sixteen, Lettice won a scholarship to the Royal Equestrian College at Lewisham. Here, she worked diligently at her academic studies and according to her school report, also approached the practical activities (such as mucking out, castrations and firing crossbows at moving targets whilst riding bareback) with 'vim, vigour and great gusto'.

Lettice was a natural with ponies and horses and was soon successfully representing the College at events around the south of England. Whilst competing at the prestigious Peckham Rye Gymkhana in August 1843, she was swept off her feet by a handsome, dashing, brave gentleman officer who also happened to be stinking rich. And he was a Lord of the Realm. And he was a nice bloke. Colonel Lord 'Monty' Montagu of Avebury took Lettice to be his lawful wedded wife in September of 1844 and they moved in to Hoot Hall after their honeymoon Yeti-hunting in Nepal. The future looked nothing but bright for this couple. Lettice always wanted children of her own and had dreamed of a large, happy family; Monty was the ideal image of husband and father.

Sadly, an accident in 1845 robbed the happy couple of their dream and
Monty of his life. He was lost to the deep when a freak tidal wave swept
him overboard from the deck of the Woolwich Ferry, just off of the coast
of Silvertown. Despite the heroic rescue efforts of the Royal Navy in
mountainous waters, Monty was never seen again.

Lettice never fully recovered from this catastrophe and remained single for the rest of her life, despite countless offers of marriage from top-drawer European Princes and even from His Holiness Pope Rocqui III (although the latter proposal was never officially confirmed). She had men-friends, many of whom considered themselves potential spouses, but none were ever granted the honour of staying unaccompanied with Lettice past tea-time.

In the main library at Hoot Hall, there is a series of leather-bound
books, each with the Montagu coat of arms emblazoned in gold leaf on the
front cover. These books are the Montagu Journals, presenting a detailed
and accurate account of the goings-on at Hoot Hall since the Montagus had it built in 1619.

In the Journal for 1862, it is recorded that on the morning of 14th
February, Daisy Rootes (one of Lettice's kennelmaids at Hoot Hall) was
exercising the ten pedigree Irish Wolfhounds when she discovered what at
first sight looked like a small bundle of laundry on the front lawn.
Closer investigation revealed a healthy baby boy - about one week old -
carefully wrapped in calico sheeting which bore the label of the popular
'Knolly Mills' textile manufactory from nearby Swindon.

One of the dogs - Daisy did not know which - had chewed and swallowed
an envelope that had been pinned to the sheets. For three days after the
discovery, the junior kennelmaids were given the duty of sifting through
piles of steaming dog-motion to look for any paper that might have
survived digestion. Alas, there was none (but the Journal does tell us
that the kennelmaids were each rewarded with an extra tuppence for their
efforts). Other than the potential contents of the envelope, there were no clues to the boy's origins.

The abandoned baby presented Lettice with an opportunity to fulfil a
dream. She wanted to formally and legally adopt the boy as her own son.
However, some of the less progressive of the Montagu patriarchs and
matriarchs would not concur, stating that they could not be certain of the boy's parentage and that there was a chance that he might be some sort of 'foreign-Johnny'. The Montagu elders did allow Lettice to become the legal guardian of the child, a decision which she accepted with great grace and dignity.

The Montagu elders relented somewhat in the naming of the child and
allowed Lettice to use the family name as a Christian name; Daisy was
allowed to choose the middle name and so selected the name of the Saint on whose day he was found. The surname proved more of a problem. Eventually, the chief gardener, Mr Bonemeal, suggested that they use the name on the label from the baby's swaddling. Hence Montagu Valentine Knolly.

As soon as she thought that Knolly might be old enough to understand,
Lettice explained that she was not his real mother. He took the news very well for one of such tender years, nodding quietly and then innocently asking if she would be his Auntie instead. By all accounts, the entire Montagu household burst into tears in a show of sensitivity and emotion that made The Waltons look as badly-behaved as the provisional wing of the IRA.

Friend, I would like to thank you for your time in reading this, and I would also plead with you to accept my apologies at the brevity of this introduction. There is a wealth of information now available from both the Knolly and Montagu estates; the author hopes to make more of this fascinating material available to the general reader in the very near future.