McMurdo station is the current headquarters to the United States Antarctic Program. For 2000 people in the summer and 200 people in the winter it is home away from everywhere.


McMurdo station is located on the southern tip of Ross Island by the northwestern edge of the Ross Ice Shelf. Summer temps hover around 0 degrees C and winter temps can reach as low as -50 or -60 degrees C. Wind chills are exponentially colder. Wind speeds average around 10 knots but in the fiercest of hurricane blizzards1 they can approach 200 knots. 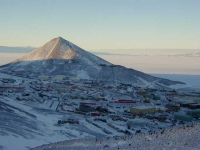 Most of the people that visit McMurdo station arrive by air. Air service is provided by the US Air National Guard and the Royal New Zealand Air Force. The US Air National Guard flies several types of noisy crowded transport planes from Christchurch, New Zealand, to one of our three runways. The flights, while short on comfort, will help one appreciate the luxury of flying 'coach'. Bag lunches are served on the flight and are actually worth eating. The seasoned traveller will drink only half the water provided, as the Antarctic weather is fickle and the flight may have to turn back. In these cases a flying time of 10 - 15 hours is not unusual. Another good reason to avoid overhydrating is to decline to use the spartan rest-room facilites on the airplanes... about which the less said the better! 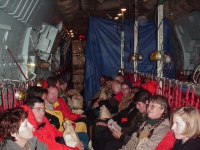 If one arrives in early summer2, one will probably arrive at the ice runway. Don't let the name fool you, all the runways are on ice. The ice runway is only used part of the year because, in late summer, it breaks up and floats away. Ski equipped aircraft will land at Willy field and late season arrivals and departures are at Pegasus field. Both of these airports are located on the permanent ice of the Ross ice shelf. All of the airports are served by semi portable buildings on skis. This has led to the joke that the Willy field is the world's southernmost trailer park. 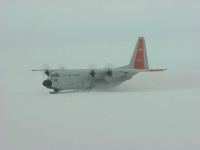 From the runway, a shuttle bus will bring you to McMurdo Station. The ice road will offer most visitors their first view of town, and Ross Island. Immediately noticeable will be the imposing bulk of Mount Erebus. Mount Erebus is the world's southernmost active volcano. To the east of Mount Erebus is Mount Terror, a slightly smaller extinct volcano with a much cooler name.

Assuming the shuttle bus does not get stuck where the ice road transitions to the volcanic rock of Ross island, the visitor will be deposited, sans luggage, in front of building 155. Luggage will show up 2-3 hours later in the MCC or Movement Control Center. An orientation briefing in Building 155 is usually the next item on the agenda. 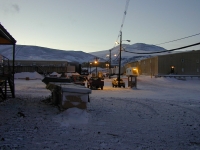 Building 155 is in some ways the central building of town; it houses the galley, the personnel offices, the recreation department, the housing offices, personnel berthing, the radio and TV station and the Library.

Just outside of building 155 is the clinic where our competent medical staff can handle anything short of major surgery. The large amount of heavy construction going on all year round keeps them busy.

On the other (west) side of Building 155 is Derelect Junction. From here shuttles run to the airports and to Scott Base the New Zealand station two miles east.

To the southeast of building 155 and down the hill is building 1, the Crary Science and Engineering Center. It is the headquarters of the science in town. The sole function of the US Antarctic program is scientific research and this is where much of it gets done. There are ongoing projects in astronomy, biology, geology, glaciology marine biology, sedimentology and many more. 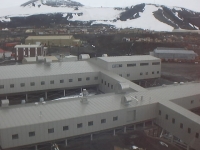 If one continues down the hill one will find such fascinating things as the gymnasim, the helipad, building 159 (Field Party Communications Shop also known as the puzzle palace) and eventually the McMurdo sound.

Downhill of Derelect Junction is the Chapel of the Snows and Building 165. Building 165 is chock full of arcane acronyms. It is home to the CODF's office3, MacRelay, McMurdo radio communications, MacWeather, McMurdo weather station, MacOps, McMurdo operations and Mac Center and Raven Ops (?).

Uphill of Building 155 is Building 140, also known as 'MCC'. It is also 'central supply', where the intrepid Antarctic traveller can quench his thirst for office supplies. To the north and west of Building 140 stretch a tremendous expanse of cargo yard. Anything necessary to run an Antarctic station can be found in these yards by anyone with the necessary authorization and a superhuman amount of patience!

Scattered throughout the eastern and central parts of town are dormitories for the working and researching population of Mcmurdo. Rooms are small but generally cozy, and all but the best have communal bathrooms and showers.

To the east of Building 1 and uphill of the helipad is the Chalet. This is the National Science Foundation's headquarters in town. Not coincidentally it, along with the Chapel of the Snows are the only buildings in town built with any kind of aesthtics at all.

No tour of McMurdo station would be complete without mention of our two bars, Gallagher's and Southern Exposure, the non-smoking and smoking bars respectively. The coffee house also serves alcohol and had some of the best coffee in Antarctica I am told.

The Bowling Alley is in Building 63 and has two lanes and an antique Brunswick manual pinset machine. If one is quick enough and heartless enough, it is possible to cripple a volunteer pinsetter with a well timed throw of the bowling ball. 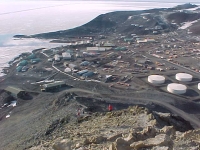 On the eastern edge of town towers Observation Hill. It rises seven hundred feet above sea level and its summit is the location of Scott's Cross. Scott's cross is a memorial to Scott's last polar expedition on which he died after reaching the south pole after Amundsen. The stirring words of the poet Tennyson are inscribed on the cross:
'To strive, to seek, to find and not to yield.'

From the summit of Ob Hill, on a clear day, one can see hundreds of miles in almost all directions. The view is breathtaking.

On the western edge of town is the ice pier, a dock made from ice. It is here the annual resupply vessels dock to unload. The US coast guard icebreaker Polar Star also docks here when visiting. When the tourist cruises visit town they also come ashore near here.

Just west of the ice pier is Captain Robert Scott's Discovery Hut where Scott spent the winter when his ship The Discovery was trapped in the ice. I believe Ernest Shackleton also used the hut after his ship The Endurance was crushed in the ice. All ships currently in use in Antarctica were built with Steel hulls.

If one wants to take a hike or a ski out of town, there are two trails open. The Castle Rock loop heads uphill north of town to Castle Rock which has even better views than Ob hill. To the south of town, and only open in the early summer, is the Armitage loop, which goes entirely on the sea ice around Ob hill to Scott Base. From personal experience gained while drunk and freezing I would like to mention that if one is returning to McMurdo station following a party at Scott Base, the road is the fastest, warmest and most direct way back to town. It is worth mentioning to never stray from the trails. At the risk of sounding melodramatic there are snow covered crevasses concealed on each side of the trails and people have died falling into them. 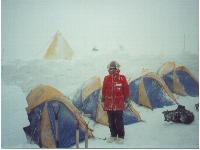