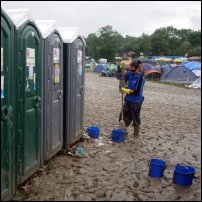 Tony Robinson, in a recent Channel 4 series, presented us with accounts of some of the worst jobs in history. Some of the least satisfying occupations require little explanation: gut girl, chimney sweep and rat-catcher are all on the roll call.

In an age before employers had to take their workers' welfare into consideration, other jobs held a high risk of severe illness. Women working in Victorian match factories were exposed to deadly white phosphorus, which led to an affliction called 'phossy jaw', which eventually rotted the jawbones away.

Still - we don't all share the same likes and dislikes. Though some of us might baulk at the idea of working in a sewer, as an embalmer, or as a colon hydrotherapist, to those of us for whom 'hell is other people,' working in a call centre might be the ultimate challenge.

This week, we want to know (unsuitable references to Derek and Clive aside):