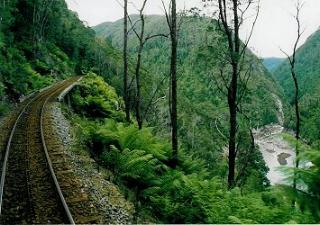 A Letter From Tasmania: Part One

After a nap and bottle of Pinot Noir on the verandah, we ambled gently back down to the restaurant for dinner, where our waiter Ken kept us entertained and supplied with excellent food and wine, after which we repaired to the starlit balcony for a Pinot Noir nightcap.

Breakfast arrived, red-riding-hood style, in a covered basket. Sitting in the bath, feeding each other grapes as the sun rose over the vines, we never wanted to leave. However, eventually we all climbed back into the car and set of to Strahan. 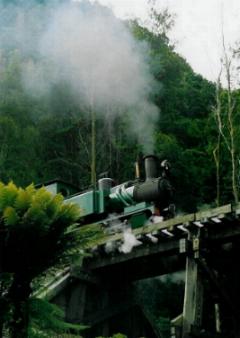 Tasmania being vaguely triangular, and - at least on the map - not very big, we had thought that we'd spend a few days in each corner. There's a steam train that runs from Strahan to Queenstown that we were intending to catch, so we picked what seemed to be the most direct route and set off, Patrick at the wheel because it was Bronwyn and my turn in the back. However, the road soon revealed itself to be an endless stream of mountain switchbacks, and the over-soft suspension of the big Mazda SUV soon had us feeling pretty sick. Thankfully a local store hove into view and Bronwyn stumbled in to buy us some motion sickness tablets. They didn't have any, but the owner took one look at Bronwyn's face and gave her a handful from her own handbag.

We were looking so green that Patrick and Helga volunteered to sit in the back, so I settled down to drive. As corner followed corner it became clear that we would never reach Strahan in time and that, instead, we would have to try to catch the train in Queenstown. I stepped up the pace a bit and the tyres began to squeal as we tore over the final pass and headed back down the endless switchback down into town. Suddenly the mobile reception, which had been dead all over the bush-filled centre plateau, sprang into life and Patrick was shouting over the sound of screaming rubber as he tried to get them to hold the train for just another few minutes and, yes, of course we wanted first class tickets, as I floored it and drifted sideways down the tiny mountain road, finally pulling up beside the train in a triumphant cloud of burning rubber.

Then suddenly we'd entered another age; a lovingly restored 'Premier Class' train carriage with a viewing balcony and Julie, our laughing conductress, welcoming us aboard with a glass of champagne. We settled back into the seats as the old locomotive whistled and chuffed gently out of the station.

The train used to haul copper ore from the mountains down to the town for processing and the track was hacked through the rainforest, occasionally criss-crossing the heavily poisoned vividly yellow river over high wooden viaducts. Now the train carries tourists on a beautiful journey through the enormous ferns and palms, the river no less vividly yellow, but forming a beautiful counterpoint to the lush green of the recovering bush. I'm not sure how the they fared in Tourist Class, but for us the trip was lubricated with as much wine as we could drink and an endless supply of snacks and fruit and cheeses, dotted all the while with Julie's tales and jokes.

Eventually, however, it had to come to an end; the steam locomotive was pushed around on a turntable and coupled to another set of carriages travelling in the opposite direction and a less exotic engine took us down to the bus back to Queenstown.

Everybody we'd spoken to had said that if we were staying in Queenstown, then we should stay at the Imperial, which turned out to be a wonderful colonial structure of carved dark wood, stained glass and sweeping staircases, and of course a bar. 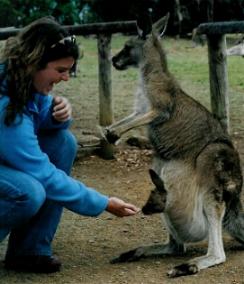 The next morning, the plan was to drive to Hobart, third apex of the Tasmanian triangle and southernmost point of Australia. It was Patrick's turn to drive, so off we set up that same vertiginous switchback that I had so precipitously descended. The tyres started to scream again... and unfortunately we overcooked it on a bend and slammed sideways into the rock wall. Ouch.

Luckily one of the wheels took most of the damage, so we changed that and kept going and, although the transmission was crunching quite alarmingly, we reckoned we would probably get there in one piece.

Finally we rolled into Hobart, once more surprised by how long it took to drive anywhere. Just outside the city is a zoo that specialises in Tasmanian Devils. They have loads of them and, despite their fearsome reputation, they look really, really cute. In common with most Australian zoos, you are encouraged to feed the animals (although not the Devils, which despite their innocuous looks would be unlikely to give your hand back), and we had a fine time feeding the roos and emus.

We had hoped to do some climbing in Hobart, but they weren't able to take us on short notice, so we booked a session back in Launceston, climbed back into the car and headed northwards, back to the gorge where it all started. There we met Bob from Tasmanian Adventures, who took us for a very enjoyable clamber in the sunshine.

Finally, tired and happy, we returned to that first Launceston hotel for a last night of excellent Tasmanian beer, tall tales, and dreadful games of pool.