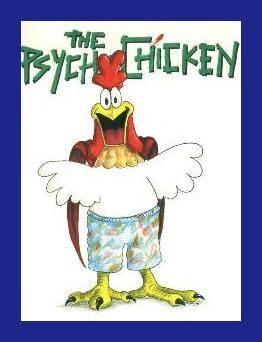 Mount Tarawera is the sacred mountain of the local Maori tribe, Ngati Rangitihi, and is of great spiritual and cultural significance to all local Maori people. High ranking tribesmen are buried on its slopes, as are 150 or so people who died the last time it lost its temper.

The mountain used to be home to one of the natural wonders of the world and, arguably, New Zealand's first tourist attraction; the pink and white terraces. These were deposits of salts and minerals laid down over millennia by volcanic activity and geysers which formed beautiful layers and steps in the mountainside. The local Maori owners of the land welcomed scores of wealthy tourists (and their money) to the area, while the elders looked on in suspicion. They warned that the land was being abused and that soon the land would rebel, taking its gifts from the tribe and bringing death and destruction in their place.

On October 10th, 1886 Mount Tarawera erupted. It took with it the village, over 150 people and the pink and white terraces they'd all come to see, buried under rock forever.

What it left was the dramatic and beautiful Tarawera crater. Now the Maori tribe who still own the land entrust its care to a small group of white New Zealanders, who are the sole company providing tours of the mountain and who rigorously control access and care for the land. Their sympathy and respect for the Maori culture is obvious - one ranger in particular was full-blood Maori, complete with extensive facial tattooing.

Arthur, however, was our guide for the day. He led us up the mountainside in a 4x4 truck, to where the trek began. We hiked along the edge of the mighty crater under strict instructions to follow his steps exactly and keep an eye and ear out at all times for rock falls. We enjoyed amazing views not only of the crater itself, but also the entire Waikato region which stretched out in all directions like a patchwork quilt. Visible in the distance was the permanent plume of smoke and ash that marks out White Island.

Then it was a slide down a steep scree-slope to the basin of the crater. Once we were over the lip, the atmosphere changed completely - all noise other than ours ceased, which all of a sudden seemed deafening, and the temperature dropped noticeably. My goosebumps had goosebumps as, in the spirit of our Maori friend in Waitangi, Arthur sat us down in the crater and told us the legend and the science of the eruption. He told of the local Maori chief's visions warning of the eruption, and how no-one - not even his fellow tribesmen, deafened by avarice, listened to his warnings; and then pointed out the clearly visible fissure where the molten magma had first broken through the Earth's crust. Alas there is now no trace whatsoever of the terraces that had brought the tourists and village there in the first place; only a few rare paintings and very early photographs begin to show today's visitors the splendour of what they'd have seen if only they'd come 120 years earlier. He then respectfully requested a minute's silence - after all, 150 people had given their lives for what we were now experiencing. It was entirely appropriate, and it's a minute I will never forget. 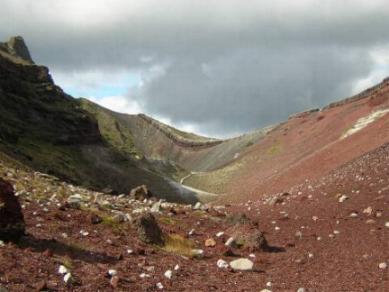 The landscape of the crater is unlike anything I'd ever seen outside of a science fiction painting. The blood red and grey landscape ran upwards in all directions, and the basin itself was littered with boulders up to 12 feet across which regularly break off and fall from the ragged edge of the crater. Occasional rough bush sprouts between the rocks and forms a home for a few solitary weird insects. From time to time a bird silently swoops down at the plants and then disappears, but none of this life penetrates the cold, dead silence.

The atmosphere in the group as we zig-zagged back out of the mouth of the crater was substantially different to when we'd slid down the scree-slope as if it were a fairground ride. I got back in my car, and chilled for a while, before hitting the road to Raglan.

About 50 miles down the road I noticed the smell had gone.