Just Why Is It?

'It'll polish out, don't worry' I said to the assembled crowed as the van was brought into the yard. Just so you know the driver was ok, actually walked away from the crash and spent Christmas with the family. I think the driver should have feigned a little so as to get Christmas in hospital - out of the way of the in-laws! I always think that Christmas spent with strangers is far better than with the family. Its a personal way of looking at it, but I have my own reasons - and she's about 5' 2' of pure mother-in-law! The street furniture the van hit has left a young one and we haven't been able to catch it yet!

So, back to the plot.

'It's Christmas and I want all of these vans out delivering' he said.

We sniggered a long and deep snigger - the type of snigger which you can never show and also which means 'just where are your mental thought processes kept? In a locked vault, inside a really deep mine, on one of the moons of Jupiter, like the one that's just been opened up to mining by the Off-world mining corporation in some Arnie film'. I'm really trying to stop just bursting out laughing at this moment in time, as is a lot of the assembled crew, till someone points out that it's actually F**ked and not going to be ever fixed and is going to the 'red van heaven, in the sky and it will have wings and everything'. Christ, that's it! I have to go in otherwise I'm just going crack up at this manager who's trying to be really serious about trying not to hire another van to cover this one. All due to money eh!

I turn and walk back to the garage door.
'Where do you think you're going?' I hear and then 'Did I say you could go?' and then 'Back here now!'

I'm at the door and I open it and walk in (a slight mistake on my part but I was cold and he was boring me senseless). I head for the coffee machine (I recommend the tea, not the coffee, that's if you ever come to our garage). I'm ignoring him and everyone else as it's nearly dinner time; just time to put the wheels back on the truck I'm working on and off to the canteen for some snorker's and chips, or so I thought.

'BANG' goes the door.
'OI, YOU' I hear something shout behind me and 'something' is the correct words for this pig of a person whose sole intent is to make everyone's life miserable.
'You talking to me?' I question.
'YES YOU' it says.
'Well that's ok then. I was worried for a moment there!' I say.
'I had not finished talking to you lot.' it says.
'Sorry, mate I thought you had and I have such a lot on this afternoon I wanted to get on.' I say with a smile.
'MATE! YOU JUST CALLED ME MATE!' It was red with rage; it shouted.
'Ahh lunchtime! See you in a mo.' I say and I proceed to wash my hands. Now I really don't like the new soap we use. It's not really getting your hands clean and, as I had the managers full attention and he was stood not too far away from me, I brought up the point to him.
'This new hand cleaner you've started to buy is really not as good as the last lot we used. It tends to not get your hands clean.' It went really quiet and I really should have known better than to repeat the remark. I could have sworn that he hadn't heard me but, apparently, he had!
'I'm not talking about the f***ing soap' it explained and, in the background, there were 5 men going 'ooooOOOOoooooo' and holding imaginary handbags in unison up to their chests. 'It' spun round and they all sniggered at him, pointing too! It's times like these I wish that I could hold a straight face as it's got me into more trouble than I care to remember, but I can't and I don't think I ever will. 'It' just looked at us all and stomped off into his office and the door slammed shut. We went to lunch!

A pleasant half-hour was spent by us all. We didn't talk about what happened because it's an everyday thing working as a mechanic. Someone has a hard day, something doesn't go right, so everyone makes fun of you and, when it's someone else's turn, you make fun of them. Life! It was 'it's' turn that's all. Today, tomorrow it might be my turn. I wash up my things, put my boots back on, walk downstairs and am greeted at the bottom of the stairs by a really worried looking Kathy.
'He's been in there ever since you lot went up to lunch.' she says and follows it with 'Listen!' so we do. You could hear 'it' sort of talking, mumbling, then a crash as something is thrown or pushed over, then quiet, then a raging cry, then quiet again!
'What are you going to do about it?' she says.
'ME?!' I say.
'Yes, you!' she shouts quietly.
'It's not my doing' I say, knowing all the time that he's been acting strangely all of last week.
'Yes it is.' she says. 'If you hadn't started this morning with 'Dirty' over that blasted spanner, he would have been ok!'
'You sure? Dave had no right using my best 27mm spanner as a can opener. A 13mm would have done a better job at opening the can, I think!' I say, trying to be flippant, failing badly and knowing it - and she knows it too. So 'Ok, I'll go into the office and see if he's ok but I think you should call his missus, too.' I say putting my hand on the door handle.

Inside the small office I found him. He had removed all of his clothes and had passed them through the document shredder. The rest of the room was a complete mess. I knew how he felt, I'd been there.
'I can't seem to find this months expense sheet.' he says. Suddenly he was a 'mate' not the 'manager' - someone who needed help so I gave it.
'Kathy, can you find me a big towel or something like it?' I say through the door to her.
'Ok!' she says.
'Can you tell Dave to come here to give me a hand?' I carry on and an 'ok' follows. I go back into the room. He is still sat there passing the last of his socks through the shredder and, when those have run out, he asks for something else to shred so I give him some pieces of paper. He starts on these and, as he starts to pass them through, he starts to talk. Not in a measured way, his usual way, but like someone has opened a tap in his head. The flood tide has been opened. All the flotsam and jetsam that we all keep in there is pouring out! Dave pokes his head around the door holding a towel.
'Christ!' he says.
'Yeah...' I say '... but this goes no further than us, right?' He just says nothing and keeps looking.
'RIGHT?' I say again and nudge him in the ribs.
'Oh, yeah right!' he says and adds 'His missus is on her way and do we need the first aider?'
'I think he needs a lot more than sticking plaster.' I say. About ten minutes later the general sales manager comes in to take over.

So just why is it that this bloke who, on occasions, has made my life hell with the inbuilt petty madness, upsetting my weekends by calling me back into work, talking to me like I'm a two year old, refusing to pay my overtime because it wasn't agreed before I worked it and yet he was the one that told me to do it and I would be paid for it, phoning my home and telling my missus I'd be late home even before telling me I was working late or even seeking my permission that I would even work it, made me CARE ABOUT WHAT HAPPENS TO HIM? To see someone stripped of all control/emotions is one of the most terrible things I have ever witnessed. It's not the first, either, but I'm afraid to say my third and it's only been in the last 5 years or so. All of them were managers in the same sort of job.

His wife turns up, as they all do, looking white with worry not knowing what they will find and knowing he's never going to be the same again (they never are).
'Right on Christmas too...' I keep thinking and also, which is not a gracious thought, '.. glad it's not me.' I've been too close to my own on a few occasions, so I'll ask you to just spare a thought for all those who need a little bit of help this time of year and, if you can help out, please do! 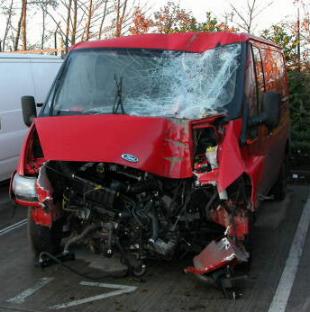