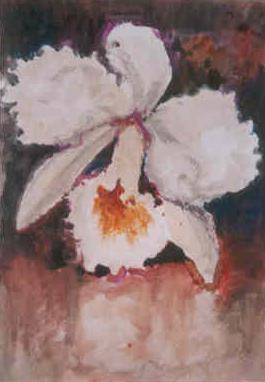 A Trip Within the Trip

Early in the morning several sightseeing buses were available from Kona but we wanted a guided tour to learn about this wonderful Land. 'The Polynesian Adventures' company offered a guided tour using a good-looking small van which held only a few people.

It just so happened that this time we got very lucky. The tour guide was a vigorous-looking young man with a pleasant voice and educated speech. Touring around the Island with him was like listening to a talking book. In one short day we were given more information than we could possibly gather from taking the time to read several books.

The Island history involves the first Polynesian settlers' barbarian custom of human sacrifice. There is a temple, where they did these acts, which commemorates these primitive times. But there is also a so-called 'Place of Refuge' - perhaps for those lucky enough to avoid getting caught! There are no written records from these times; the stories have been passed down by word of mouth and become part of the Island folklore.

Six century later Christian teachings took over from the barbarian behaviour. Captain Cook discovered this Island but, during a fight with the natives, he also died there only a year later in 17791.

At these historical places we got out of the van and looked around. The old-time memories of human sacrifices were very unpleasant and the site of Captain Cook's death was equally depressing - and it was continuously very hot. But our guide was making the history of the past come alive. He was not only a tour guide but a very good teacher as well.

Driving further south we reached a coffee plantation. Oh, dear! Coffee loves very hot temperatures. Most coffee for the Western World comes from South America but the Kona Coffee is famous and not easily available. There is not that much produced because it is only grown in a small area. The significance comes from the volcanic soil. Plants, fruits and flowers are greatly affected by the nourishing ground of a sleeping volcano and this is manifested in their colour, taste and aroma. There was a very nicely decorated shop filled with the intoxicating fragrance of Kona Coffee! The coffee beans were attractively packed in cartons decorated with charming flowers. The tour people were anxious to take some with them.

About noontime we arrived at the highlight of the tour: 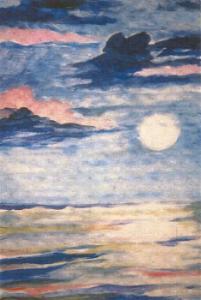 It was not the first time that I had visited a volcanic area. All I can say is that, outside of the spectacular show when a volcano is active, it is not a pretty sight. There was no volcanic eruption at the time we were in Hawaii. But one never knows: is this the end, like the 'Death of Pele', or is the Goddess just resting in her fights with Puna? These are the two troublemakers according to the legends of volcanic activities.

The volcanoes had been quiet for some time so the tourists did not come. This was having a great affect on the tourist industry. Remember, on my arrival in Hilo, what the taxi driver told me about the depressing economical situation in Hilo?

We had lunch in the Volcanoes House building which stands at the edge of a crater 3 miles wide! Kilauea Caldera is the name of the sunken crater and it boasts awesome surrounding. In the building the tourist has a very wide selection of totally spectacular photographs to choose from which show the previous volcanic eruptions. But outside, walking around, it was a most unpleasant place! The ground was steaming from the molten lava lying near the surface and the odour from the sulphur smelt like rotten eggs. This is quite toxic to some people. We soon heard an ambulance coming to pick somebody up to take him to a better place to breath. They call it Vog - the volcanic fog. You don't want to breath it!

Unfortunately, taking photographs proved a hopeless case as the sight was good for nothing! The smoking gray and yellow sulphuric ground with rocks of frozen lava wasn't conducive to pleasing scenic pictures.

The park encompasses about a quarter of a million acres because it includes Mauna Loa in which you can hike for months. It is also possible to go down to the beach and many well-kept camping sites are available. After all, it is the biggest park in US territory of which the volcanic part is just a small area. Therefore the Big Island has a lot to offer.

Kilauea volcano had been active since 1983. In 1988 the lava flows blocked the road and, in 1990, did a tremendous amount of destruction. A visitors centre went down and, the following year, an entire village, Kapalana, was swept away. The recent flow brought up about two million cubic yards of red-hot lava.

What you could see, during the day, were the seaming clouds and, at night, the lava was glowing with a sparkling red colour. When there are spectacular fireworks coming from the activity of Pele and Puna cars come from all over to get closer - but the natives run away in the opposite direction. No, we did not witness Goddess Pele's activity. But at least we heard from somebody who had seen such an event.

Further along our journey we came to the famous Black Beach which also gave me an unpleasant impression. The coarse, leftover lava was just such an unnaturally bleak sight as it spread along the edge of the Ocean. Perhaps it was warning you that, at some time, it was the most destructive element of Nature in action in this area.

The volcanoes are about 30 miles away from Hilo. We passed, once more, the beautiful garden I wrote about in a previous episode - but this tour did not stop there. However, further ahead, was one more very interesting and memorable place to see - and well worth a visit - The Macadamia Nuts Factory and Plantation. 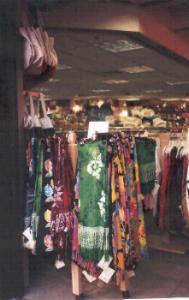 This is the most sterile factory operation which visitors can see on the island. We didn't enter any part of the working area but there was a roughly flight-high walkway going around the building where the wall was glass. Through the glass the visitor could look down and see the – mostly - Japanese workers in operation as they handled the nuts. They were all dressed similarly to pharmaceutical factory workers in white coats with the head tightly covered by a cap. They cleaned the fruit, took off the shells and also packed them in sterile conditions. This guarantees them getting to the market in a fresh and preserved condition - essentail for this expensive merchandise. They are a delicious and very nourishing fruit given to us by Nature.

After the tour every visitor got a most enjoyable ice cream made from Macadamia Nuts. The plantation was adjacent and kept in the same manner as the factory. The trees were in perfect order, planted exactly at the distance required in order to grow and bear fruit favourably!

The day was leaping ahead into late afternoon and we had to get back to Kona before dark - but there is no tour in America where the visiting tourist isn't given a chance to 'shop till they drop'! Inevitably we reached a nice shopping centre filled with many beautiful and desirable items aimed at the tourist trade. I had no intention of buying anything from that market, but found an art gallery where I looked around. As expected, for passing tourists, the visual artwork being offered was more for the tourists' general demand and the artists weren't taking chances by showing any unusual creativity.

When we got back to Kona most of the people expressed their great satisfaction and thanked the Guide for his most excellent job. Our host was waiting at the arrival on time and took us back for a good night's sleep. Next day we returned to Honolulu with Aloha airlines.

The entire trip reached an end in Honolulu a couple of days later but events are not over until they are over. Just wait and see in the 6th and Final Episode of my adventure in Hawaii. 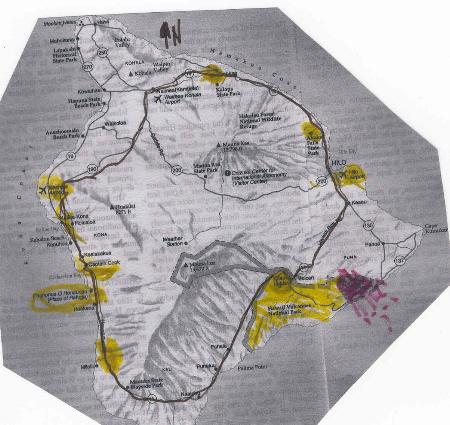 1Perhaps it was his fault! Sorry! He was a great man.